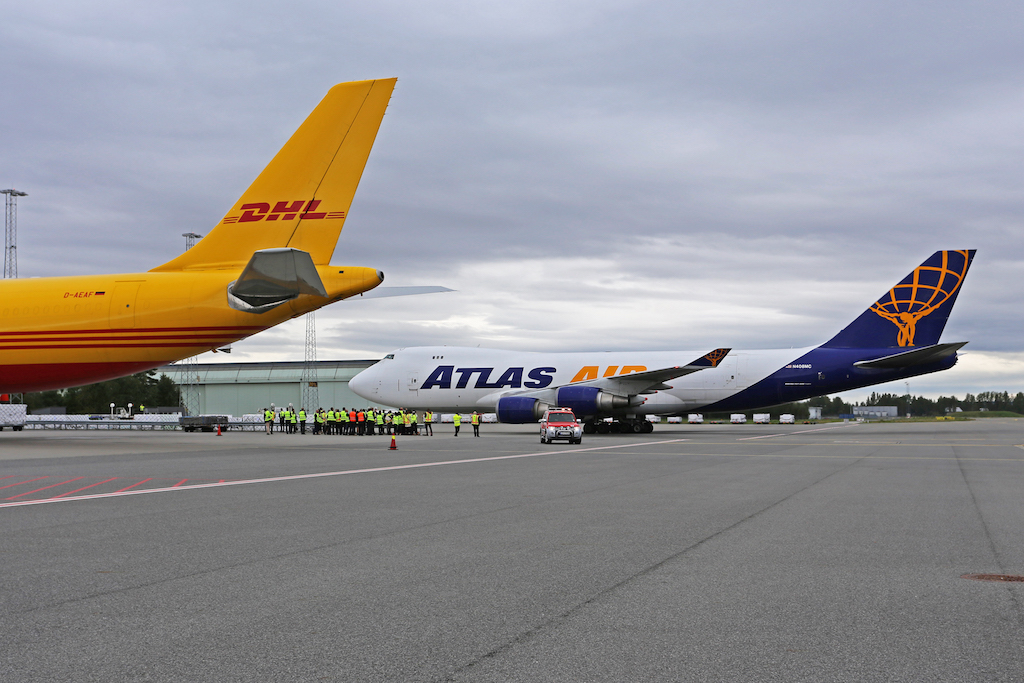 Norway’s Oslo Airport has teamed up with DHL Global Forwarding to establish a twice a week chartered Boeing 747-400 freighter link to Seoul and Shanghai, with the ambition of establishing a scheduled service.
The Norwegian seafood gateway, with a 32% general cargo growth so far this year, said that it is “further strengthening its role as the largest and preferred Nordic freighter hub”.
The aircraft, chartered from Atlas Air, will operate on Tuesdays and Fridays. It will start in Brussels and pick up the seafood at the DHL terminal in Oslo. From there it will be flown to Seoul, where the plane will be discharged and loaded with general cargo for its next destination in China.
This procedure repeats at the next stops in Shanghai and Cincinnati and prior to the return to Brussels.
Martin Langaas, director of cargo at Norwegian airport operator Avinor, said: “For the past year, we have been working closely with DHL Global Forwarding to establish new flights that can serve the strong global demand for Norwegian seafood and bring the different regions in Norway closer to the world markets.
“Avinor’s close co-operation with DHL has resulted in several new routes such as Lakselv and Seoul, increasing the competitiveness of Norwegian seafood exports and strengthening the position of Oslo Airport as the leading freighter hub in the Nordics.”
This move has government support, with the involvement of Norway’s minister of transport and communications, Ketil Solvik-Olsen, who said: “Seafood from Norway is popular in markets around the world. It is important to facilitate good international transport for these products.”
The market has been trying to find a way to transport seafood from northern Norway to Asia for some time, said Alvinor. Earlier this year DHL opened a cargo route from Lakselv to Oslo.
It added: “A new service from Oslo to Seoul and Shanghai will make it possible to transport fresh seafood all the way from Lakselv to Asia in a fast and efficient manner.
“We note that the service is starting out as a series of charter flights, which will be the basis for scheduled flights if the service is economically viable. We are pleased that this new service now becomes a reality.”
Henk Venema, senior vice president and global head of network carrier management at DHL Global Forwarding, said: “DHL aims to be the leading seafood logistics provider in Norway. Our work with Avinor has been very constructive, and we are delighted to be able to present yet another service designed for the seafood industry.
“This route will save our customer’s time on connections to South Korea, Shanghai and to the rest of DHL’s global network.”
Trond Ørjan Olsen, head of airfreight, DHL Global Forwarding, Freight Norway, said: "From Northern Norway, we will be providing an absolutely unique product for the region, with a connection to our existing service from Lakselv.
“We will be delivering seafood from Lakselv to the market in South Korea and China in less than 24 hours. With the launch of our new service to Seoul, we also expand our service from Lakselv from one to two flights a week.”
Oslo Airport expects its seafood traffic to increase by around 50% in 2017 thanks to the addition of new freighter services.
The Norwegian Airport expects to handle a total of 90,000 tonnes of seafood as air cargo this year as freighter services flying directly to import markets have been added.
Ingo-Alexander Rahn, global head of airfreight, DHL Global Forwarding, said: “Given our expertise in temperature controlled logistics solutions and rapid transportation by plane, we make sure that the seafood arrives at its destination in the best possible condition.
“Cutting the lead-time by more than 50% and providing seamless logistics processes, can furthermore help the Norwegian fishing industry to grow and win considerable market shares with high quality seafood around the globe.
"DHL does not only provide greater transportation capacities of fresh seafood to Asia, we overall contribute to the logistical accessibility of the region and improve the global supply of the time-sensitive goods.”