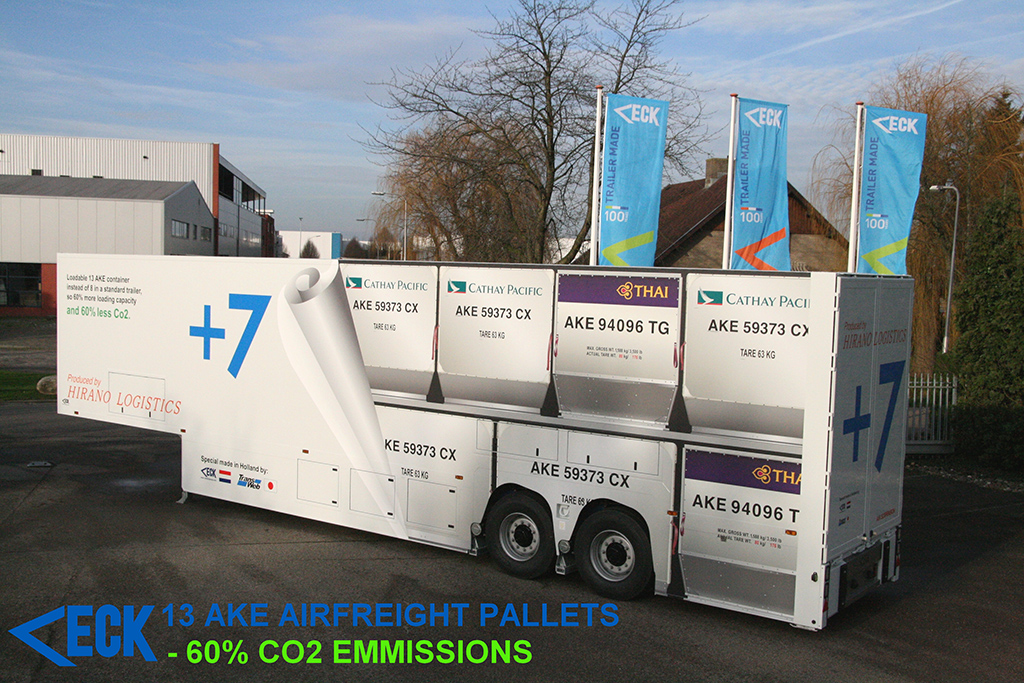 A double deck trailer which can carry up to 13 AKE air cargo containers with a 60% reduction in carbon emissions has been designed to transport ULDs between Japan’s Haneda and Narita airports.
Designed and built by Van Eck, the Netherlands-based road-transport equipment specialist, the customised trailer was commissioned by Japan’s Trans Web transport company on behalf of Hirano Logistics.
Said a spokesperson for Van Eck: “Trans Web asked us two years ago if we could develop a vehicle to transport as many air cargo pallets as possible, and which could be quickly loaded and unloaded.
“The design had to be solid and sustainable and comply with the Japanese legislation.  The main aim was a 60% reduction in CO2 emission.
With a load capacity of 13 AKE air cargo containers, Van Eck developed a double deck trailer with twin-axle independent suspension for Trans Web.
The 60% carbon reduction is calculated on the increased loading capacity of the new trailer design, compared with a payload of four ULDs or eight AKE containers in a standard unit.
The new trailer is fitted with a plywood superstructure that is self-supporting, and is equipped with a fully integrated roller conveyor system.
The trailer has an automatic hydraulic lifting platform with a lifting capacity of 3,000 kg, allowing containers to be loaded and unloaded from the dollies or loading bays via radio remote control.
The trailer is supplied complete with a Scania tractor. A further trailer has been ordered by Trans Web, and two more have been delivered by Van Eck to a client in the motorsport industry.