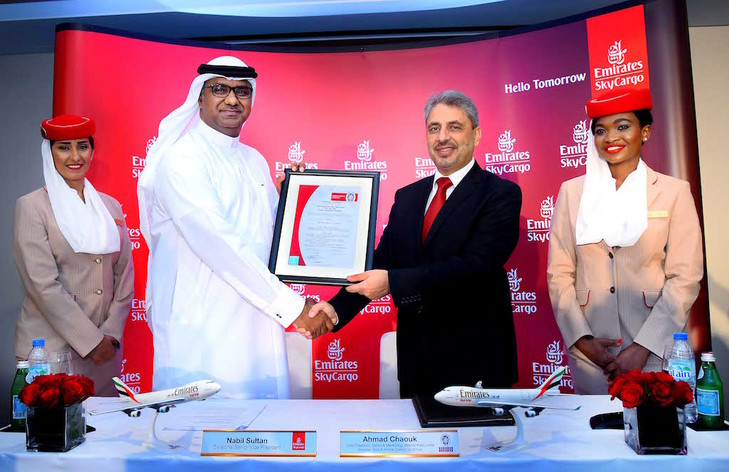 Emirates SkyCargo’s opening of a $190m dedicated pharmaceuticals handling centre at its Dubai home hub will help end a legacy perception in some sections of the industry that Middle East hubs are not pharma-friendly.
Nabil Sultan, Emirates divisional senior vice president, cargo, speaking at the opening of the Emirates SkyPharma facility, said: “Most of the Gulf companies are being avoided when it comes to transporting pharmaceutical products simply because of the hot temperature that happens here, especially in the summer, and which – to be honest – has presented a huge challenge for us.
“How do we overcome that challenge, what sort of processes and measures do we have to put in place to manage this whole issue of logistics, to ensure that there are no temperature spikes during transportation?”
The answer was a purpose-built extension at Dubai International Airport (DXB) that is compliant with the European Unions’ Good Distribution Practice guidelines for pharma and life science products.
Both the temperature-controlled pharma terminals at DXB and Emirates’ freighter aircraft hub at Dubai World Central (DWC), separated by a one-hour bonded reefer truck drive, are now GDP compliant and audited by the international compliance agency, Bureau Veritas.
Sultan added: “The fact that the [GDP] audit was conducted and successfully passed in the month of June earlier this year, during the peak of the summer season in Dubai, also demonstrates that Emirates SkyCargo capability to securely transport pharmaceutical product under extreme weather conditions.
“I’m pleased to say that we managed to overcome these challenges with innovative ideas and concepts and by linking the entire process from end-to-end.”
The Emirates SkyPharma facility, part of the new 11,000 sq m extension of Emirates SkyCentral terminal at DXB, offers 4,000 sq m dedicated to pharma cargo.
It features temperature controlled zones (2-8 degree Celsius and 15-25 degree Celsius), 88 temperature controlled individual positions in the automated ULD (aircraft pallet) handling system and five temperature controlled acceptance and delivery truck docks.
Both facilities have specialist cool chain equipment, including the Cool Dolly, basically a giant mobile fridge used either for the temporary storage of pharma goods or for transporting pharma products from the aircraft cargo door to the temperature-controlled terminal area.
Other product portfolio advances include the White Container ULD and White Cover Advanced, pallet blanket all of which are designed to prevent temperature fluctuations or spikes from occurring during any part of the transportation process.
And to emphasise the certification point, Sultan added: “We are the first Middle Eastern airline in the Gulf and Middle East to be GDP compliant but we are also first in being certified as a multiple hub combining both airports and the bonded trucking between them. We are also first in the world to be certified that sort of level.”
While the cool dolly is impressive, regional rivals Qatar Airways and Etihad have their own tarmac transfer systems, including reefer trucks, for exchanging pharma goods in a controlled temperature environment. They also have dedicated pharma facilities at Doha and Abu Dhabi airports.
Asked about Emirates’ potential pharma market share, Sultan told journalists: “The global pharmaceutical industry is booming and it is at the moment forecast between 2014 and 2018 it is estimated to be growing at a pace of 20% to 22% which is a huge growth.
“Along with this there is also a growth in the demand for GDP certification and this is why I express my pleasure that Emirates SkyCargo is again taking the lead and is the benchmark in the region to achieve such goals.”
There is a debate in the industry about which is the best pharma friendly certification badge to wear, with some airports going down the GDP route, while others opt for IATA’s Centre of Excellence for Independent Validators (CEIV) certification.
Asked about its chosen compliance route, Sultan said that a wide-ranging pharma customer survey by the airline indicated that manufacturers preferred the carrier to follow the same GDP standard that is used by pharma producers.
The Emirates cargo boss continued: “Therefore it makes perfect sense to us to become GDP compliant rather than anything else. The decision is driven purely by our customers’ needs and requirements.”
The next stage, after hub certification, is to look at specific origin and destination city pairs where the carrier needs to be GDP compliant, a process described as “work in progress”.
While acknowledging this as a “mammoth task” due to the diverse nature of the organisations involved, including local ground handlers, Sultan added: “I suspect that with a year or so we should be able to put something together.”
It was suggested that some pharma manufacturers may be looking at direct point to point pharma flights rather than the global transit hub approach that is the Emirates cargo business model.
Sultan referenced Europe’s leading pharma production centres, Germany and Switzerland, which account for around 50% of global traffic, primarily to Asia, adding that India pharma producers, a short flight from Dubai, accounted for 30% of the global market, mostly sending goods to the US.
He added: “in my view, Dubai’s position is just about right, in being able to cater for this huge growth in pharmaceuticals in a catchment area which is right next to us.
“Given the number of flight frequencies that we have across India, plus the infrastructure we have launched today, we have the capability of managing the transportation of this huge pharma movement across the globe much more smoothly.”
Hence Sultan’s view that Emirates SkyCargo will keep pace with the pharma industry’s double digit global growth, helped by its “quite minimal” market share at present.
He continued: “We have shied away from shouting about it [pharma], because we were simply not ready and the last we want to do is to go and commit ourselves to our customers and failed to deliver.
“Now is just about the right time and communications already gone out to our partners across the globe and we asking some key manufacturers about how we can cooperate further.”