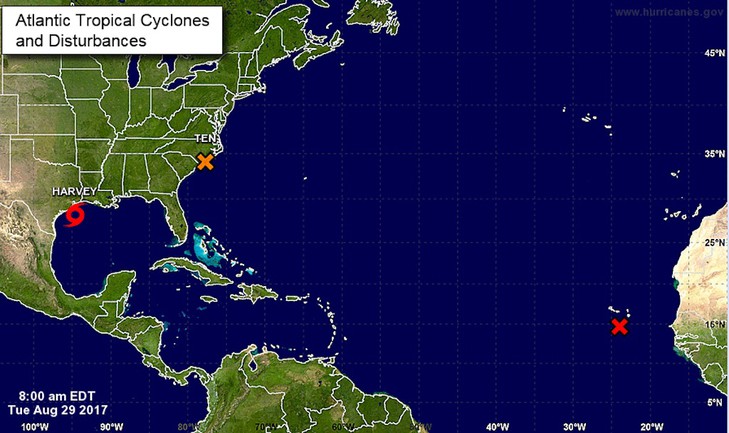 US Customs and Border Protection (CBP) and the Federal Aviation Administration (FAA) have issued updates on airport closures and manifest processes affected by Hurricane Harvey and the subsequent tropical storm which has caused severe flooding in Houston and the state of Texas.
In its update, the FAA said that it has continued to handle emergency and relief operations at a number of airports in the Hurricane Harvey area, including at Houston Hobby and George Bush Intercontinental.
In a message to commercial passengers the FAA stated: "Passengers should be aware that resuming normal airline operations will take time and airlines may not be operating a full flight schedule immediately after the airports reopen.
“Although airports may be listed as ‘open’, flooding on local roadways may limit access to airports for passengers, as well as the employees who work for the airlines or at the airport.”
US parcels giant FedEx confirmed that it has suspended service in some parts of Texas.
In an air manifest update, the CBP stated: “Commercial trade operations at the Ports of 2101 (Port Arthur), 5301 (Houston Seaport), 5309 (Houston Airport), 5310 (Galveston), and 5311 (Freeport, TX) are temporarily suspended for the following dates Wednesday, August 30, 2017 through Friday, September 1, 2017, due to Tropical Storm Harvey.
“Exporters that are able to divert their export cargo are encouraged to do so. The exporters or their filing agents should make every effort to correct and update the Electronic Export Information (EEI) filings within the Automated Export System to reflect the new port of export, the date of export and the carrier information.”
CBP suggests that prior to amending the EEI, “exporters, freight forwarders, or the authorised agents; if capable, make efforts to determine if the cargo was damaged. Exporters will need to make business decisions to either update or cancel the EEI.”
It adds: “If adjustments in the quantities or values of cargo being exported under an export license or license exemption/exception, the exporter or their authorized agent should first attempt to amend the EEI filing to reflect the corrected information for the shipment."
Regarding air cargo manifest processing for fish & wildlife (FWS) products, the CBP advises : “Should an entered shipment containing FWS products be diverted to another port, the guidance in CSMS 17-000521 remains, in that the CBP entry can remain with the original port code; no new entry needs to be submitted.
“However, should the filer/importer not have already received FWS clearance, they must resubmit the FWS eDECs entry. For example, if an eDec is filed in the Port of Houston but has been diverted to the Port of Miami, the eDecs entry will need to immediately be re-filed to reflect clearance at the Port of Miami. The diverted merchandise must not be picked up from the carrier’s premises until the FWS release is obtained.”
Meanwhile, FedEx plans to write “a seven-figure cheque” and lend its transportation services to areas affected by Hurricane Harvey.
The Memphis-based company announced a $1m cash commitment and volunteered to help transport medical aid and supplies. FedEx said it supports disaster relief efforts through the American Red Cross, Direct Relief, Heart to Heart International, Salvation Army and Team Rubicon. This aid falls under the company’s FedEx Cares “Delivering for Good” initiative.
“Our thoughts and prayers are with the millions of people affected by this unprecedented storm,” said David Bronczek, president and chief operating officer of FedEx Corp, adding: “FedEx will continue to work closely with humanitarian and disaster relief organizations to provide support and deliver supplies to assist those hardest hit by the storm.”
FedEx has suspended service in some parts of Texas and is recommending customers to access its FedEx Service Alerts website to see the affected ZIP codes.
"Our priority is always the safety of our team members and providing service to our customers,” said Chris Allen, spokesperson for FedEx.
“FedEx has implemented contingency plans to lessen the effect of Hurricane Harvey on operations and mitigate potential service delays. We are also supporting organisations such as Direct Relief, American Red Cross and Heart to Heart, which are providing necessary supplies to those impacted by the storm.”