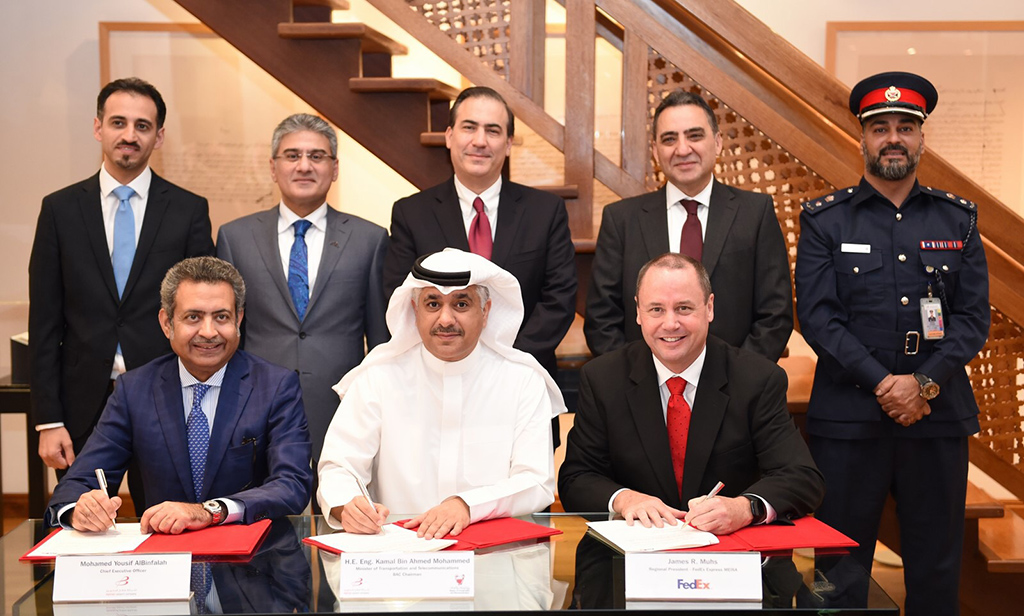 US parcel giant FedEx has signed a letter of intent for warehouse space at Bahrain International Airport’s (BIA) new 25,000 sq m cargo area, sited near the northern runway.
The facility, which has two further tenants waiting in the wings, comprises warehouses, aircraft parking, and associated infrastructure aimed at handling air cargo traffic and e-commerce.
FedEx has taken a total of 9,000 sq m of which 5,000 sq m will be warehousing and the rest will be manoeuvring area.
Bahrian’s transport minister and Bahrain Airport Company (BAC) chairman, Kamal bin Ahmed Mohammed, said: “BAC has a comprehensive plan to attract prominent cargo companies to the Kingdom, which will strengthen Bahrain’s strategic position as a leading provider of efficient logistics services in the region.”
Speaking at the signing ceremony with FedEx, the minister added: “We are currently negotiating with two other companies wishing to operate warehouses at the new cargo area, which further demonstrates the Kingdom’s strong reputation as a regional hub for logistical services in the GulfCooperation Council (GCC)  and wider Middle East.”
He added: “The new air cargo area that BAC is constructed north of the runway is an important part of the overall growth strategy adopted by the Ministry of Transportation and Telecommunications, and a key component in the Airport Modernization Program (AMP), which is due to be completed by the third quarter of 2019.
“It also reflects the important steps that the company is taking to enhance the airport’s infrastructure and increase its ability to accommodate rising local and regional demand. The new cargo area will create more job opportunities and enable the airport to handle larger volumes.”
FedEx Express Middle East, Indian Subcontinent and Africa (MEISA) regional president James Muhs said: “The GCC is an important region for FedEx Express, where enhanced collaboration between public and private sectors is fueling growth across industries. The logistics market forms a fundamental part of the GCC economy, and we remain committed to serving our customers across Bahrain, and connecting them with people and possibilities around the world.”