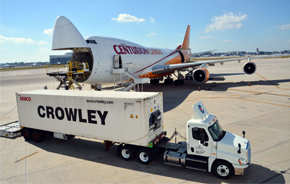 A 10-ton consignment of snow peas on board a vessel from Guatemala saw the launch of a pilot programme to develop sea-air traffic from Latin America to destinations across the Atlantic as well as in Asia.
The Crowley Maritime ship sailed on January 26 on a course for Miami International Airport (MIA) via Port Everglades.
Customized Brokers, a Crowley subsidiary, partnered with MIA to create the new programme – nearly four years in the making – which evolved during a lengthy dialogue with US authorities, notably Customs and Border Protection and the Department of Agriculture.
The initial result of this was a permit for the broker to move cargo from Central America through the Port of Miami and Port Everglades for uplift from MIA. In addition, customs has for the first time given its blessing to expedited processing of sea-air cargo.
Ernie Rodriguez, Miami-Dade Aviation Department section chief, who spearheaded the initiative from the airport side, stresses that the new sea-air service offers shippers vastly better transit times.
Transportation from Guatemala to Europe by ocean vessel takes in excess of two weeks, whereas the new mixed mode offers transit times of five to six days.
“This means the shipper can do one more rotation of buying and selling. He can go to a weekly cycle,” he says.
According to DHL Global Forwarding, sea-air is on average 30%-50% faster than ocean transportation and 30%-50% cheaper than airfreight. The downward pressure on air cargo rates has eroded the cost savings somewhat.
Bob Imbriani, executive vice-president, international at logistics provider Team Worldwide, notes that combining two modes brings in two different sets of charges. Shippers should look at the total cost, he warns.
At this point, the programme is fairly narrowly defined. The permit covers two points of origin − Guatemala and Honduras − and three commodities: snow peas, broccoli and okra. The idea was to start with relatively straightforward crops that had little risk of pests in the shipments, explains Rodriguez.
He expects both the range of perishables and the geographical reach to extend: “We will work on blueberries and cherries from Chile in the near future,” he says. “I think Chile will be one of the key countries for us.”
The authorities are also putting a lid on volumes. The permit allows Customised Brokers to bring up to five containers a week into the system.
However, Rodriguez says that two other brokers recently obtained permits as well, which should boost the volume to 15 containers a week – roughly 220 tons of cargo.
Incoming consignments cannot be split but have to move on a single flight. This is one aspect that favours freighters, but more importantly, security rules also dictate that only all-cargo aircraft are in the running for MIA’s sea-air throughput at this point.
Shippers at overseas origins are not considered known shippers by the Transportation Security Adminis-tration, and there is no chain of custody to match the requirements in US security regulations for air cargo, Imbriani points out.
This gives Miami an edge over likely competitors in the region, given its main deck connections.
Rodriguez points out that MIA has 14-16 weekly freighter flights to Europe and 17-19 departures a week to Asia. These two regions are seen as the primary destinations for the perishables coming up from Latin America under the programme.
“We have four Asian carriers with freighters here. They are ready,” says Rodriguez.
Mark Sutch, general manager of cargo marketing and sales at Cathay Pacific, reports that the carrier was waiting for Crowley to finalise some permit issues.
The sea-air concept is not new to the Latin American arena. Traffic has gone through Mexico and some Caribbean points, but they lack cooler facilities, which are vital, Rodriguez says.
DHL has developed some sea-air traffic through Panama, making use of the express division’s regional hub there.
Much of this has been southbound cargo, arriving by ocean vessel from Asia for airfreight connections to Latin America.
A spokesperson for DHL’s  forwarding arm reports that the company decided not to go ahead with a planned sea-air offering to a customer from the technology sector due to invoicing issues, so it now offers ocean and air services separately.
Team Worldwide has no plans for sea-air: “It is something that comes up once in a while. It has some limited function and appeal,” comments Imbriani, pointing to the complexity of the concept.
Not surprisingly, Rodriguez is bullish, reporting lively interest both among shippers and carriers. “The key is frequency, cost and service,” he comments, adding that MIA’s fledgling service offers strong benefits both in terms of transit time and cost.
And while most perishables are seasonal, the amount of different types ensures that the programme is viable at the airport on a year-round basis.

IAG Cargo is continuing to target Latin American demand with new routes and increased frequencies to the region. The cargo…