Forwarders on a guided tour at the new Moscow Cargo terminal 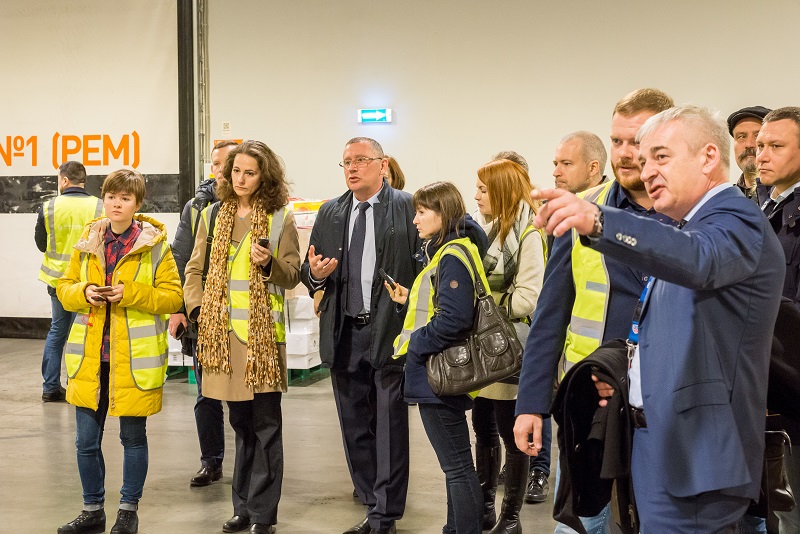 Moscow’s Sheremetyevo International Airport has presented its new showpiece cargo terminal to airlines and freight forwarders.
Moscow Cargo, the largest cargo complex in Russia, covers an area of 42,300 sq m and has a handling capacity of 380,000 tonnes per year.
Construction work started in March 2016 and was completed in July 2017, after which all cargo operations on domestic flights were moved to the new terminal by September 2017. The transition of cargo operations on international flights was completed in January 2018.
Construction of the cargo complex was carried out within the Long-Term Development Program of Sheremetyevo International Airport which runs until 2026.
A spokesperson for Moscow Cargo said: “The new cargo complex meets international standards of the ground cargo handling and exceeds the level of technical equipment at other similar facilities in Russia.
“The cargo complex is equipped with a unique system for automated storage and processing, manufactured by Lödige. Automation level of production processes reaches 60%.”
There are independent container and bulk storage areas with unified automated operating systems in the terminal.
“Moscow Cargo is capable of handling all types of dangerous cargo including explosive and radioactive materials,” added the spokesperson.
The terminal’s pharma storage facilities allowed AirBridgeCargo to obtain IATA’s CEIV Pharma certification.
Moscow Cargo is equipped with a “comfortable client’s area” including an electronic queuing system and 20 counters for shippers and consignees to obtain documents and make payments.
Clients can inquire about the cargo handling status, print cargo tags and safety declarations through the personal account on the Moscow Cargo website.
Sheremetyevo plans to handle over 700,000 tonnes of cargo per year by 2024, and to meet this target the design and construction of the second stage of the cargo terminal, with an additional capacity of 380,000 tonnes, will start this year.
Moscow Cargo is equipped with seven-level automatic storage and retrieval system (ASRS) that has 3,198 loose/pallet cargo storage locations. There is a sizeable four-storey pallet container handling system (PCHS) with a storage area for 576 ULDs, 60 of which are specially designed for temperature-sensitive containers.
The complex has 13 conveyor lines with an access to the apron, 29 stations for cargo reception and delivery equipped with truck docks and dock shelters, two of which are designated for heavy and oversized cargo, including cars, and two for express cargo and courier parcels.
Read more Cargo Airport News