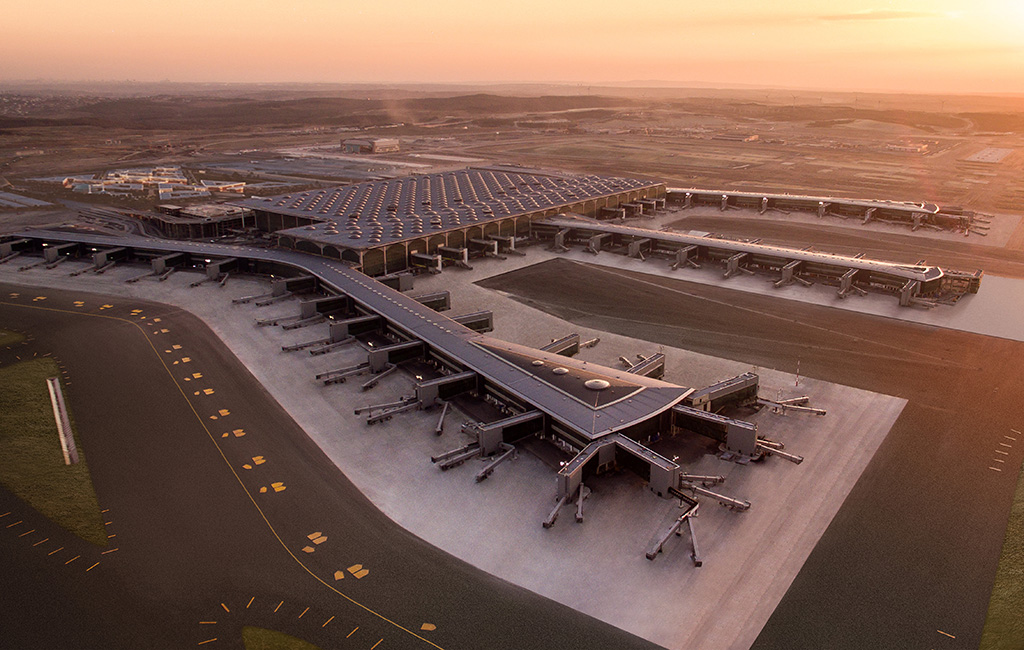 This week’s full opening of the new Istanbul Airport for passenger flights has been delayed for the second time, until March 3, according to press reports.
Turkish Airlines and other carriers were scheduled to launch passenger services at the final phase €10.5bn hub on Tuesday after a mass migration of airline staff and 14,000 airport support vehicles from Istanbul’s current hub, Ataturk Airport, on December 30-31.
The overnight transfer did not take place and added to a previous project delay. The airport was due to begin with a full schedule of passenger flights on October 29 last year, although that was scaled back to a “soft opening” of just five flights a day, with early January 2019 established as the new start date.
The plan is for freighter operations to make the switch later this year, when Ataturk closes to commercial use.
İGA Airport, the group which built and will operate the Istanbul hub under a 25 year concession, said that 66,000 passenger have used the facility since late October.
Kadri Samsunlu, chief executive of İGA, said today: "The airport will be commissioned at full capacity in a matter of weeks. All is ready for the occasion.”
Media representatives of İGA Airport confirmed that DHMİ, the Turkish General Directorate of State Airports Authority, has shared an official statement on the situation.
The spokesperson said that there will now be “a step by step movement from Atatürk Airport to Istanbul Airport”.
A BBC Turkish language report said that the DHMI had sent a letter which attributed the postponement to “possible adverse weather conditions”.
Reuters, citing Turkey’s Milliyet newspaper, said that the January launch date “had been pushed back until early March,” adding: “Videos posted on social media since then have shown rain leaking heavily into a waterlogged passenger terminal, and a flooded car park at the new airport.”
Samsunlu told journalists in October last year that the airport will open in four phases, the first of which can handle 90m passengers per year on two runways, with a third runway opening earlier in 2020. There will be up to six runways operational by the final phase.
İGA today announced that it has completed a second capital increase, raising its capital to TRY7.4bn from TRY 6.2bn. Following the most recent capital increase, the contribution of shareholders since the establishment of İGA has exceeded €1.7bn.
Samsunlu stated: "Istanbul Airport is a major project launched to mark Turkey’s future. We embarked on this journey with a vision to make İstanbul the global aviation hub.
“Our shareholders have reaffirmed their confidence in Turkey’s economy by raising the capital for a second time during the year 2018."
Samsunlu added: "Following the big move, a new era will commence at İstanbul Airport for both our country and our region. In the first six months of 2018, the number of passengers flying from the existing two airports in İstanbul was close to 49m.
“I believe we will be hitting the 70m passenger mark this year. İGA’s capital now matches those of the largest companies in Turkey. Once the operating period starts, İGA will be making a significant contribution to national economy in terms of both employment and turnover."
There is a clear need for a new airport in Istanbul as slot constraints at Ataturk have stopped new passenger airlines and cargo services from launching.
Ataturk airport is full and handled 1.2m tonnes of cargo in 2017, while the new hub will have immediate capacity for 2m tonnes and a final phase target of 4.5m tonnes per year.
Turkish Cargo confirmed in October — prior to the latest airport delay — that it intends to move its freighter operation from Ataturk to the new hub later in 2019, where it will be joined in 2020 by integrators DHL and UPS. FedEx is also considering its options.
The Turkish flag carrier and the express operators are building their own facilities in Cargo City, the new airport’s dedicated airfreight area located between the two main runways for easy access to the ramps.