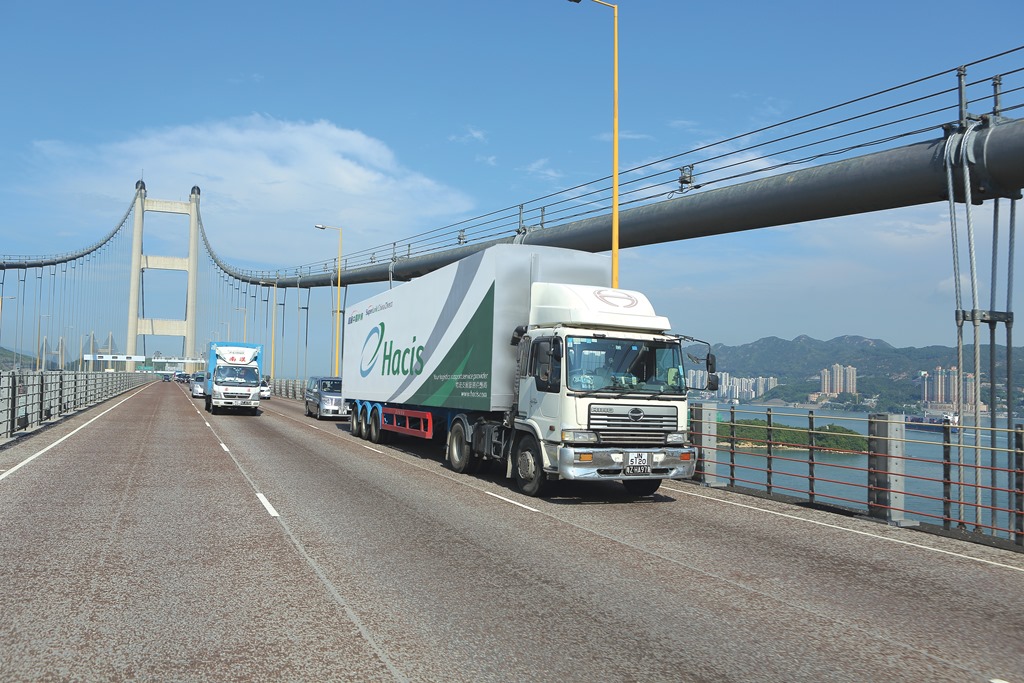 Hactl-owned logistics firm Hacis is hoping to capitalise on the opening of the Hong Kong-Zhuhai-Macau bridge − set to be completed over the coming year – with the addition of a new depot.
The bridge, which also includes tunnels and connections to other areas, will connect directly into Hong Kong International Airport, expediting the flow of traffic between Macau and the world’s busiest cargo airport.
Hacis managing director Vivien Lau said the company was currently looking to add a new inland depot to capitalise on the opportunity presented by the bridge.
“[The bridge] will give us the opportunity to really reach out on the western part of the delta.
“Nowadays the travelling time to reach Zhuhai and Macau is at least an hour because the only way to get to these areas is by ferry or boat.
“With this bridge those transportation times will be shortened to 30-40minutes. We hope the air cargo will be there and we can capture that so we are currently looking to open another depot.”
Lau said it was unlikely that the depot would be in Zhuhai and added that a site had been identified at a location close to the end of the bridge and Macau.
“There is still a year to go, so for us, we need to prepare ourselves in advance because I’m sure that once it is open a lot of people trying to get the business from there.”
The new depot will add to Hacis’ existing eight facilities located in the Guangdong and Fujian provinces, with road feeder service connections to more than 60 cities.
Hacis has been concentrating on expanding its logistics network over the last couple of years and added new depots in Dongguan Liaobu and Guangzhou Nansha, while also launching its SuperLink Express Lane.
The express lane was launched in 2016 to capitalise on the growth of e-commerce by providing direct connection between the airport and shippers’ own facilities, rather than transiting through the Hacis depots, to speed up transportation times.
At the moment the express lane provides services to four cities in the Guangdong province and one city in the Fuijan province, but Hacis is hoping to add to the network.
As well as catering for e-commerce through the creation and expansion of its express lanes, the Hactl-owned logistics company is also building up its capabilities at its depots.
“When cargo comes through Hactl, we are able to provide value-added services if they need their cargo to be re-labelled, broken down, re-sorted, for example,” said Lau.
“But there is more to it than just re-labelling and sorting − in Nansha, one of the newly opened depots, we receive special treatment from Chinese Customs when dealing on the piece level.
“Previously, when shipping as general cargo, the whole pallet would be treated as a single item.
“Now they allow us to break it down and distribute it out at a piece level and also there are some special license exemptions that help customers save on the tax.
“For example, if they are importing directly to China they may be required to pay a special tax, for example for baby formula, but if they go through the Hacis transhipment services they will get an exemption. That’s why we attract a lot of baby formula through Hong Kong.”
The company has also invested in screening technology to improve the processing of cargo.
In the future, Lau expects the industry will need to adapt to the processing of shipments  at a piece level, if it is to fully capitalise on the growth of e-commerce.
“We don’t have any plans yet, but if we want to focus on e-commerce, we will look at sorting systems and eventually automatic scanning.
“It really depends how it evolves because as long as it is managed on an air waybill basis I think we are still okay, but once it is at piece level, as an industry it will be a big challenge.”
“I notice that some freight forwarders are already installing those sorting systems so once they are doing it, then eventually the cargo terminals will be handling those cargoes.”
Lau also holds the position of Hactl executive director and one development she has noticed in the ground handling side of the business is the increase in the number of charter aircraft being processed.
“We are seeing a significant growth in numbers – [charter traffic] has increased by 50% since last year.”
She said this is in part down to the creation of a specialist charter team and a general increase in air cargo demand since the last quarter of 2016, but also the amount of mail now being flown.
“Postal mail has been one of the key suppliers for the charters, which could again be down to e-commerce.
“In the old days we put all the mail in AAU containers but now that no longer meets the requirements.”