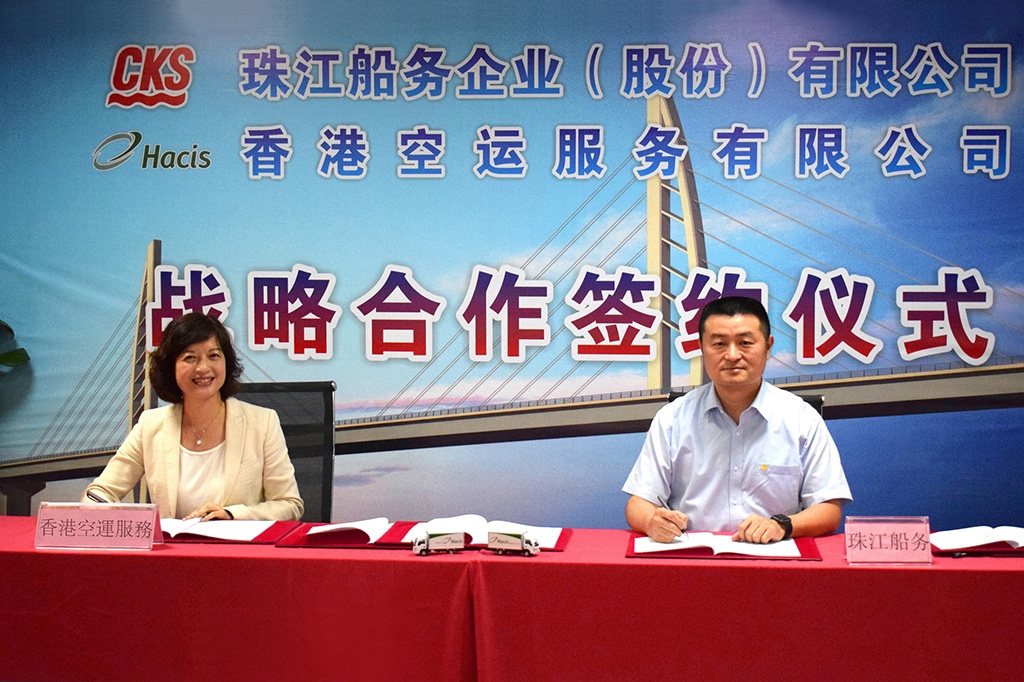 Hong Kong Air Cargo Industry Services (Hacis), the logistics arm of Hong Kong Air Cargo Terminals Limited (Hactl), has entered into a strategic partnership with Chu Kong Shipping (CKS) covering the development of joint logistics activity in the western part of the Pearl River Delta (PRD).
The first project on which the two parties will collaborate is the creation of a new inland cargo depot in the Zhuhai Free Trade Zone. Hacis will co-operate with CKS subsidiary Civet (Zhu Hai) Logistics Co, which operates its own port facility in Zhuhai Free Trade Zone.
This will bring the number of Hacis depots in the south of mainland China to nine and, according to the logistics operator, enable it to realise its long-stated ambition to further develop its SuperLink China Direct (SLCD) road feeder service network while establishing a strong local presence in the Zhuhai area, thereby taking full advantage of the imminent opening of the Hong Kong-Zhuhai-Macao Bridge (HZMB).
The depot will serve both Macao and Zhuhai.
All Hacis depots are linked to Hong Kong International Airport (HKIA) through scheduled express road feeder services. The opening of the HZMB is expected to cut trucking times between the western PRD and HKIA by around two-thirds.
The western PRD region is home to many electronics manufacturers and technology companies but many of these are heavy users of ocean, rather than air, freight shipping services. Hacis and CKS are seeking to convert many of them to airfreight, piggybacking on the HZMB enabling a faster and more cost-effective connection to HKIA.
“Hacis has a long-term plan to expand its SLCD services to the western PRD, further enhancing HKIA as a regional air cargo hub and transshipment centre,” informed Hacis managing director Vivien Lau.
“This new depot will enable us to fully support airlines wishing to extend their networks to the cities in the western PRD.
“Civet’s advantageous location next to the HZMB, and its considerable experience in running port facilities in Zhuhai, makes it an ideal partner to maximise SLCD’s opportunities in the area,” she said.
Roger Cheng, director & vice general manager of CKS, added: “The partnership with Hacis will further promote multi-modal logistics in the western PRD, and assist in the development of the Greater Bay Area, in line with Central Government Policy.
“We are also exploring mutual cooperation in other ports such as Doumen,” he said.
Read more ground handler news