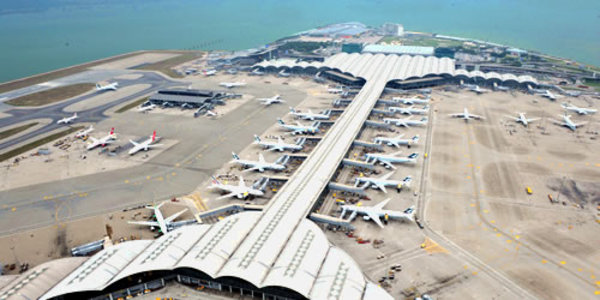 Hong Kong remained the world’s top cargo hub, as preliminary data from Airports Council International showed that global airfreight volumes rebounded 4.7 per cent in 2014 after three years of stagnating growth.
World airfreight volumes ended the year with an increase of 5.6 per cent in December. On an annualised basis, international freight traffic increased by 5.7 per cent, while domestic freight increased by 2.6 per cent on the year.
Said ACI: “Despite the uneven recovery in the global economy there is a net increase in global demand for foreign goods and commodities. This helped awaken the airfreight market in the last quarter of 2013 and into 2014 after several years of flat growth.
“The overall flow of exports and imports by sea, land and air, measured by world trade volumes in goods, has experienced a rising growth trend.”
ACI said that the African airfreight market grew by 3.8 per cent in 2014. While Cairo (CAI), one of the highest ranking airports in terms of airfreight in Africa, grew by over eight per cent, Johannesburg JNB, another leading freight hub, had a drop of 6.4 per cent in freight volumes in 2014.
“As a major airfreight hub that handles a significant proportion of Africa’s global freight volume, JNB’s decline contributed to the subdued growth on the continent.”

Despite the Asian slowdown, which has been led by China, growth in airfreight volumes in the Asia-Pacific region remained relatively strong with growth of 5.7 per cent at the aggregate level in 2014.
Said ACI: “This can be attributed to stronger external demand and export growth. A rise in American consumer spending fuelled China’s exports of high-tech goods such as tablets, laptops and mobile phones.”
The top global airfreight hub, Hong Kong (HKG), had an increase of 6.1 per cent in traffic, putting it over 4.3m tonnes for the year.
Shanghai (PVG) and Incheon (ICN), the region’s second and third ranked busiest airfreight hubs, had year-over-year increases of 8.6 per cent and 3.3 per cent respectively.
Tokyo’s Haneda (HND) achieved double-digit growth of 14.7 per cent, which put it over one million tonnes in 2014.
Following a weakened Euro area 2013, most European airfreight markets “appear to be in recovery mode”, as higher growth levels were achieved in 2014.
Airports in the region recorded an increase of 3.6 per cent in airfreight volumes in 2014, said ACI, adding: “More obstacles may be on the horizon for the European airfreight market given the ongoing geopolitical concerns in Eastern Europe and the risk of another Euro area crisis.”
With weakness in the Brazilian and Argentinian economies, freight volumes in Latin-America-Caribbean were almost flat in 2014 as compared to the previous year. The figures were relatively mixed for Latin America-Caribbean for the year as a whole.
In the Middle East, While Dubai International DXB occupied the lion’s share of regional airfreight at over 2.4m tonnes, volumes decreased by 3.1 per cent in 2014.
With capacity for 12m tonnes of airfreight, Dubai World Central (DWC) is now set to be the region’s future air cargo hub, said ACI.
The higher growth in North America coincides with a US rebound. Lower unemployment and inflation containment coupled with a stronger international trade sector has created ingredients for favourable growth.
ACI observed: “For a mature market, growth of 3.5 per cent in airfreight volumes represents a banner year. Two of North America’s leading airfreight hubs posted gains in freight volumes for 2013. Memphis (MEM) and Louisville (SDF), home of FedEx and UPS respectively, increased by 2.8 per cent and 3.5 per cent respectively.
“The biggest gains were achieved by Chicago-O’Hare (ORD) with volumes moving up by 11.4 per cent. The growth is expected to continue with the investment in the airport’s Northeast Cargo Center.”
ACI World’s economics director, Rafael Echevarne, commented: "Airfreight rebounded after almost three years of growth stagnation whereas passenger traffic continues to post growth in the realm of five per cent year after year following the Great Recession."
Did you find this article of interest, if so why not register for a FREE digital subscription to Air Cargo News? – Find out more