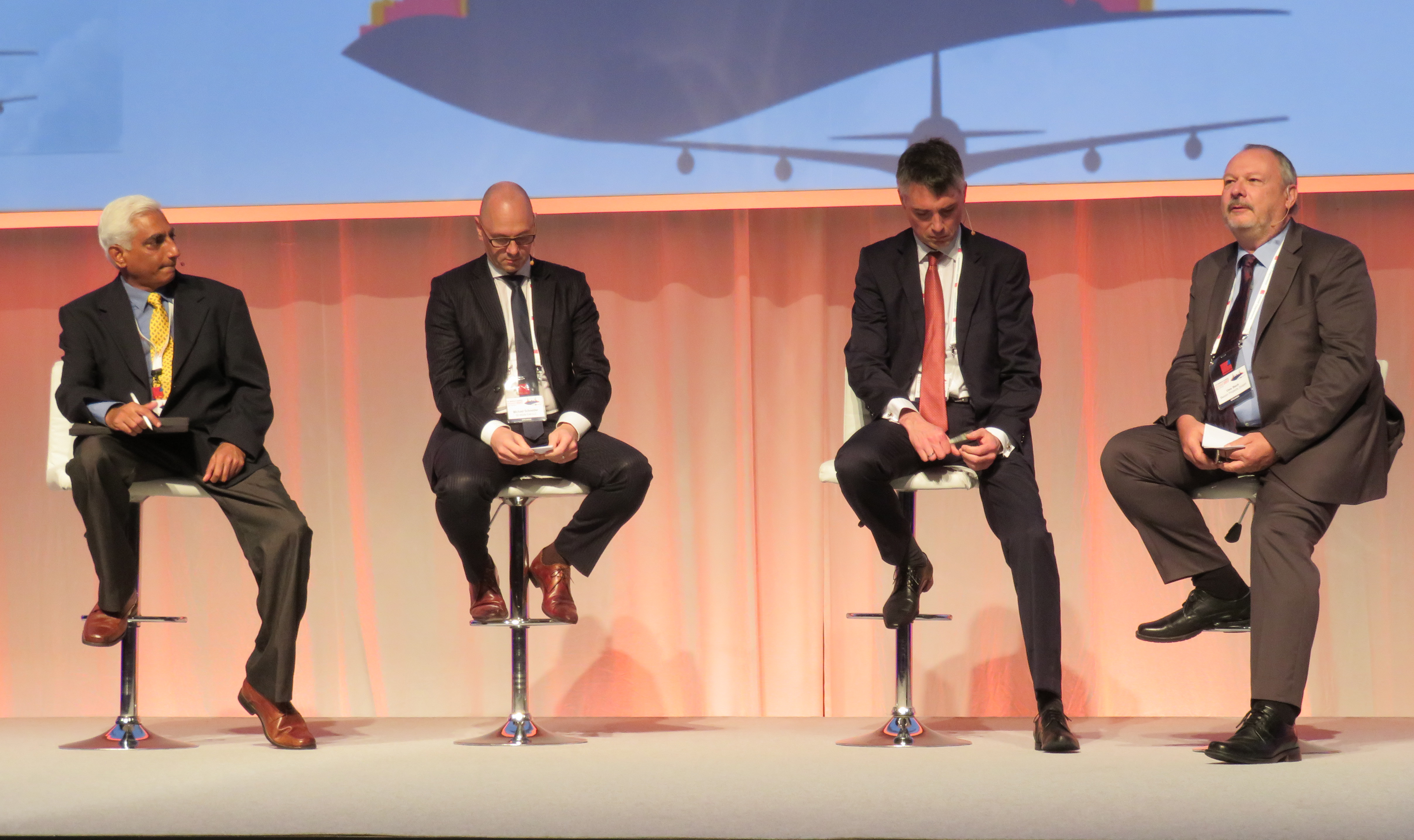 Cargo warehouses of the future will have smart devices, smart people and technology-driven ULDs transformed from “dumb boxes” to interactive equipment.
Those were some of the takeaways from the “cargo facility of the future” panel discussion at the World Cargo Symposium (WCS) in Abu Dhabi.
The air cargo warehouse of the past was “a busy, confusing place where every step had to be taken carefully,” said Venkatesh Pazhyanur, industry director freight solutions at Unisys, who added that today’s facility is “very quiet, with fewer people”.
He stated that that the Internet of Things, allied to sensors, will “detect a pharma shipment problem or a live animal in distress” so that corrective action can be taken immediately.
He argued that a combination of smart devices and advanced analytics will have an important influence on cargo terminals and warehousing at airports.
Michael Schneider, chief executive of Siemens Middle East, said that while we strive to move goods in the fastest possible way, either through mechanisation or automation, warehouse operators still needed to transfer data to the customer.
Pazhyanur agreed, saying that today there were still “massive search parties” sent out to find a piece of freight, and that app technology can now scan instantly to locate precisely where a shipment resides.
Panel moderator Uwe Beck, managing director of BeCon Projects, said that the old way of thinking, that a warehouse is a place to store goods for as long as possible, had been replaced by the need to move goods as quickly as possible either to the aircraft or the trucker and freight forwarder.
Phillipe de Backer, managing director and chief executive of Loedige, said that in order to reduce costs one had to reduce staffing levels but that attempts to introduce large scale automation had failed due to a lack of standardisation.
He said that airside operations were “manpower intensive”, adding: “We can automate but it is expensive and so we need standardisation [of equipment] to be efficient. It is a big jump and we need standards around dollies and ULD identification.”
Schneider made the point that automation requires programming, while any move to using artificial intelligence within the warehouse was “still in very baby steps”.
Cargo warehouse design, said Beck, was not currently top of the list in developing a facility: “First there is a plot of land, then there are architects, and then they think about the inside of the warehouse,” adding that the design of a hub differs greatly between those on and off the airport footprint.
Pazhyanur put a historical perspective about how machinery inside cargo terminals has changed and painted a picture of what is possible, while warning of the problems.
“We have moved from elaborate scanners to devices people own, and the next stage is wearable glasses to find ULDs. We have to focus on that, but collaboration is lacking between manufacturers of containers and vehicles.”
There remain obstacles and there is continued variety in warehousing on a daily basis, as Schneider summed it up: “No one day in a cargo terminal is the same. Every day we have a different challenge.”
De Backer took up the theme by stating that while the air cargo industry has “excellent access to operational data” few participants bothered to consider what happens “in the real terminal” adding that the cargo “out stations” can create problems by failing to provide the right data to the main hub terminal.
He also gave the cautionary tale of one [unnamed] terminal operator who replaced a 20 year old legacy system in the space of four weeks, leading to “a pure disaster” with late or inaccurate data leading to a huge backlog in Customs clearance, with manual input the only option.
While there is a profusion of available data, one panellist said that the industry was still living in the “stone age” while another took a more optimistic view that the air cargo industry has all the technology available to do better, albeit with some “suspect data” regarding weight and dimensions of goods.
For de Backer, the answer was clear: “We need full digitisation and the employees of today must have more of an IT background.”
But total engagement in digitisation by all stakeholders is a necessity: “When one airline does not do it, then we have a problem,” observed de Backer.
Making ULDs smarter and equipped with sensors that are able to “talk to airplanes” while in the bellyhold was one option in making receiving-terminals more efficient.
An industry expert among the audience, Bob Rogers, senior advisor with Nordisk Aviation Products, highlighted separate ‘smart’ ULD trials underway by both Air New Zealand and Delta Airlines.
Rogers spoke of a “crossover of technology and cost savings that is hitting a sweet spot”, and while it may not be appropriate for all 800,000 ULDs currently in service, “if we don’t make a start, we will never finish”.
He added: “The ULD has always been a dumb box but it has the potential to be a smart piece of equipment which is able to transfer information between parties that is currently being put on a piece of paper.”

Cargo.one raises $18.6m as it looks to triple in size

Digital booking platform cargo.one has raised $18.6m in venture funding in its Series A round to help it achieve significant…