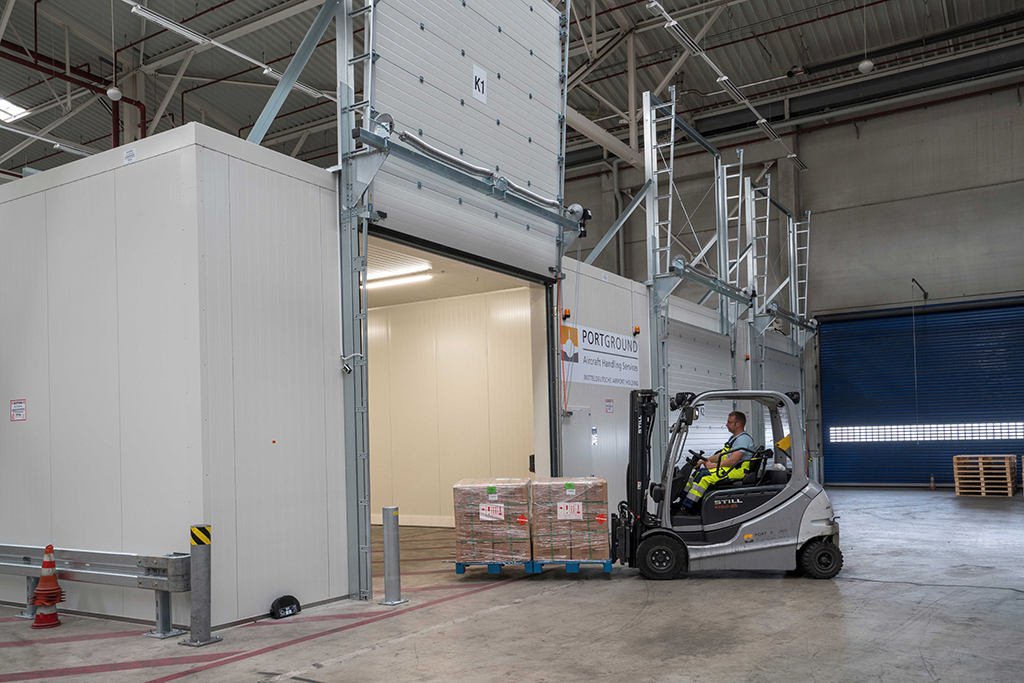 Leipzig/Halle airport‘s World Cargo Center has started operations at a new refrigerated warehouse.
The facility at the German hub has direct access to the apron area, offering short transport routes to and from aircraft and trucks.
Said an airport spokesperson: “The configuration of the refrigeration centre enables parallel storage of pharmaceutical items and perishable goods, as well as temperature-sensitive products, which may not be stored or transported in frosty or hot conditions. They include measuring devices or means of production for the semi-conductor industry.”
The commissioning of the site also marks the certification of the warehouse area according to the European Union’s Good Distribution Practice (GDP) standard.
Goods can be stored at temperatures ranging from +2°C to +25°C at the new refrigerated facility, which is operated by PortGround – a subsidiary of Mitteldeutsche Flughafen.
PortGround managing director Alexander König said: “The new refrigerated warehouse for airfreight expands our extensive logistics portfolio and is particularly interesting for companies in the pharmaceutical, food and semi-conductor industries in Germany and Eastern Europe.”
Earlier this month, DHL Global Forwarding’s airfreight station in Leipzig was granted Center of Excellence for Independent Validators in Pharma Logistics (CEIV) certification by IATA.
Leipzig/Halle Airport is Europe’s fifth-largest air cargo hub and handled just over 1m tonnes in 2016. Germany’s second-biggest airfreight gateway handled 84,782 tonnes of cargo in January this year, an increase of 6.9% over the same month of 2016.
DHL has been operating its European hub at the airport since 2008. The airport is also the hub for AeroLogic, a freighter joint venture between DHL Express and Lufthansa Cargo.