Lights on for first runway at Istanbul New Airport: VIDEO 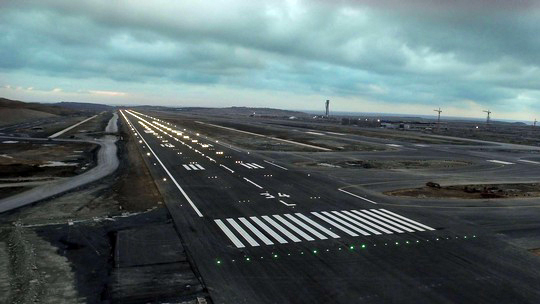 The lights have been switched on for the number one runway at the new Istanbul airport in Turkey which is scheduled to open at the end of October this year (Scroll down for video).
The first runway at Istanbul New Airport, claimed to be the world’s largest airport project built from scratch, measures 3,750 metres and is 60 metres wide.
IGA Airports Construction said that 80% of the initial phase is completed at Istanbul New Airport which will have three independent parallel runways operational as part of the first phase.
The first runway, now primed for flights, features 34,183 LED fixtures. The lighting system was designed to meet the international standards.
Yusuf Akçayoğlu, chief executive of IGA Airports Construction, said: "We are working day and night for this project, which will put Turkey’s stamp on the history of aviation. The completion of the first phase draws nearer with every square meter built. We have recently finished the baggage system, which constitutes our airport’s core.
"And now we have made the runway number one ready for landing with all the required equipment and in compliance with the relevant global standards. We are looking forward to deliver Istanbul Airport in its entirety on 29 October 2018.”
Istanbul New Airport is set to serve approximately 100 airlines and become the new aviation hub with 350 destinations in passenger and cargo transportation worldwide.
The initial phase with a passenger capacity of 90 million will be commissioned with three independent parallel runways, taxiways, a terminal building, an air traffic control tower, communication and weather systems as well as other utility buildings.

Turhan Özen, the boss at Turkish Cargo, talks about the airline’s airfreight ambitions in the latest edition of Freighters World magazine. 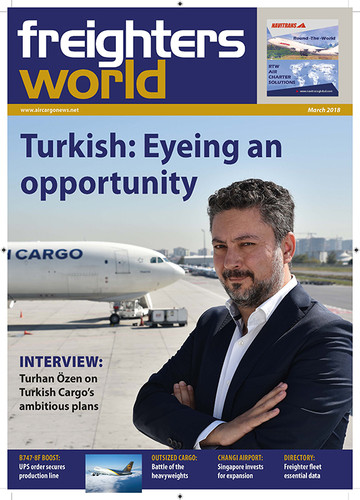