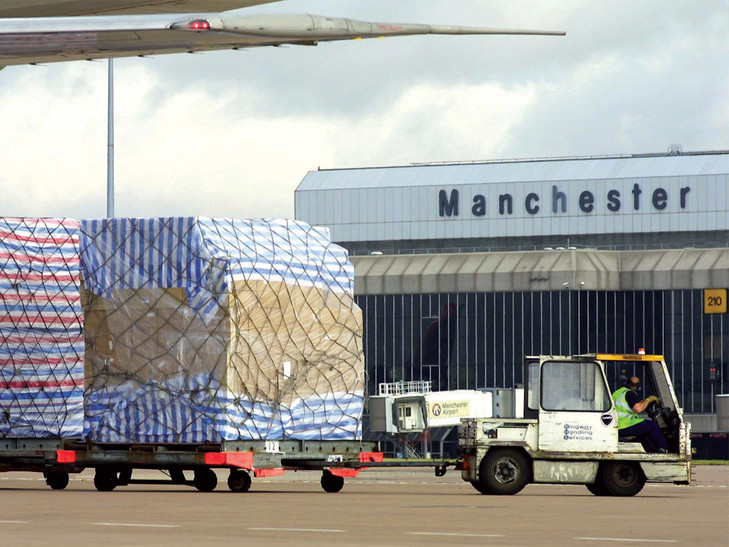 UK airport operator MAG saw revenues generated through its cargo business increase by 3.8% year on year during the first half of its financial year.
The MAG Group, which operates East Midlands, Manchester and Stansted airports, said that improvements in cargo revenues in the April-September period were driven by new all-cargo flights and e-commerce.
“MAG Cargo’s income has continued to benefit from growth in e-commerce and internet shopping, with integrated express carriers expanding their operations,” it said.
“MAG’s pure cargo operation has also been bolstered by new direct flights launched by Etihad at East Midlands and London Stansted. MAGs airports are ready to provide the capacity which will be demanded by freight operators as other airports in the South East fill up over the coming 10-15 years.”
The airport group also released a new Trade Tracker report to show the value of cargo moved through its airports.
The standout figure in the report, according to MAG, was the more than £1bn worth of goods traded with China through East Midlands, Stansted and Manchester during the period.
This moved China from MAG’s ninth to third most important non-EU export market. The most valuable commodity exported to China from the UK is medicine, while the most valuable commodities imported from China are mobile phone components and SD cards.
“The US remains by far the most important global export market for the UK, as it has been for the past twenty years,” MAG said.
“Goods exported to the US through MAG’s airports have almost doubled in value in the last ten years.
“Over the same period, other countries have rapidly grown in importance. The Middle East and Asia now make up four of the top five most important countries for exports.

“Qatar is now the fourth most lucrative export market in the world for goods leaving MAG airports, with £377m worth of goods destined for the gulf state in the first half of 2016.
“The rise of Qatar and China have come at the expense of more traditional trading nations such as Switzerland and Turkey, who were both in the top five in 1996 on the strength of the export of aircraft parts.”

For imports to the UK, the US retained its position as significantly the UK’s most important import market, second place is now taken by China.
Japan, which was second twenty years ago, is no longer in the top five. Switzerland retains its position in the top five by virtue of the value of Swiss watches being imported, although its significance has diminished over the past twenty years.
MAG head of cargo Conan Busby said: “One of the Government’s key priorities should be to help the UK’s thriving air cargo industry fly our goods direct to key overseas markets.
“A filling Heathrow means capacity there is limited – but a rapidly growing number goods are still leaving East Midlands, Stansted and Manchester for Singapore, China and Qatar.
“In addition, Brexit may make trucking goods out of the country to fly from mainland Europe more difficult, so it is important that these facilities are nurtured and helped to compete and thrive.”