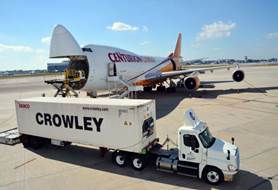 Miami International Airport (MIA) has completed its first-ever ocean-to-air perishables transhipment –  10 tons of peas from Guatemala
The peas arrived aboard the Crowley Maritime Corp. vessel Tucana J at Port Everglades on January 30, were trucked to MIA, and then departed to Amsterdam via a Centurion Cargo flight on February 2.
The service comes after the US Department of Agriculture last year approved a permit for the sea-air service and US Customs and Border Protection (CBP) agreed to expedite processing of the ocean shipments before their air departures.
Miami-based Customized Brokers, a subsidiary of Crowley Maritime Corp, partnered with MIA to win approval for the programme, which was first revealed in October.
The logistics firm can now coordinate ocean shipments of perishable products from Latin America to Port Everglades and then transport them to MIA, where they will depart by air to freighters serving Europe, Asia and the Middle East.
The ocean-to-air pilot program will save both time and money for cargo shippers, who will receive expedited air transport for perishable products without paying CBP duties.
It also allows European and Asian households to receive Latin America produce at the peak of freshness, extending in some cases the seasonality for certain products.
Additionally, the new ocean freight shipments will expand MIA’s overall cargo operations, which continue to handle more perishable imports than all other U.S. airports combined.
The airport also hopes to achieve a Foreign Trade Zone magnet site designation, which upon approval would allow a variety of manufacturers to lease vacant property at MIA and have their tariffs deferred, reduced or eliminated.
It has also launched its Cargo Optimisation, Redevelopment and Expansion (CORE) Programme, which aims to modernise MIA’s existing cargo operation and double its capacity.