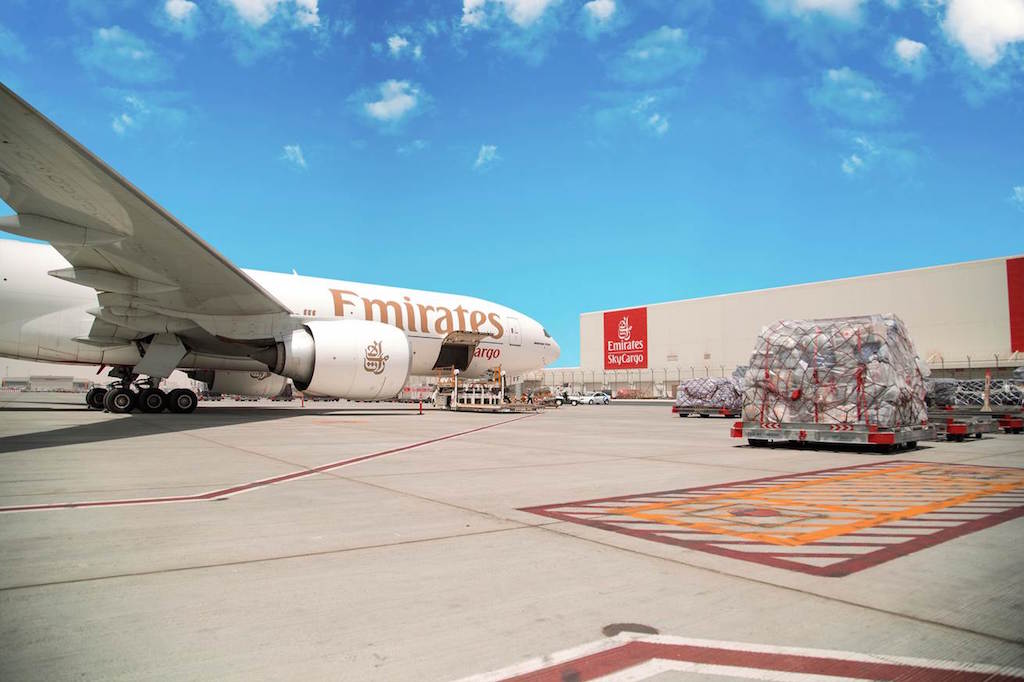 Dubai’s Emirates SkyCargo has officially opened its new airfreight terminal at Al Maktoum International Airport (DWC).
Emirates SkyCentral, a first phase 800,000 tonne capacity cargo terminal that can handle 12 freighters, is located within the Dubai South complex, 77 km from the airline’s passenger aircraft hub at Dubai International Airport (DXB).
A fleet of 47 trucks, 12 of them reefers, transfer freight between the carrier’s Cargo Mega Terminal bellyhold hub at DXB and freighter cargo at Dubai South, the rebranded Dubai World Central which is an emerging 145 sq km city situated within the emirate of Dubai.
The just over one hour truck journey between the two cargo terminals takes place along a “virtual corridor”, a Customs approved bonded route which is closely monitored by hi-tech security, including geo-fencing and GPS tracking. The total transfer time, from aircraft arrival to aircraft departure, takes around five hours.
Emirates – with a fleet of 13 Boeing 777Fs and two B747-400ERFs – is the global number one combination (passenger and freighter) cargo carrier, according to volume statistics issued by IATA.
Nabil Sultan, emirates divisional senior vice president, cargo, said: “The opening of Emirates SkyCentral is an important milestone for us, as it represents our vision for future growth and firmly establishes Emirates SkyCargo as the world’s leading air cargo carrier across all its operational areas.
“The space it currently occupies on the land allocated to us at Dubai South is part of a much bigger area, which we can develop over time to increase our cargo handling capacity to achieve our vision of 12m tonnes annually by 2050, from the current 2.3 m tonnes.”
Emirates SkyCentral was officially inaugurated by Sheikh Ahmed bin Saeed Al Maktoum, chairman and chief executive of Emirates Airline and Group.
Sultan added: “This facility also features the best and latest of what the air cargo industry has to offer, and enables us to give our customers a world class, efficient and seamless service no matter what their requirements. It also further establishes Dubai as a leading global air cargo hub, which has the advantage of a strategic location in the centre of trade between east and west.
“It takes a lot of work to bring a facility such as this to reality, and I want to thank everyone for their support and commitment in making it happen, from the Government of Dubai and its various departments, to the contractors and staff of Emirates SkyCargo.”
Mohsen Ahmed, vice president of logistics at Dubai South, said: “With the launch of the Emirates SkyCargo facility, Dubai South begins an exciting new chapter in its journey towards establishing Dubai’s excellence as a logistics hub.
“Dubai South offers the ideal connection point for sea and air cargo, which calls for rapid movement to the markets of the Middle East, Asia and Africa.”
Emirates SkyCargo, contributing 15% of the airline’s total transport revenue, currently uses cargo hold capacity in Emirates’ fleet of more than 240 aircraft, including the freighters, and provides air cargo services to more than 145 destinations around the world.