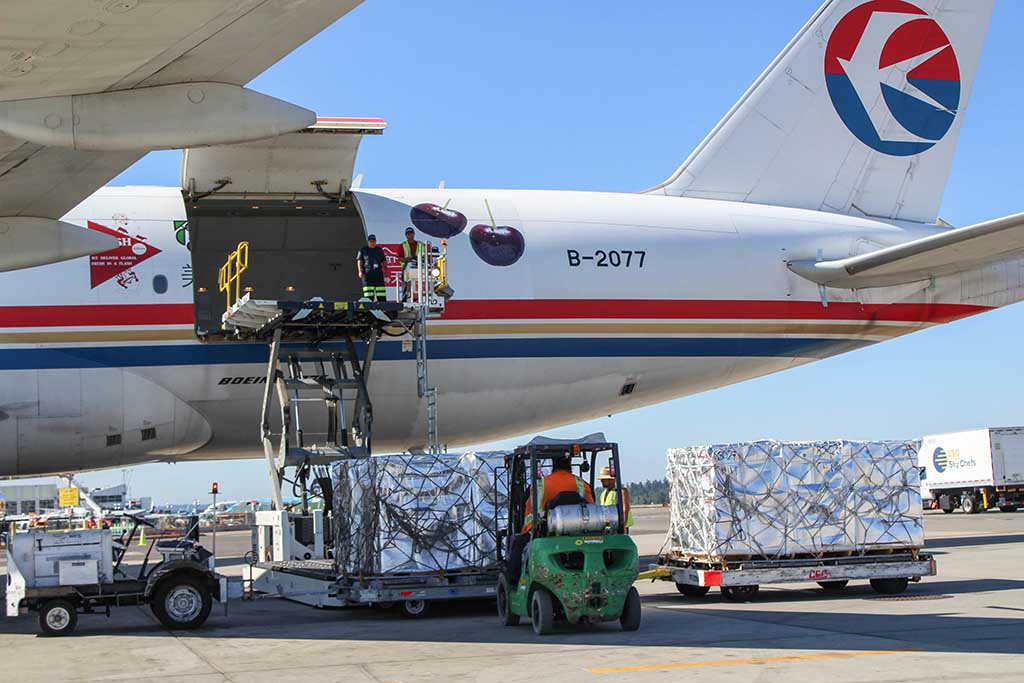 A fruit-themed China Cargo Boeing 777 freighter flew into Seattle-Tacoma International Airport on the US west coast, to harvest a booming US cherry season which is projected to export a record crop.
The specially-painted aircraft, nicknamed the ‘Cherry Express’, is part of a fleet that serving five Pacific Northwest states which have so far this season shipped 18.5m boxes of cherries, each weighing 20lbs (9kg).
In 2016, the total international cherry volume exported through Sea-Tac Airport was 40m lbs (18,000 tonnes), 10m lbs  more than 2015 and with a declared value of more than $115m.
“We’re proud to support Washington farmers by providing facilities for the international freighter airplanes to deliver our state’s world-class cherries to global markets,” said Port of Seattle Commissioner Stephanie Bowman. “This is just one more way the Port of Seattle connects our region to world and provides economic benefits across the state of Washington.”
Exports to Asia in July, primarily cherries, can be five times the amount of tonnage shipped on the most active airline at Sea-Tac. Other Asia airlines usually have volume increases of two to three times their normal monthly tonnage. Approximately 100 tonnes of cherries can be loaded into a 747-400 freighter, one of the most common cargo planes at Sea-Tac. For the Cherry Express, it can hold close to 200,000 lbs.
“Our growers and associated businesses depend on exports and Sea-Tac is a valued partner in our success,” said Northwest Cherry Growers internal operations director Keith Hu.
“About 30% of the Northwest cherry crop was exported in 2016, the vast majority going to Asian countries. Consumers at home and abroad expect fresh and delicious Northwest cherries and we’re expecting 2017 is going to be another banner year.”
Northwest cherry export sales averaged $267m for the past five years. In the past five seasons, the Northwest Cherry industry packed and sold an average of 196,000 tons of fresh sweet cherries, reaching an all-time high of 232,000 tons in 2014.
Read more Cargo Airport News