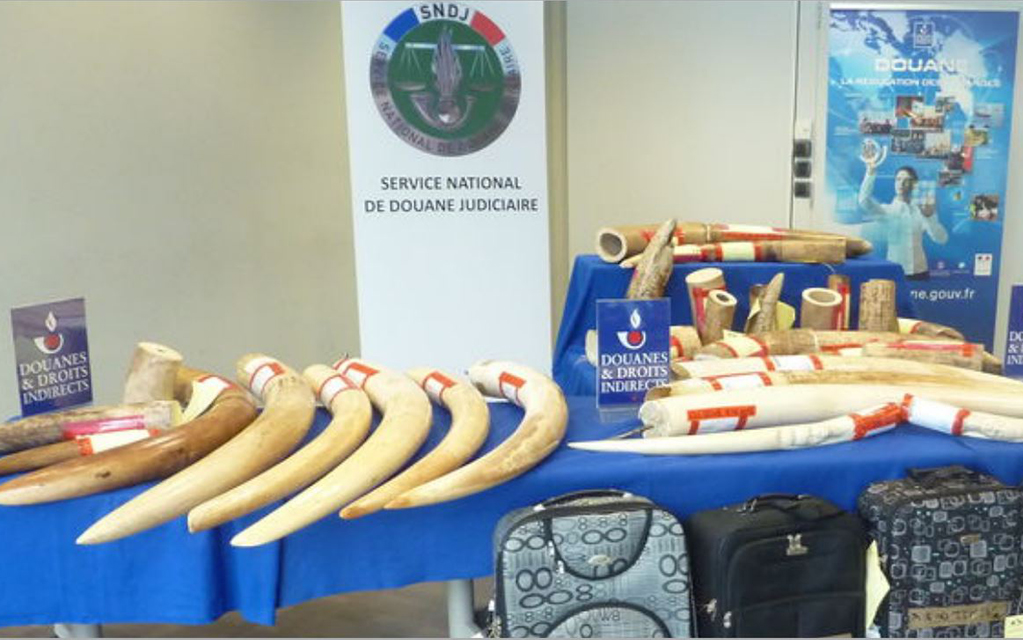 A new analysis of global airport wildlife seizure and trafficking data reveals that criminals are exploiting air transport to smuggle protected and endangered animals and animal products on commercial flights.
The report, “Flying Under the Radar: Wildlife Trafficking in the Air Transport Sector,” analyses airport seizures of ivory, rhino horn, birds and reptiles from January 2009 to August 2016.
Collectively, these four categories account for about 66% of all trafficked wildlife, according to the United Nations Office on Drugs and Crime (UNODC), and serve as indicators for wider trends within illicit wildlife trafficking.
The illegal trade of wildlife is the fourth largest black market in the world—worth in the region of $20bn annually—and impacts more than 7,000 species of animals and plants. Criminal organisations involved in wildlife trafficking are often directly connected to other trafficking networks, including the smuggling of narcotics, arms and people.
The seizure data in the survey indicates that wildlife traffickers moving ivory, rhino horn, reptiles and birds by air tend to rely on large hub airports all over the world.
According to the report, the country with the most reports of wildlife trafficking in the air transport sector was China — largely due to its role in the ivory trade — followed by Thailand and the United Arab Emirates.
The US ranked tenth by number of air seizures. Overall, 114 countries had at least one instance of wildlife trafficking in the air transport sector during the period covered by the report.
Ivory and rhino horn trafficking routes appear fairly concentrated in Africa and Asia, although the products often transit through countries in the Middle East and Europe. Reptile and bird trafficking routes, by contrast, appear geographically diverse, with concentrations in North America, Europe, the Middle East and South Asia.
The study was produced by C4ADS as part of the USAID Reducing Opportunities for Unlawful Transport of Endangered Species (ROUTES) Partnership.
Michelle Owen, the ROUTES Partnership lead, said: “This analysis provides a global perspective on what many in the airline industry are already seeing at the regional level: transport infrastructure is being abused to facilitate the trafficking of wildlife.
“There are a variety of low-cost and high-impact solutions available that airports and airlines can take to help address this issue. ROUTES is developing resources to raise awareness and build capacity within the air transport sector, and to support leaders within the transport industry who have made commitments to assist with tackling wildlife trafficking.”

Flying Under the Radar outlines more than a dozen data-based recommendations for preventing wildlife trafficking through the air transport sector. These include creating awareness among personnel and passengers, training air industry staff, strengthening enforcement seizure protocols and reporting and sharing seizure information.
“Wildlife seizure data is vital to identifying, understanding and combatting wildlife trafficking in airports around the world,” says author Mary Utermohlen from C4ADS.
“Still, it’s important to recognise that seizure data of any kind only provides a partial window into the true nature of trafficking activity. What seizures can’t show are the patterns and routes associated with trafficking activity that is not detected, seized or reported by enforcement authorities.”
Jon Godson, assistant director of environment at IATA, said: “Airlines are rarely informed if there has been a wildlife seizure from a passenger or cargo shipment carried by their aircraft. Data like this can demonstrate not only high risk routes, species and concealment methods but also the truly global nature of this exploitation.”