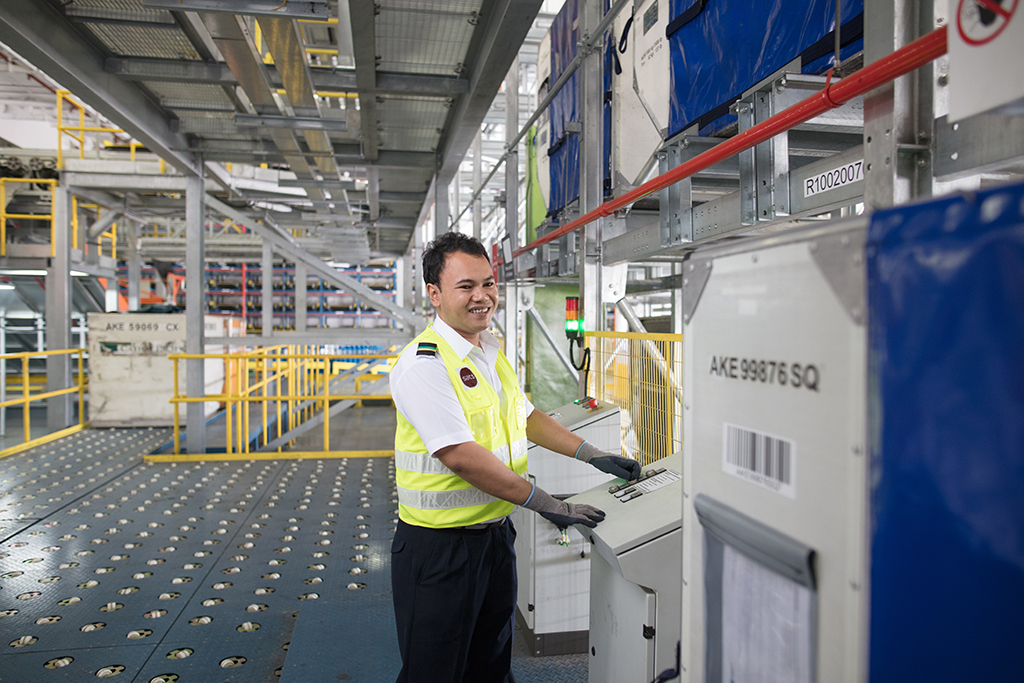 Singapore ground handler SATS has unveiled its new eCommerce AirHub at a Changi airport.
The S$21m, 6,000 sq m facility, co-funded by the Civil Aviation Authority of Singapore (CAAS), will increase Changi’s mail sorting capability to support the growing e-commerce market.
A spokesperson for the handler said: “By deploying state-of-the-art technology, SATS has multiplied mailbag processing capacity by more than three times and streamlined the mail sortation process to deliver quicker turnaround for international e-commerce mail.
“Processing time is now reduced by 50%. At the same time, automation has provided opportunity for employee upskilling. SATS is currently the only ground handler in the region to operate such an automated airside facility.”
Alex Hungate, president and chief executive of SATS, said: “E-commerce is expected to continue on its growth trajectory in the region and beyond with continued strong consumer demand. The SATS eCommerce AirHub enhances the competitiveness of the whole airfreight industry in Singapore by offering greater speed and transparency, as well as higher capacity to handle future growth.”
Kevin Shum, director-general of CAAS, said: “CAAS is pleased to support the establishment of the eCommerce AirHub under the Aviation Development Fund.
"We are delighted that this initiative has enabled SATS staff to benefit from an enlarged job scope, higher pay, and a more comfortable and conducive workplace. Such collaborations are part of our efforts to transform Singapore Aviation, make the sector more efficient and competitive, create better jobs and improve productivity using technology.”
Innovations at the hub include a fully automated mail sortation system that increases the mailbag processing capacity of SATS to more than 1,800 an hour – up from 500 previously.
Additionally, due to interface integration with SingPost’s airmail consignment operations and the facility’s locality within the free trade zone on the airside, the mail sortation operation is streamlined to eliminate the need for mailbags to be transported to and from the hub.
Added the spokesperson: “The combination of these factors has enabled faster mailbag processing that reduces turnaround time by 50% – from six hours to three – thus allowing international e-commerce mail to connect to an earlier flight for faster delivery.
Traceability is also improved at the SATS eCommerce AirHub, as customers, such as SingPost, can now better track and trace their mail via the data interface, for example checking connection status by confirming arrival and departure times.
Woo Keng Leong, chief executive, postal services, SingPost, said: “The improved efficiency and tracking from our collaboration with SATS will enhance SingPost’s international mail operations amid Singapore’s growing importance as an e-commerce logistics hub.”
As well as improving service, SATS eCommerce AirHub will also be more productive: airmail consignment operations are targeted to be at least 30% more efficient with full automation.