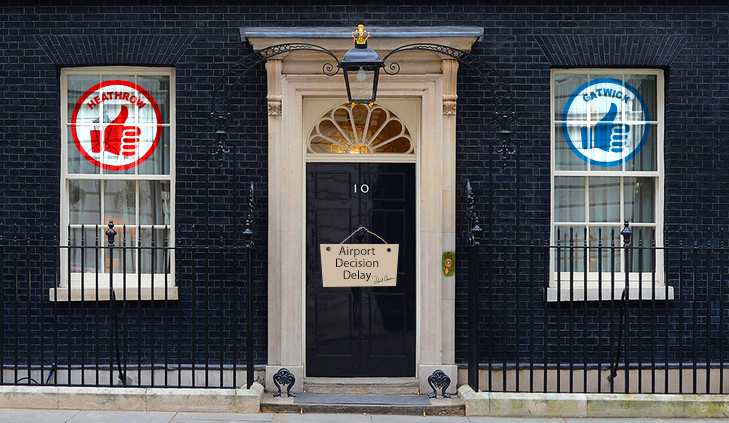 A decision on airport expansion in south-eastern England is to be delayed until "at least October", Transport Secretary Patrick McLoughlin has announced.
London’s Heathrow and Gatwick airports have been vying with each other over building an extra runway and a decision was expected this summer.
Heathrow’s plan for a third runway received the backing of the independent Airports Commission in 2015 following a two-and-a-half year, £20m study. The Commission also set out conditions to expansion including restrictions on night flights, controls on air pollution and noise.  Heathrow accepted and, in most cases, exceeded those conditions in June.
McLoughlin’s announcement is not a surprise, as UK politicians are now concentrating on a leadership campaign and renegotiating an exit deal with European Union.
David Cameron’s decision to resign from the post of Prime Minister and leader of the Conservative Party had also raised the possibility of a politician that is against expansion at Heathrow becoming leader.
One front runner for the role of Prime minister was Boris Johnson, who had campaigned vigorously against an extra runway at the west London airport. However, in a surprise move, Johnson today ruled himself out of the leadership campaign.
Responding to the announcement that a decision on Heathrow expansion will be handed to the Prime Minister’s successor, John Holland-Kaye, the airport’s chief executive, said that a third runway must be a part of the Government’s Brexit plan.
Holland-Kaye said: “If Britain wants to be confident, outward-looking and at the centre of the world’s economy then expanding Heathrow must be a key building block in the Government’s Brexit plan.
“It will allow British exporters to trade with all the growing markets of the world, strengthening Britain’s position as one of the great trading nations.  And at a time of uncertainty a £16bn privately funded infrastructure investment will create jobs and growth across the UK.
“Government can send the strongest possible signal that Britain is open for business and confident in its future by expanding Heathrow.”
Responding to the announcement from the Transport Secretary, Stewart Wingate, Gatwick chief executive, said: “The need for Britain to expand aviation capacity has never been greater. At an uncertain time Britain needs to show it can be agile and decisive. We must move on and show the world that we are open for business.
"Gatwick is already the most connected airport in the UK, offering Britain connections to all five continents, to developed and emerging markets alike. It is now clear that only Gatwick can deliver the expansion we need and do so by 2025.  We can help improve our international competitive position by offering the fastest possible improvement to our trading links at a time when it is most necessary.
‘There is nothing in our way. The time for debate is now over and the time has come for Britain to get on with it. We can privately finance the project. We can offer a fair deal for those most impacted and we can support growth across all regions of the country. We can deliver the runway that Britain needs."
A spokesman for MAG, the owners of Manchester, London Stansted, East Midlands and Bournemouth airports, said: "Today’s delay again highlights why Government must give priority to accelerating measures to make best use of the runway capacity this country already has, such as improving rail links to Stansted and encouraging new long haul connectivity across the country.

"With no resolution in sight, now is also the time for Government to step back from the decision on runway capacity and let the market decide where and when new capacity should be delivered. Competition will always provide the best outcome for passengers and airlines."