Air cargo demand continued to improve in November, while load factors remain high due to the loss of bellyhold capacity, according to the latest statistics from IATA.

The airline association’s data shows that during the peak season month, air cargo tonne kms declined by 6.6% compared with a year earlier. Over the first 11 months demand is down by 11.6%.

Capacity was down by 20% against a year earlier, which is nearly three times larger than the contraction in demand.

“The capacity crunch is caused by a 53% decrease in in belly capacity,” IATA said. “This has only been partially offset by a 20% increase in freighter capacity.”

As a result of supply declining at a higher rate than demand, the average cargo load factor reached 58.2%, which is 8.4 percentage points higher than a year ago.

“The new export orders component of the manufacturing Purchasing Managers’ Index (PMI) remained in growth territory in both developed and emerging markets for the third month in a row after two years of indicating negative growth,” IATA said. “Retail sales for November were up by around 5% over 2019 for both China and the US, propelled by events like Black Friday and Singles’ Day.”

However, the airline association suggested that that limited capacity could put pressure on the market as demand ramps up in line with the roll out of Covid-19 vaccination programmes around the world.

“Severe capacity constraints persist as large parts of the passenger fleet remain grounded. This will put pressure on the industry as it gears up to deliver vital Covid-19 vaccines.

Looking at regional performance, Asia Pacific-based airlines reported a decline in year-on-year demand of 10.6% in November while over the first 11 months of the year demand is 16.1% down.

“While international traffic within the region remains weak, exports on the Asia-North America and Asia-Europe routes are strong, driven by demand for e-commerce and PPE,” IATA said.

“International capacity remained constrained in the region, down 25.3%. However, this was an improvement over the 28.5% fall the previous month.”

North America-based carriers posted a 5% increase in demand in November compared to the previous year.

IATA said the stronger performance compared to the rest of the industry was driven by a less stringent capacity crunch compared to other regions and strong traffic on the Asia-North America routes, reflecting rising e-commerce demand for products manufactured in Asia.

Europe-based carriers reported a decrease in demand of 13.4%.

IATA said the demand had been affected by the resurgence of the Covid-19 virus and the impact of lockdowns on consumer demand and business activity.

It added that a lack of capacity remained a challenge for airlines in the region.

Airlines from the Middle East region reported a decline of 2.3% in November as the lack of international connectivity affected performance.

Latin America-based carriers reported a decline of 19.2% as this region was also affected by the resurgence of the Covid-19 virus.

“This is primarily driven by a soft performance on the Asia-Africa route, which was down 4.5% year on year,” IATA said.

Yesterday, data provider CLIVE released stats showing that in the last week of December air cargo demand returned to growth for the first time in 12 months. 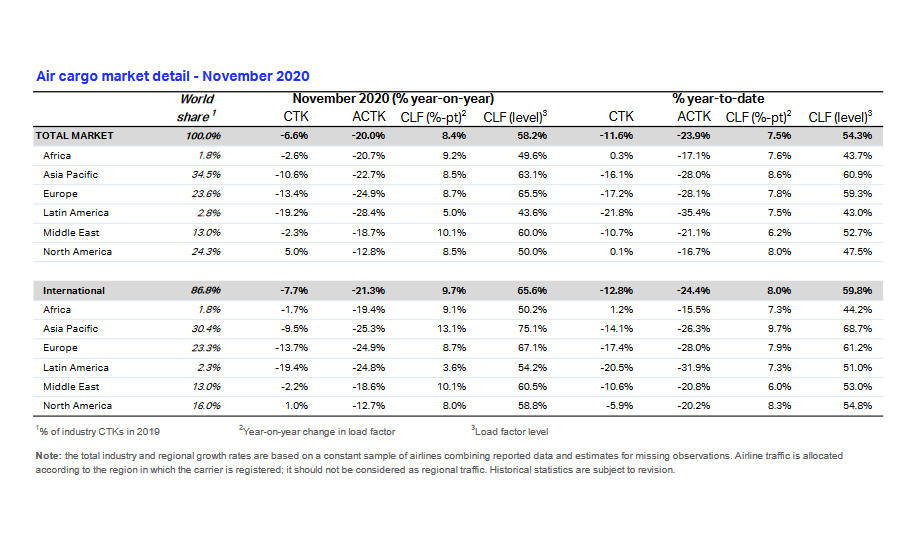