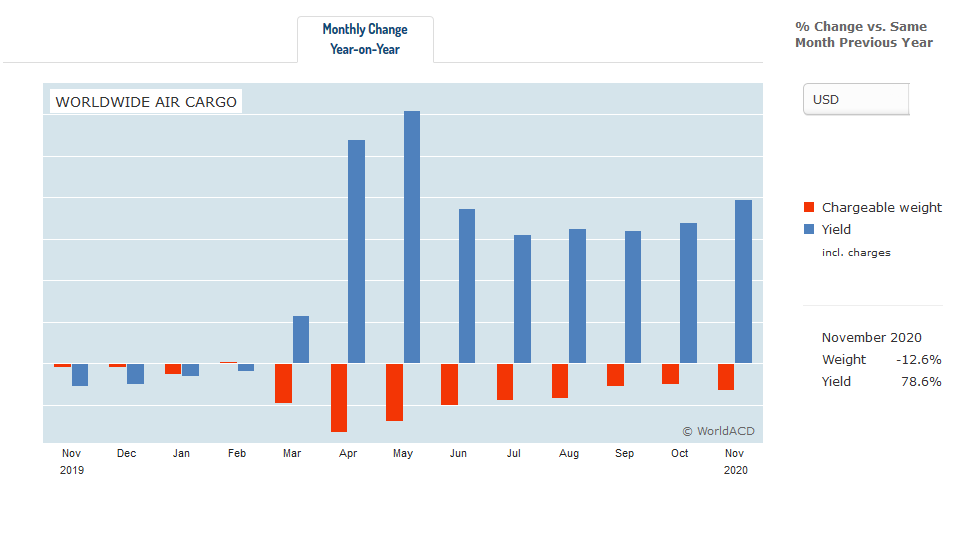 Air cargo’s gradual demand recovery slowed in November, but there were signs that volumes were picking up again in December, according to data provider WorldACD.

The company’s data for the month of November shows that in “a year like no other” volumes declined by 12.6% year on year but rates experienced their “strongest increase” since the “crazy months” of April and May.

The demand decrease lags behind performance in October, with volumes down by 2%. Despite this, rates were on the up.

WorldACD added that overall capacity went up by 1% from October to November, with freighter capacity decreasing by 1% and cargo capacity on passenger aircraft increasing by 3%.

“Asia Pacific was the only origin region growing its air cargo business between October and November (by 3.2%),” the data provider said. “Not surprisingly, given the large orders of PPE-goods, shipments above 5,000 kgs grew year on year, whilst all smaller weight breaks lost between 16% and 29% year on year.”

It added: “Calling the air cargo market hot, would probably be the understatement of the year. The usual trends from the pre-Covid days seem to have become just faint memories.”

Looking at preliminary figures for the first half of December; worldwide volume was 2% higher compared with the first half of November, showing a better month-on-month trend than the trend from October to November.

“Origin regions with the highest volume increase were Africa (+21%) and Central & South America (+8%),” WorldACD said. “Load factors show a consistent, though small, increase since the beginning of November. Worldwide average yields/rates (per kg) reached a level of $3.32 in the second week of December, two cents above the November-average.”