Air cargo demand continued to increase in February but regional performance varies greatly, according to the latest statistics from data provider WorldACD.

Figures for February show that demand in weight during the month increased by 1.1% year on year (YoY). Over the first two months of the year, which helps offset the impact of a later Chinese New Year on comparisons, there was a 0.9% increase.

Rates for the month of February were up by 84% compared with a year ago, while over the first two months yields are up 79%.

While this is broadly a good sign for the industry, WorldACD cautioned: “Worldwide, the trend may be positive, but in many markets, the reality is different.”

In its monthly round-up report, the company said: “Asia Pacific, one of the six main regions charted by WorldACD, is in a class of its own, emphasising the increasing importance of the region in world trade.

However, WorldACD said that for the other 19 sub-regions, the picture is “drastically different”.

“Apart from 3 small sub-regions (central Africa, Mexico and central Asia), all sub-regions showed a decrease in outgoing business in 2021 compared to each of the three foregoing years. Hardest hit are South Asia, with a decrease of around 24% vs each of the three earlier years, North Africa (-23% YoY), Southern Africa (-20% YoY), the Gulf Area (-17% YoY) and Canada (-16% YoY).

“Of the larger 15 city-to-city markets growing by more than 100% YoY in Jan/Feb, only two had Shanghai as their origin, and one Hong Kong.  The 12 other markets had diverse origin cities, including Paris, Liege, Nairobi, Beirut, Los Angeles and New York. The highest MoM growth was recorded in the market from Japan to US Midwest, in kilograms, but also in yields/rates.”

Looking at cargo types, WorldACD said that general cargo continued to outperform special cargo in terms of yield growth in percentage terms against a year ago.

When it comes to volume growth, vulnerable and high tech demand outpaced the market. Pharma/temperature controlled volumes decreased compared with a year ago.

“The highest rates in air cargo at the moment are paid for business originating in South Korea, both eastbound and westbound: demand for COVID-19 diagnostic kits and a sea/air transfer play an important role here,” WorldACD said. 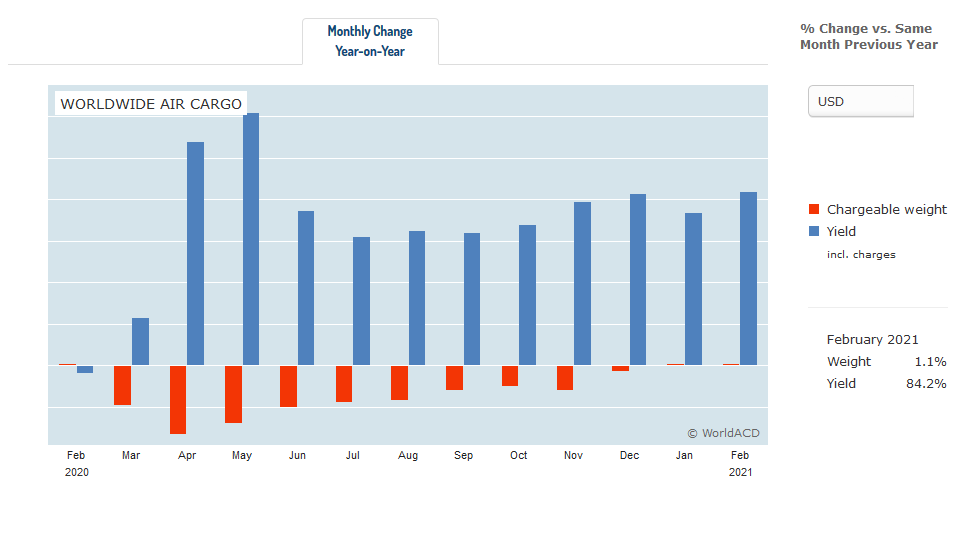