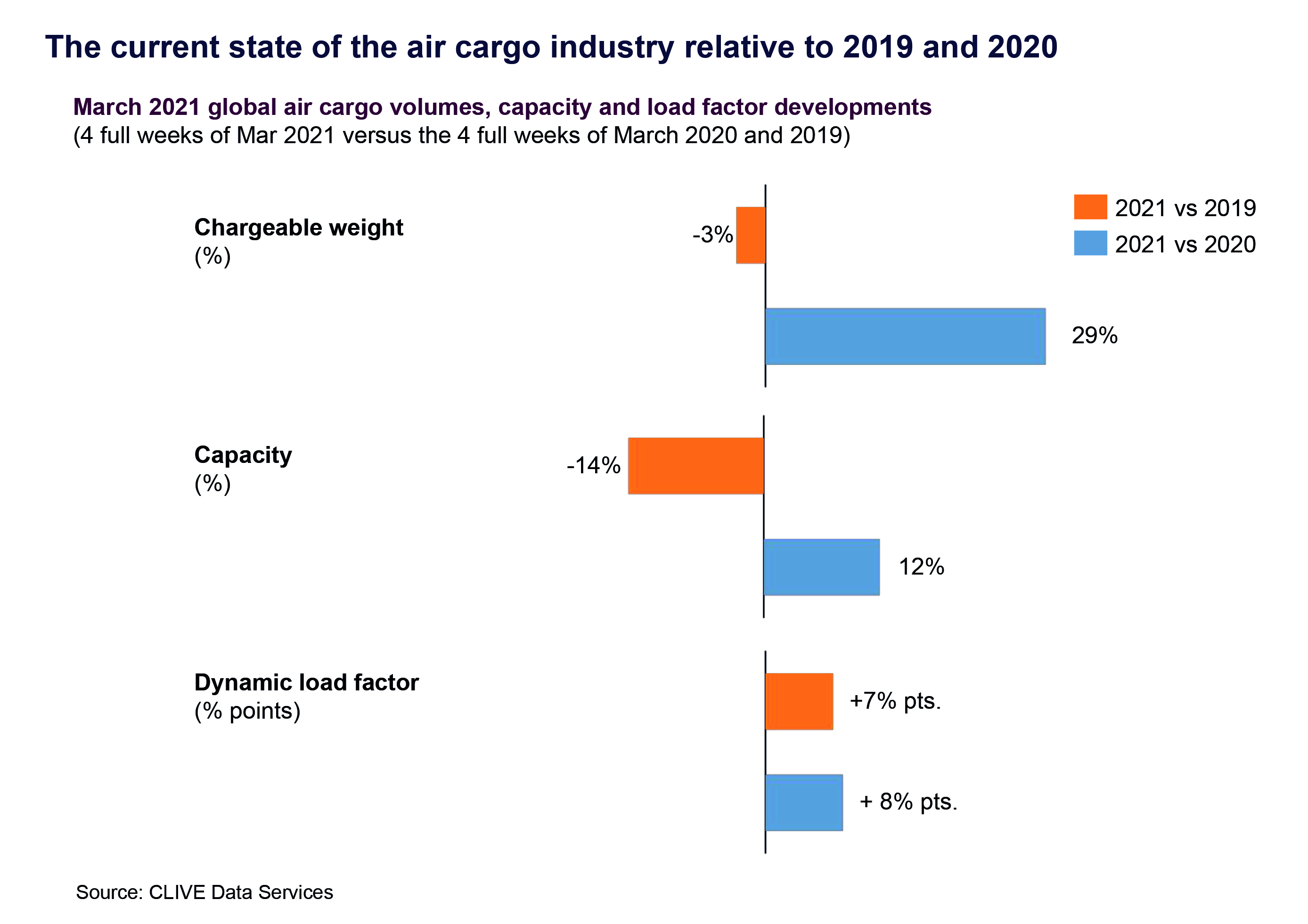 The recovery in air cargo demand appears to have stalled in March, according to the latest statistics from CLIVE Data Services.

Figures from the data provider show that volumes in March declined by 3% compared with March 2019 (pre-Covid), while in February demand was down 1% on two years earlier.

The early effects of the pandemic can be seen when comparing March’s demand figures with last year, where they are up by 29%.

“The -3% trend in demand for these weeks also worsened towards the end of the month, reaching -4% relative to the start of the month,” CLIVE said.

While demand struggles to keep up with 2019 levels, overall indicators continue to point towards a seller’s market due to lost belly capacity.

Airline capacity for the month was down by 14% compared with 2019 levels, although it was up 12% on a year ago.

Niall van de Wouw, managing director of CLIVE Data Services, said: “March data shows us the market is still very supply driven. After indicators that the global air cargo market was seeing some ‘light at the end of the tunnel’ in January and February after a year of such high disruption, this latest industry data will reign in that optimism slightly.

“This may reflect Covid-19 fatigue in the buying habits of businesses and consumers as we see more reports of infection rates creeping up again in many countries, fears of a possible third wave of the virus, more lockdowns and curfews, and concerns over both the supply and effectiveness of vaccines.

“Flights are very full from a cargo point of view, but with no recovery in the passenger market, airline intercontinental operations are still mainly cargo-driven and they need higher prices to make these operations financially viable.”

CLIVE highlighted the transatlantic as one trade lane where space is particularly tight. The trade registered record load factors in both directions, reaching 90% westbound for the last two weeks of March.

On eastbound sectors, for example, the Chicago (ORD) to western Europe route reached levels of 80% earlier in the month, the tipping point at which prices often increase exponentially.

“On this market, they went up by around 25% during this timeframe, even though the loadfactor increased by ‘just’ five percentage points.

“And the prices came down just as fast again when the loadfactor dropped below this tipping point,” CLIVE stated.

The China-Europe trade appeared to mirror global trends: volumes in the second week of March were 7% higher than in 2019, but then dropped to 6% and 4% in the following weeks.

“But data shows westbound flights from China still filled to the brim with a ‘dynamic loadfactor’ for the month of 93%.”

“Pricing in March and February did not show big volatility month-over-month and, also, the intra-month volatility was not as big as in previous periods. Whether this can now be viewed as a relatively stable situation on a much higher level than in 2019 remains to be seen,” stated Robert Frei, business development director at Tac Index.