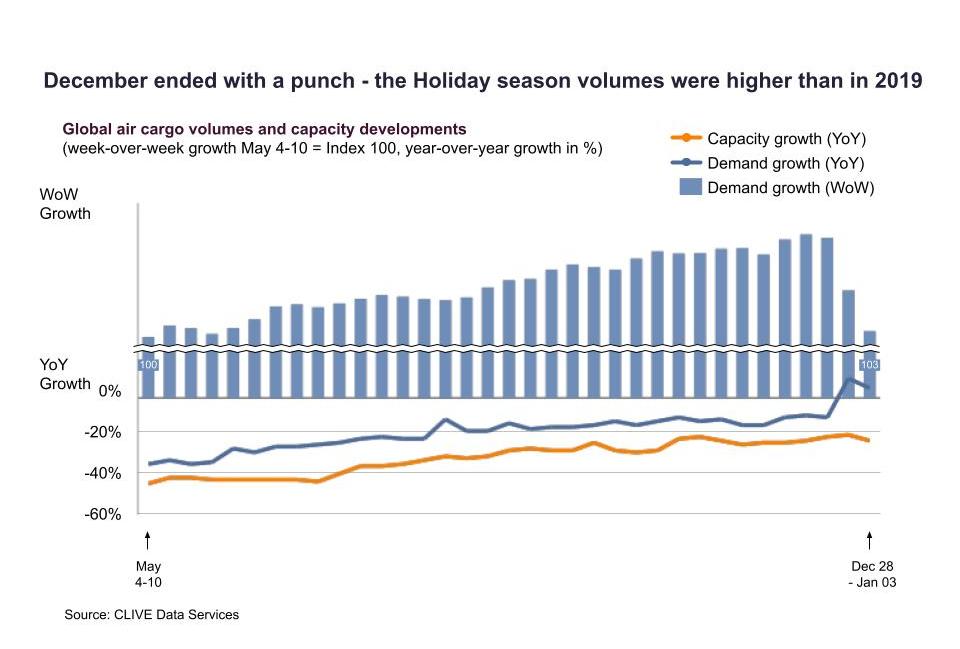 The air cargo industry ended 2020 on a positive note with weekly volumes growing for the first time in more than a year, according to CLIVE Data Services.

The latest figures from CLIVE show that for the week ending on January 3, air cargo demand increased by 8% compared with a year earlier. Meanwhile the ‘dynamic’ air cargo load factor reached a record high of 73% in mid-December.

For the last week of the year, the dynamic load factor stood at 65% — a 13 percentage point improvement on the same time last year.

The data provider said that for the overall month of December, demand was down 5% year on year, but there was a continued closing of the gap from the low of April when volumes were 37% behind a year earlier.

Volumes were also up 2.5% on November, while the dynamic load factor for the month stood at 71%.

“December’s performance was surprisingly strong compared to the flattish level recorded in November and, in the second half of the month, volumes didn’t fall as much as we’d typically anticipate for this normally quieter time of year,.

“To outside observers looking at 2020, increasing airline revenues, at a time of decreasing volumes, may seem a contradiction.

“But it is logical considering the rise in the dynamic loadfactor, where demand and supply come together.”

Airfreight rates held up in December and, in some cases, increased over November even after the hoped-for peak season failed to materialise and there was no immediate sign of any major impact from shipments of Covid vaccine, said Robert Frei, business development director at Tac Index.

“Pricing from Asia to the US is still the highest, followed by Asia to Europe and, lastly, the Transatlantic, with the highest prices reached in week 51,” he added.