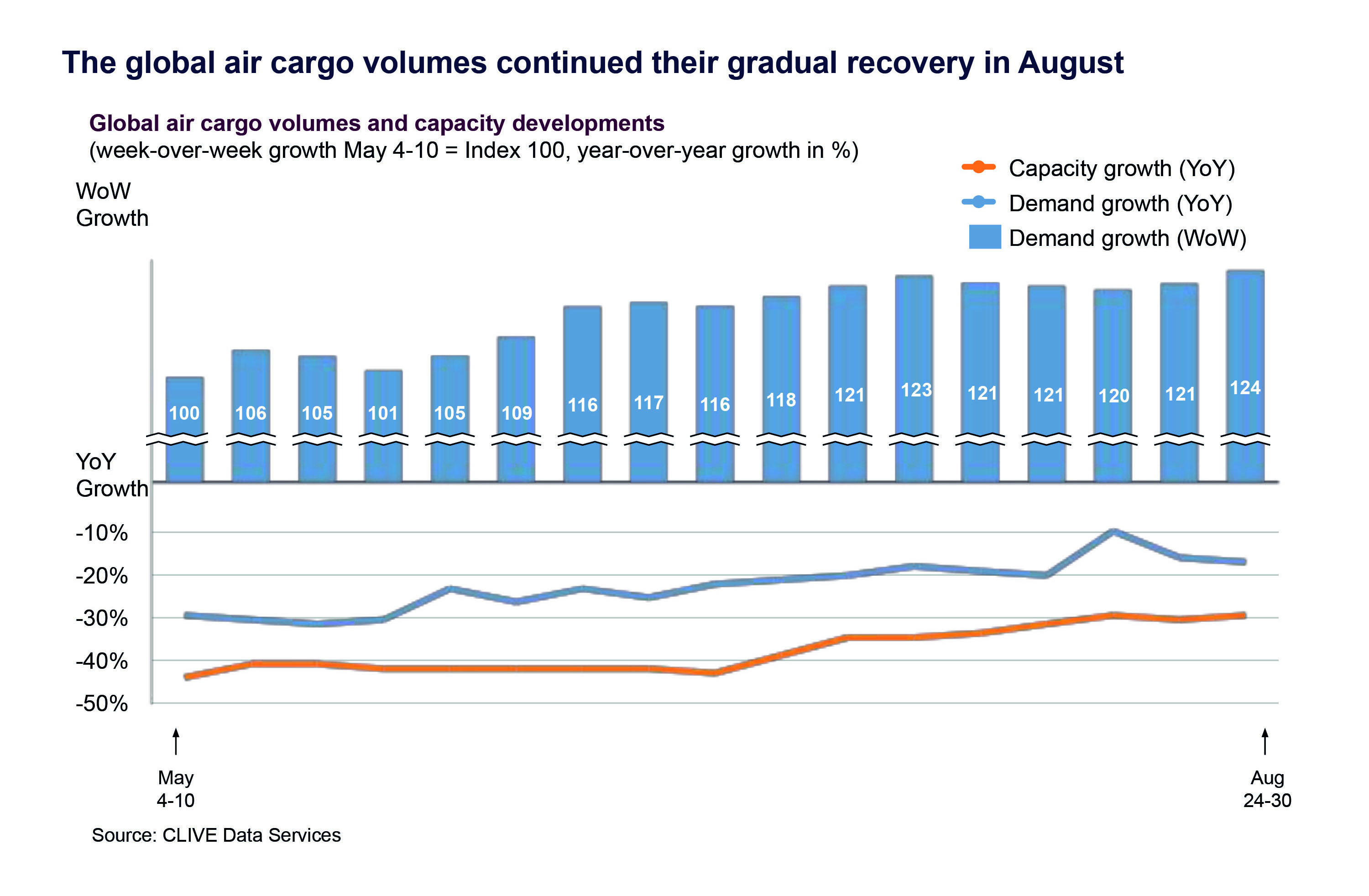 The airfreight market has showed signs of improvement for the fourth consecutive month, CLIVE Data Services’ and TAC Index’s latest data has shown.

“Year-on-year growth during August showed a further narrowing of the gap in international air cargo volumes to -17% versus August 2019,” the analysts said.

By comparison, there was a 41% year-on-year disparity between April this year and last year.

However, CLIVE noted: “This is exceptionally high considering that August is traditionally air cargo’s ‘slack season’ — registering at 8 percentage points higher than the corresponding performance in August 2019”.

Volumes in the last week of August were 4% less than the same week in 2019, which CLIVE managing director Niall van de Wouw said was “not great, but by no means a disaster”.

He added: “Our August data shows the year-over-year decline in volumes is decreasing. The capacity crunch is still there but is becoming slightly less and, as a result, load factors and yields are going down and becoming closer to pre-Covid levels, even though they are still elevated.

“Airline cargo departments have never been in control of their own destiny, and they’re still not, but they are in control of the present and short-term in deciding where to place their cargo capacity.

“Whereas cargo has often been regarded as the ‘freeloader’ of the airline industry because it has always been a by-product of far greater passenger revenues, right now it is passengers who are the ‘freeloaders’ because cargo is the main source of revenue for many airlines and helping to get passenger flights back into the air.

“The massive uncertainty is when will passenger demand return and reverse the tables? The huge idle fleet of passenger aircraft needs to start flying again but no one is expecting that to happen soon in terms of great quantities of capacity. In the meantime, air cargo will continue to have its day in the sun and combination carriers will have to hope this can sustain their slimmed down operations until passenger confidence and bookings return.”

Robert Frei, business development director at TAC Index, added: “When looking at the general pricing trends, we see the reaction to supply and demand happening more swiftly. This obviously has also to do with most carriers and forwarders breaking their contracts during the crisis and the fact that procurement is now done on a shorter-term basis.

“With shippers also finding forecasting even more difficult during the present conditions, this situation may continue for some time. All parties are currently looking at new ways of negotiating contracts, possibly using Index Linked Agreements (ILA) or new risk management tools outside of the physical market. Such instruments are well-known and successfully practiced in other industries but are new to the air cargo market.

“Airfreight has for many carriers and forwarders been the main source of revenue over the last couple of months, which also shows in their results. The importance of air cargo to the recovery of global trade has become very visible and recognised.”