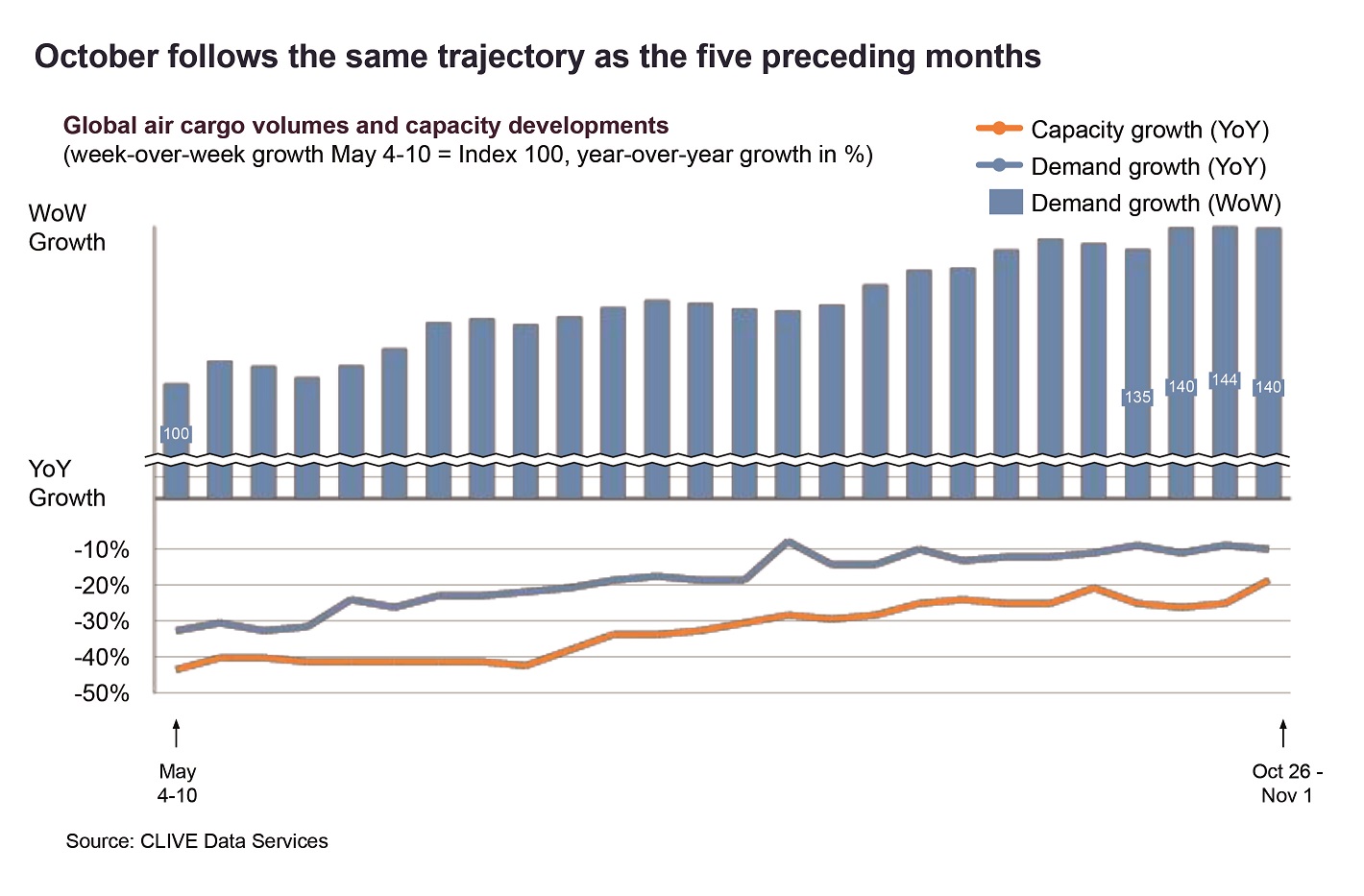 Air cargo demand continued to improve in October but a drop off in volumes towards the end of the month has raised some questions about the strength of the peak season.

The latest figures from CLIVE Data Services show air cargo volumes for the month were 3% higher than September. October demand was down by 13% year on year compared with a low of 37% at the start of the second quarter.

Dynamic load factors ended the month at 70% – at one point reaching a record high of 72% – on par with a month earlier.

However, there was a 3% drop in demand in the last week of the month.

CLIVE Data Services said the industry will be waiting cautiously to see if the sudden fall in demand in the last week of the month signals a new hiatus in consumer spending amidst uncertainties caused by the second wave of coronavirus.

“We recorded a record load factor two weeks ago of 72%, so when we updated the system yesterday evening, we were thinking it could go even higher, but it turned out to be 70%,” he said.

“We see declines across the globe, but ex-China to Europe recorded an above average decline.”

Forwarder contacts had suggested that clients had been cancelling shipments in response to lockdowns being put in place in Europe as the continent contends with a second wave of the coronavirus.

Last month, the data provider had warned of “toxic” market conditions for shippers and despite the decline van de Wouw said this was still the case.

“Load factors are still very high and the uncertainty will remain,” he said. “The market will go from red hot to very hot. If you look at those load factors I wouldn’t say it is now a buyers market.”

Carriers are also in a better position to adjust cargo capacity to meet demand, something that was not as easy to do in the past.

“What we see is that the cargo carriers are in control of their present at the moment,” van de Wouw said. “Previously 50% of their supply side was controlled by passenger services over which they had no influence. That 50% has gone.

“The demand-supply is a lot more efficiently balanced now and will be going forward as long as those passenger planes aren’t there. So even if the demand should drop, I would expect the load factor to remain relatively high because [airlines] will just fly less.”

Westbound capacity from China reflected this with a double-digit reduction in the last week of October, meaning capacity remained tight from China to Europe and, despite a 5% fall in volumes, prices remained elevated, added Robert Frei, business development director at Tac Index.

“Airfreight prices for China/Hong Kong-EU increased 9% week-over-week in the last week of October and were 25% higher than in the final week of September. In absolute terms, rate levels were 60% up compared to the previous 2020 high in May. This is also true for China/Hong Kong-US traffic, where rates for the last week of October were up 28% over the same seven days of the previous month. Clearly, the industry will be monitoring the demand cycle very closely as we potentially enter into another period of uncertainty,” he said.

“However, there will also be some companies looking over their shoulders at the 3% drop in demand in the last week of the month and wondering if the uncertainties caused by the second wave of the virus are about to stop that recovery in its tracks. We will know more once we see the November numbers but the 1.5% drop in the dynamic load factor in the usually strong last week of the month is unusual and raises question marks over demand in the coming weeks.

“While the dynamic load factor and airfreight rates for the month were higher, this was less built upon demand and more upon low supply with the -26% annual decline in capacity. Perhaps this final week of October indicates that the peak might not be as strong as the industry had envisaged and hoped for.” 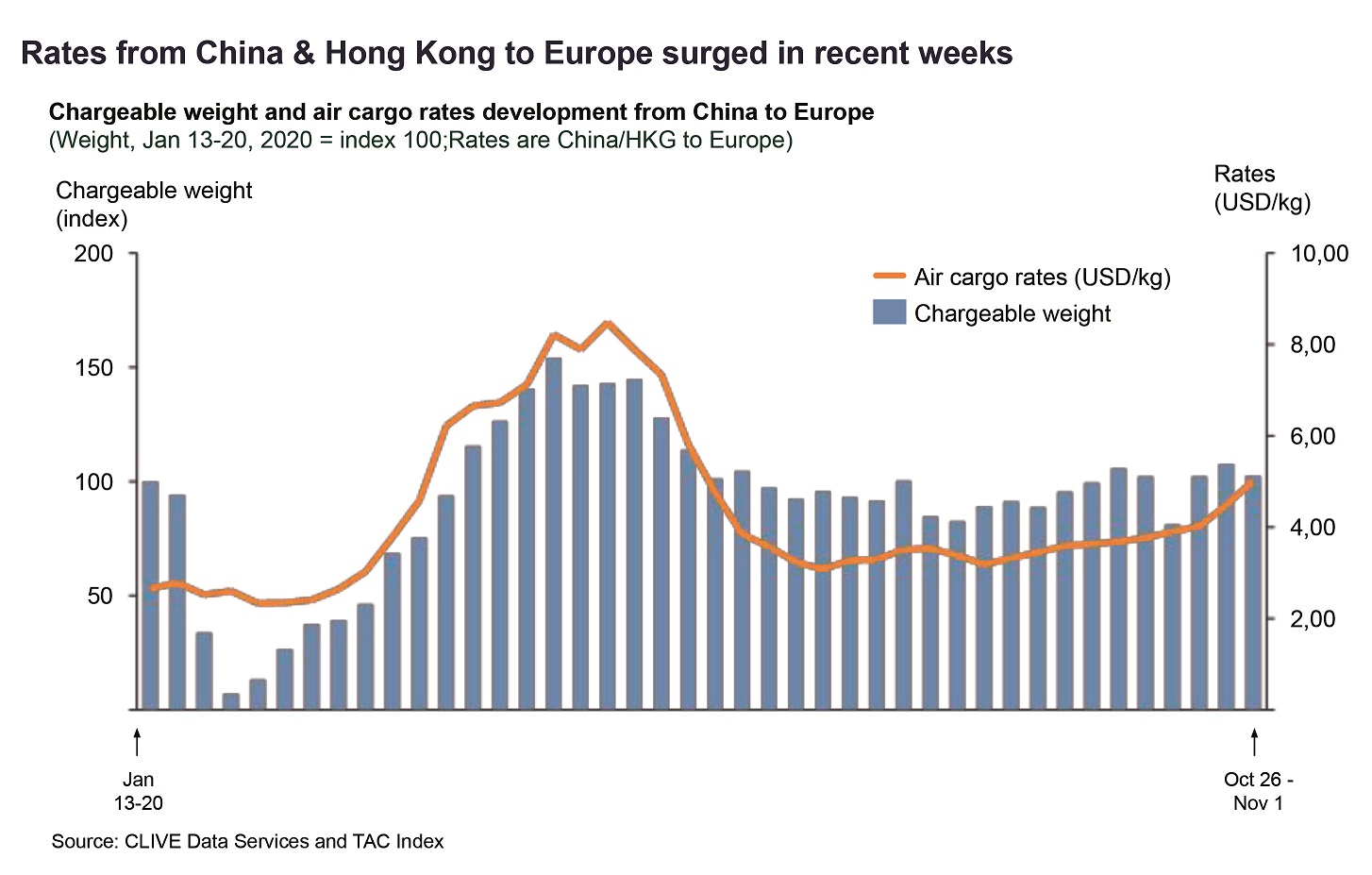