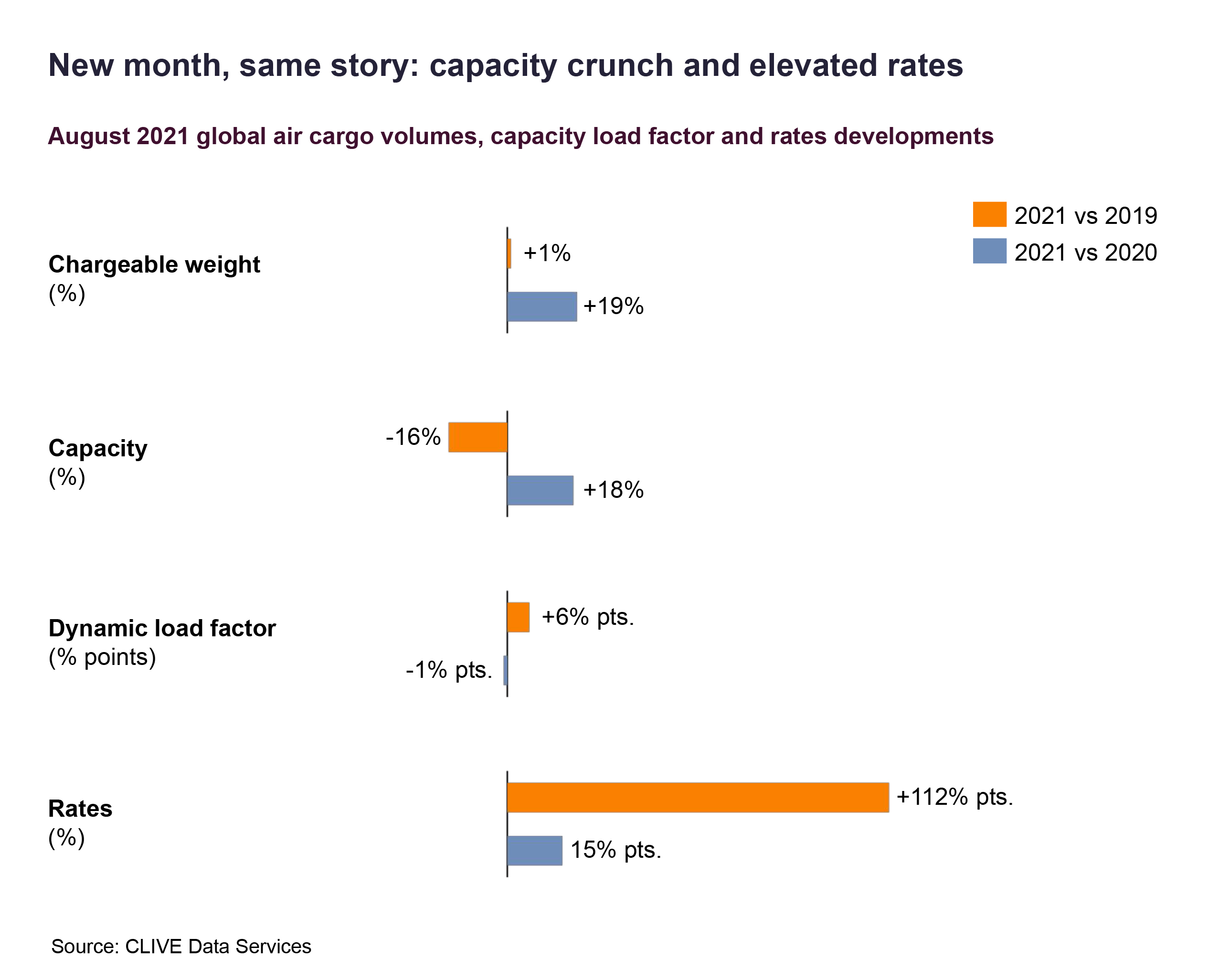 Airfreight rates continued to climb past pre-Covid levels in August, as a strict local lockdown in Vietnam and the closure of cargo terminals at Shanghai Pudong International Airport highlighted the “fragility” of supply chains.

In its latest airfreight market analysis, CLIVE Data Services said the “resilient” international demand for air cargo capacity in August, versus a shortfall in supply, pushed average global air cargo rates up 112% on their pre-Covid levels.

Meanwhile, capacity in August this year was 16% below the level seen in August 2019.

Rising demand is also being driven by the number of retailers having to pivot from traditional ocean freight-based supply chains to air cargo to replenish stock levels in time for their peak sales season, van de Wouw said.

CLIVE’s latest analyses show that the impact on ground operations in Shanghai, contributed to a 10% drop in volumes from China to Europe in the last two weeks of August, while westbound capacity was reduced by 18%. As a result, spot rates increased by nearly 20% in the last week of August compared with the last week of July.

Van de Wouw commented: “The problem for the air cargo industry is not demand, it’s clearly capacity. The market is solid from a demand viewpoint, but it is currently based on a scarce and fragile infrastructure. As we saw in August, a small handful of Covid cases at Pudong airport led to the closure of air cargo terminal operations. When something like this happens at what is the world’s third largest cargo airport, it only reflects how fragile things are for global supply chains and the immediate impact on rates which were already high.

“Shippers want to see more cargo capacity from the return on airline passenger operations, but some signals suggest this may get pushed back again on intercontinental routes following the recent EU recommendation to pause on all non-essential travel from the US to Europe. For passenger airlines operating cargo-only flights, it’s all about the margin per flight and not about adding capacity to grab market share. Airlines want and need passengers back and I suspect airline cargo departments are anxious to see this too because of the pressure they are under to generate revenue – but even when cargo revenues double, if passenger revenues are down 80%, it’s not a sustainability situation for passenger airlines,” he added.