Freight traffic at European airports up 2.8% in May European airports continued to see improvements in freight traffic in May, but demand improvements did slow from the April level.
Airports Council International (ACI) Europe figures show that airfreight demand at European airports increased by 2.8% year on year in May.
This compares with the April increase of 5.5% as the region benefited from an extra weekend and an earlier Easter during the month.
Of the region’s busiest airports, the strongest increase in cargo demand came at Rome, up 16.2%, London Gatwick, up 12.8% and Paris CDG, which reported an 11.5% increase.
Frankfurt, Europe’s largest cargo airport, recorded a 1.7% decline in demand to 167,513 tonnes.
Elsewhere, Istanbul Ataturk registered a 9.2% decline as the political situation and terror attacks continued to take their toll.
The association also warned of the possible impact of the Brexit vote to business.
ACI Europe director general Olivier Jankovec said: “The recent Brexit vote is mainly about medium to long-term risks concerning the integrity of the European single aviation market.
“We do not expect it to have a significant impact on overall European air traffic levels this summer.
“However, the political instability and uncertainty it has created in the UK and beyond, is already hurting business confidence and might end up doing the same for consumer confidence – this could affect demand for air transport later in the year." 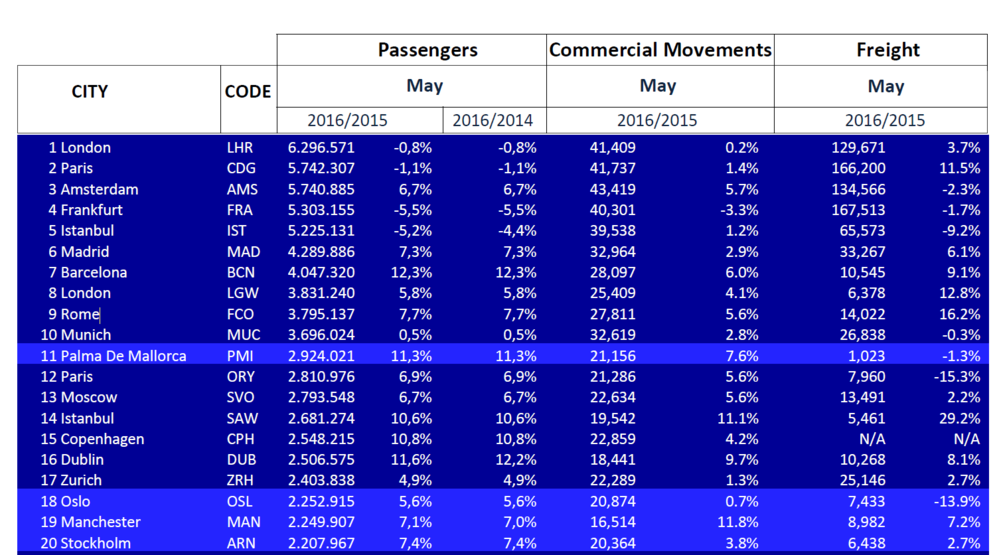