IATA: Volume decline continues, but expected to level off 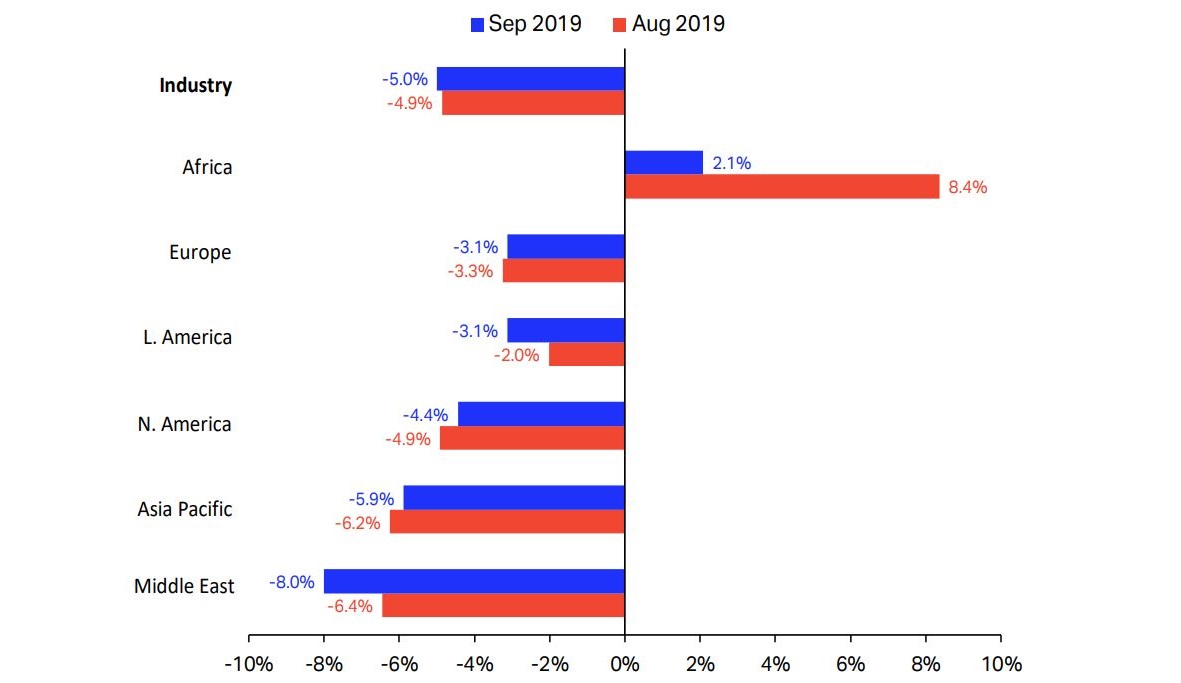 Industry-wide, volumes declined by 4.5% in September year on year. This recent slide, which follows a 3.9% decrease in volumes in August, marks the eleventh consecutive month of decline in airfreight volumes. Africa is the only region to report an increase in freight volumes.

According to IATA’s figures for September, international freight volumes carried by Africa-based airlines increased by 2.2% year on year, demonstrating the fastest growth in all the regions – although this is down from 8% in August.

IATA suggests that the increased demand in this region is a result of foreign investments into Africa and its strong trade volumes from the Asia Pacific region.

However, with the African airfreight market having a total market world share of just 1.6%, its recent growth is not likely to influence overall trends. IATA also notes the volatility of the African market, due to its size.

Meanwhile, the association said that geopolitical and economic risks are continuing to impact the global market.

IATA highlights the significance of further disputes between the US and China in September, amid their ongoing trade war.

On September 1, the US applied additional tariffs on goods worth $125bn imported from China.

In response, China added tariffs on $75bn worth of US goods.

However, the US then postponed further tariffs, scheduled for October, to reduce the financial impact that they would have on shoppers during the festive period.

“October’s pause on tariff hikes between Washington and Beijing is good news,” said Alexandre de Juniac, director general and chief executive of IATA. “But trillions of dollars of trade is already affected, which helped fuel September’s 4.5% year-on-year fall in demand. And we can expect the tough business environment for air cargo to continue.”

Exploring the Asia Pacific region’s performance and taking into account other, more local risks – such as the Hong Kong protests; and strict trade controls implemented by South Korea and Japan, against each other, around August-September time – IATA reveals that volumes decreased by 4.9% year on year in September.

In addition, the Asia Pacific region, which has a total market world share of 35.4%, was the first, in November last year, to post a year-on-year decline in volumes when the market first turned.

Known for being a manufacturing and distribution hub, the region has been heavily impacted by the risk factors outlined above.

For North American airlines, IATA says that volumes for were down 4.2% year on year in September – inline with the 2.4% decline reported in August.

Meanwhile, European airline volumes were down 3.3% year on year in September which, (similarly to North American airlines), in line with the 3.3% year-on-year decline for the previous month. IATA suggests that uncertainty surrounding Brexit has impacted volumes in this region.

“Removing the regular seasonal volatility in the monthly data gives a different perspective to recent developments,” IATA says. “It clearly illustrates the fact that most of the decline in airfreight volumes occurred in late 2018 and early 2019, with the downward trend having plateaued since that time.”

More positively, IATA projects that: “If the current trend is continued in the monthly outcomes, the year-on-year growth rate will return to positive territory in the early part of next year.”