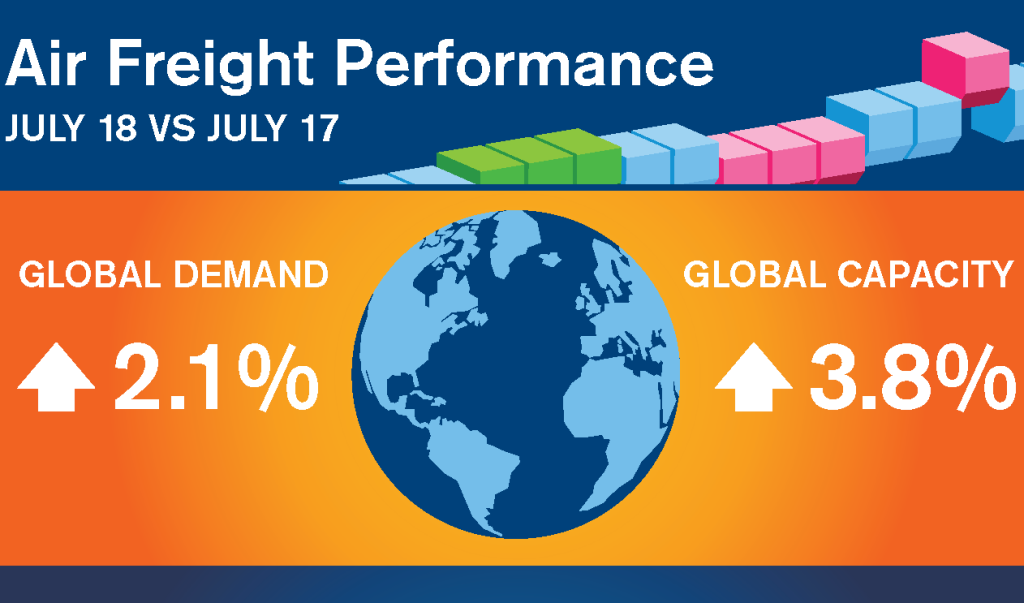 According to the latest statistics produced by IATA, demand for airfreight services – as measured in freight tonne kilometres (FTKs) flown, rose by just 2.1% year on year in July.
This was, the trade association noted, the slowest monthly year on year pace of growth seen since May 2016, and well below the five-year average growth rate of 5.1%.
Meanwhile, airfreight capacity – as measured in available freight tonne kilometres (AFTKs) – grew by 3.8% year on year in July. This was the fourth time in five months that capacity growth had outstripped demand growth.
As a result, the freight load factor declined by 0.7 percentage points to a figure of 42.7%.
IATA pointed to a number of reasons why demand may have slowed significantly. One of them may well just have a one-off impact – the temporary grounding of Japan’s Nippon Cargo Airlines (NCA) freighter fleet over maintenance-related safety concerns – but other causes are more structural in nature.
It said the inventory re-stocking cycle, which requires quick delivery to meet customer needs, ended at the beginning of the year
Also, there has been a broad-based weakening in manufacturers’ export order books. Specifically, export order books in Europe started weakening in February and have also fallen in China and Japan in recent months
Finally, longer supplier delivery times are being reported by manufacturers across Asia and Europe. This typically means that they have less need for the speed afforded by airfreight shipping.
Alexandre de Juniac, IATA’s director general and chief executive, observed: “July demand for air cargo grew at its slowest pace since 2016.
“We still expect 4% growth over the course of the year, however the downside risk has increased.
“The tariff war and increasingly volatile trade talks between the world’s two largest trading nations – China and the US – are rippling across the global economy putting a drag on both business and investor sentiment. Trade wars only produce losers.”
Breaking down the statistics by geographical area, all regions reported year-on-year demand growth in July except Africa. Less positively, all regions except Africa and Latin America reported that capacity growth exceeded any growth in demand.
Carriers based in the Asia-Pacific region saw airfreight demand growth slow year on year to 0.9%. Capacity, however, increased by 3.9%.
North American airlines’ freight volumes grew by 2.6% compared with July 2017. Capacity, meanwhile, increased by 4% year on year.
European airlines recorded a 2.6% year-on-year improvement in freight volumes in July. This represented a significant slowdown from the five-year average annual growth rate of 5.6%. Capacity increased by 4.4% year on year.
Middle Eastern carriers’ enjoyed the biggest year-on-year growth in air cargo volumes of any region in July, with an improvement in demand of 5.4%. Capacity increased by 6.3%.
Latin American airlines experienced a year-on-year slowdown in freight demand growth in July to 3%. This was only a quarter of the year-on-year growth rate enjoyed in June (11.4%) but still above the 5-year average pace of 2.1%. Capacity fell by 7.8%.
African carriers had the hardest time, with freight demand down by 8.3% compared to July 2017. This was the fourth time in five months that demand had contracted, IATA noted. Capacity fell by 0.7% year on year. 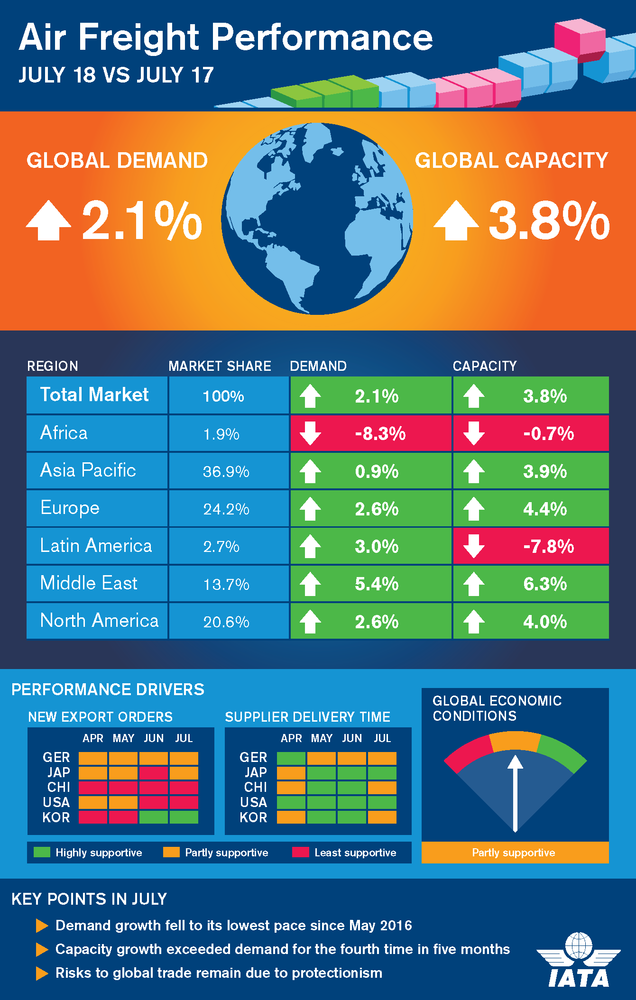