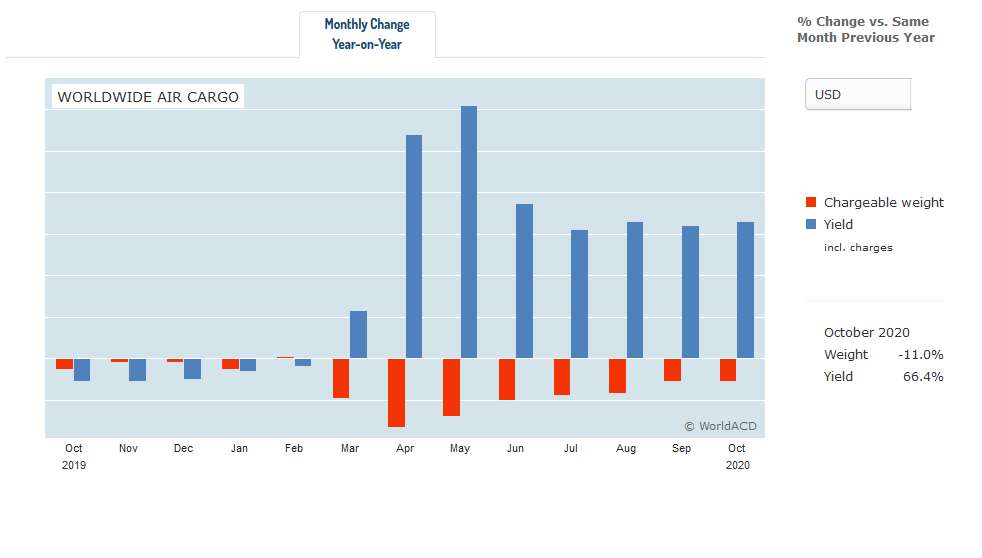 The air cargo market’s gradual recovery appears to have slowed in the first two weeks of November as demand and load factors plateaued, according to WorldACD data.

Figures for the first half of the month show that volumes stood at 48% of the October total, meanwhile the average load factors for the period were slightly lower than in October.

“In other words, any month-on-month growth in November will have to come from the second half of the month,” WorldACD said.

While worldwide rates continued to improve – going from $3.13 per kg at the end of October to $3.28per kg in the second week of November –  for the first time in many weeks, yields/rates from China dropped, WorldACD said.

The data provider also provided an oversight into performance in October.

It said air cargo volumes were down by 11% on a year ago, but were up 8% on September levels.

“Worldwide air cargo contracted by one third year over year in April 2020. Since that very steep decline, the sector has bounced back steadily,” WorldACD said.

Airline’s cargo revenues were up by 48% year on year in October thanks to rates being up by around 66% on last year’s levels.

Load factor increases have slowed as the gap between supply and demand narrowed: freighter capacity increased by 5% month on month, whilst cargo capacity on passenger aircraft grew by 11%.

“The load factors for the two aircraft types increased by a modest 2% respectively 1% over the month of September,” WorldACD said.

Asia Pacific continues to be the best performer of the larger regions in terms of air cargo.

“At the risk of sounding like a broken record, we report that – among the three largest regions – the origin Asia Pacific did best again in volume in October, falling 7% year on year, but recording the one-but-highest year-on-year increase of price/kg (+82.4%),” it added.