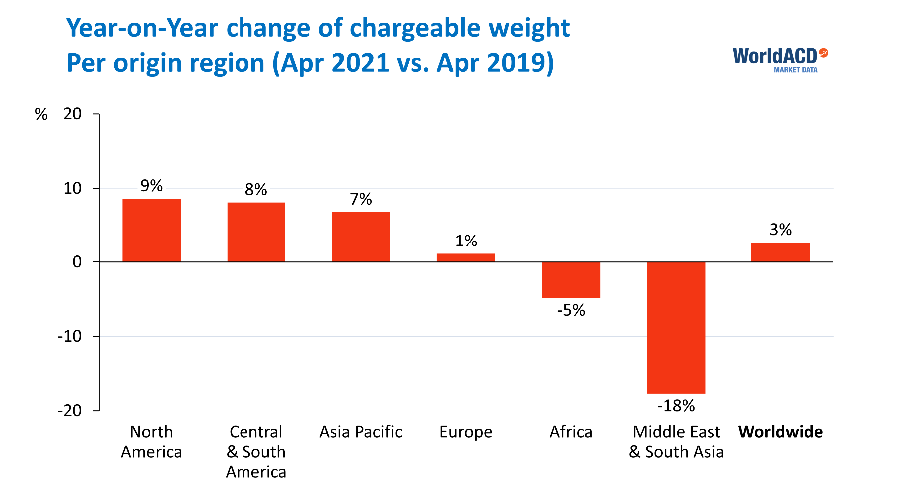 Global airfreight volumes and capacity were up in April 2021, the latest figures from analyst WorldACD, suggesting — as with March figures — “some kind of normality”.

Global demand in April was up 53% on a year ago, while widebody capacity was up by 51%, reflecting the collapse in bellyhold networks a year ago.

Additionally, the average airfreight rate per kg increased from $3.12 in March to $3.30 — which is 12% lower than a year earlier when the initial Covid-related capacity crunch hit the market.

The analyst added that last month, available bellyhold capacity on widebody passenger aircraft almost tripled year on year, and was “very close to the total capacity produced on widebody freighters”.

Comparing April 2021 figures with the same period in 2019 to reflect pre-Covid levels, the analyst’s recorded increased demand in: general cargo (61%), live animals (78%) and flowers (67%). For special cargo, vulnerable/high-tech increased by 30%, while pharma declined by 3%.

Continuing figure comparisons with 2019, airlines based in the Americas gained the most in air cargo exports (8%), a bit more than Asia Pacific (7%) and Europe (1%).

Continuing comparisons with 2019, demand for express increased year on year by 59%; while demand for shipments in excess of 5 tonnes increased by 32%, “reflecting the growing importance of charters during the Covid-19 period.”

Finally, the analyst compared rates in April 2021 with the same period in 2019.

Rates in Asia Pacific increased by 117%, and from the Americas and Africa they increased by 30%. Meanwhile, rates increased from China to Europe by 117%; and 152% to North America.

In addition, rate increases from Europe to North America were up 137%.