Air cargo demand was flat in the first quarter of the year as Russia’s invasion of Ukraine and lockdowns in China put the breaks on growth.

Figures from data provider WorldACD show that chargeable weight transported by air cargo increased by 2% year on year in January and February but then slipped to a decline of 3% in March.

“However, we should point out that business from China South East (incl. Guangzhou, Shenzhen and Xiamen) was up 18%, compared with  minus 29% from China East (incl. Shanghai),” the data provider said.

“When we further look at March on a country level, we observe that for 74 of the 155 countries for which WorldACD publishes individual data, we find negative outbound growth.

“That means there were still more countries with positive volume growth.”

Eastern Europe saw its cargo imports drop 38% year on year in March and exports were 15% down.

“From the worldwide region-to-region markets, Europe to/from Asia Pacific was hit hardest in March, as one would expect given the developments on both ends of this market: weight was down -20% eastbound and -29% westbound.

“The Americas did best in March 2022 and first quarter 2022. Both North America and Central & South America have seen high single digit growth figures, for outbound as well as inbound air cargo volumes in this period.”

Looking at rates, WorldACD said that yields in the first quarter were 29% up on last year in $ per kg terms. 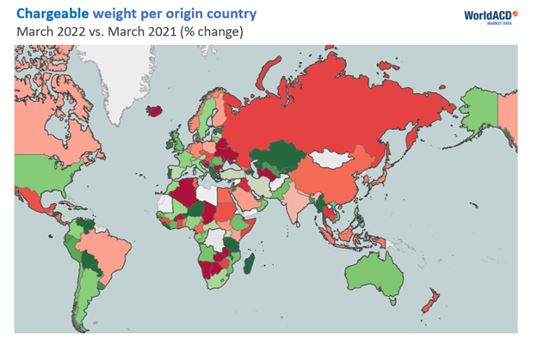