WorldACD: Air cargo demand on the up in January

Air cargo demand in January matched the performance of a year ago — the first month since the start of the pandemic not showing a year-on-year decline.

Figures from WorldACD show that while demand was flat compared with a year ago, airfreight rates increased by around 75% year on year, although they were down on December levels.

The analyst pointed out that the Chinese New Year break (in January last year and February this year), which typically results in a demand dip, may account for some of the performance in demand.

However, WorldACD added that even taken the holiday into account, demand for the month was stronger than usual, demonstrated by the lower drop off compared with the peak month of November.

Worldwide load factor was up by 17% year on year, but dropped 2% compared with December.

“The outstanding performers in January were virtually all to be found in the Asia Pacific region, which has indeed recovered quickest from the consequences of the pandemic,” WorldACD said in its monthly analysis.

“The area as a whole improved by 12% YoY outgoing and 14% incoming. The origins Vietnam and Japan each increased their outgoing volumes by more than 30%, closely followed by Taiwan (+25%).

“Outside Asia, only the US managed to improve its performance as an air cargo origin (+3% YoY), with the Midwest as the main engine of growth (+13%). A striking feature of the North American market was the fact that incoming business from Europe showed the highest YoY rate increase of all major markets: +147%.”

It added that express, high tech and general cargo were the product categories showing the largest volume growth compared with a year ago — express was 40% up.

In terms of changes in US dollar rates, WorldACD noted increases varying from +18% for flowers to +83% for general cargo (see chart below). 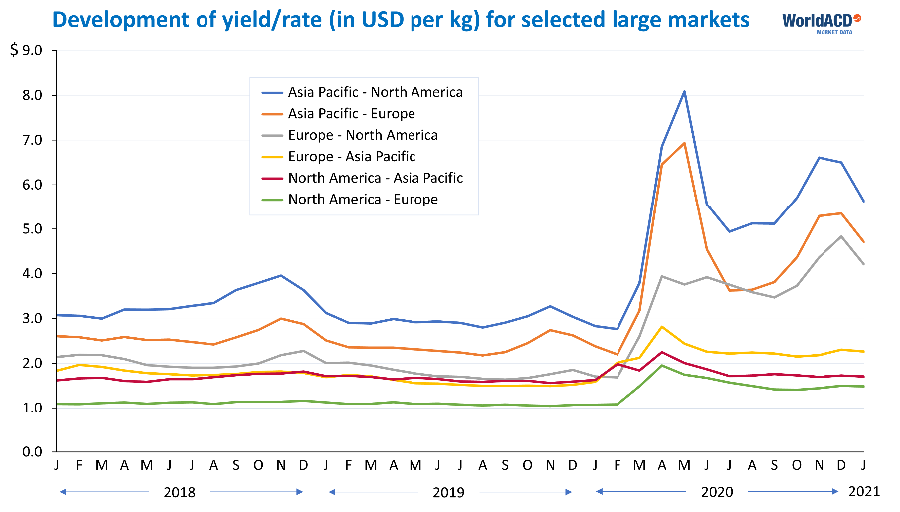