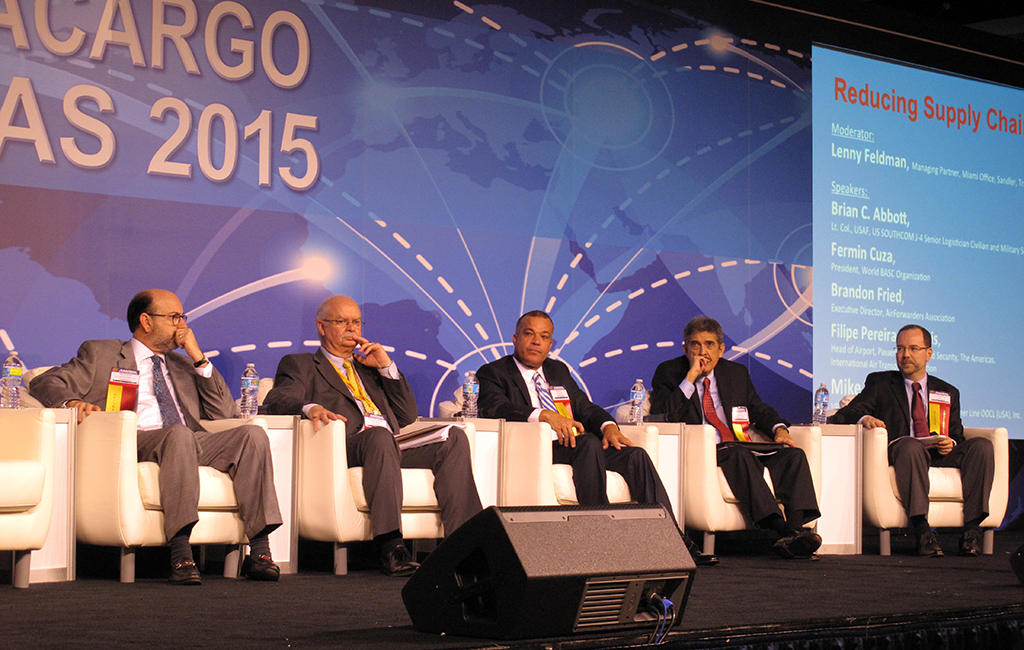 The executive director of the US Air Forwarders Association (AFFA) has said that a lack of co-operation between agencies that will implement new US air cargo security regulations is a concern for the industry.
Speaking during a panel debate on reducing supply chain risk at the Air and Sea Cargo Americas event, AFFA’s Brandon Fried said he had concerns about the US air cargo advance screening (ACAS) initiative because of the interaction that would be required between the US Transport Security Administration (TSA) and Customs and Border Protection (CBP).
“My big issue is that now we have the ACAS initiative coming where you will be required to transmit house air waybill data before the plane will get loaded,” Fried said.
“CBP will do an assessment piece on you but TSA will be responsible for carrying out a screening [if cargo is flagged] – they will be the ones to say do or don’t load it should that occur.
“How that interaction between CBP and TSA occurs is still not completely settled at this time. Plus, there is also going to be an outbound export component to this.
“We see times where there is a lot of co-operation between the two agencies but also times when co-operation between the two agencies wanes and that is scary to us.”
He added that he also had concerns about the pace of progress of implementation of the ACAS requirement.
He explained that other countries were also looking to develop their own advance screening requirement and were looking to use ACAS as a template.
He said there was a danger that if ACAS took too long to be implemented, other countries could create their own requirements using different data elements and creating a complex patchwork of varying regulations.
Fried was also asked if there was anything from a security perspective that kept him up at night.
In response he said the prospect of a bomb being smuggled onto an aircraft as cargo was a concern because of the reaction it would create.
In reference to the recent Russian aircraft disaster over Egypt, he said: “Experts are saying it might have been a bomb and that keeps me up at night because, God forbid, it was put in cargo in some way, then all of a sudden airlines could, because of an abundance of over-caution, prevent cargo being flown on these planes.”
The panel debate later looked at what steps should be taken to reduce supply chain risk. Speakers agreed that companies should carry out risk-based assessments, look to gain certification such as CTPAT, AEO or BASC, educate employees to risk and make sure management buys into any risk measures.
They were also asked if the cost of implementing certification was too high. In response they said although it could be costly, the savings generated through reduced theft or damaged caused, plus the fact you could be fined if you did not meet government security requirements and the fact that not doing so could endanger lives meant it was worth the investment.