Airfreight volumes on the up for K+N 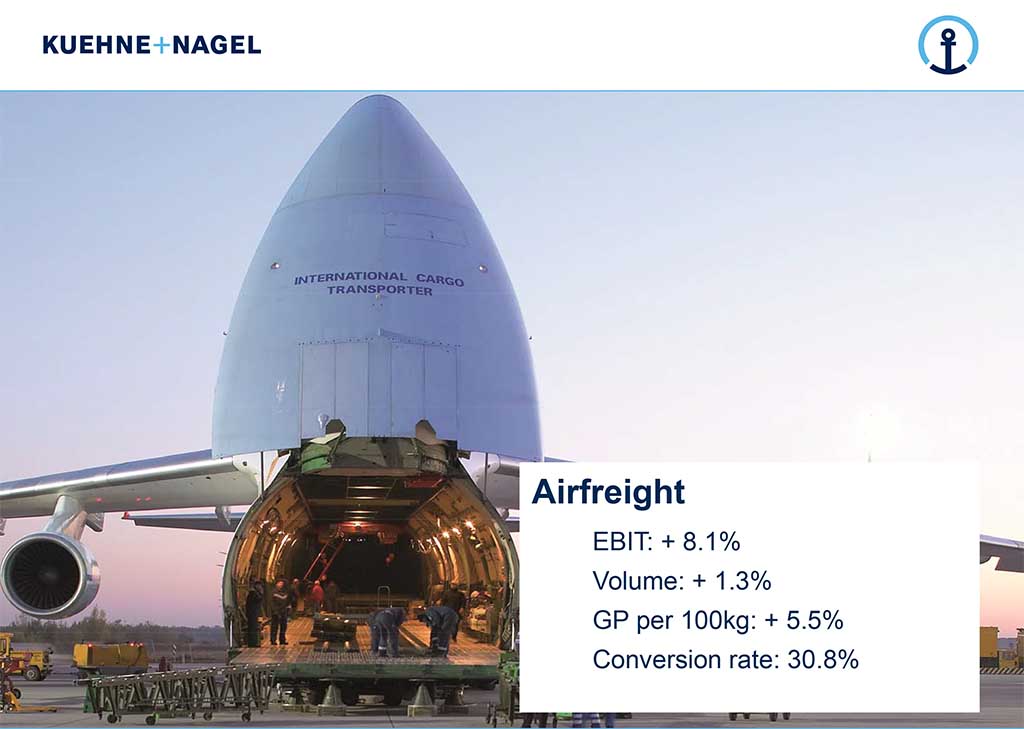 Logistics services giant Kuehne+Nagel (K+N) has reported its half-year results for the six-month period ending 30 June.
The Switzerland-headquartered company said that while net turnover fell year on year from CHF8,225m ($8,366m) to CHF8,147m ($8,287m), gross profit rose by 8% compared to the first half of 2015, improving from CHF3,018m ($3,070m)to CHF3,257m ($3,313m).
Earnings before interest and taxation also rose, from CHF410m ($417m) to CHF455m ($463m). Earnings for the period improved by 9% from CHF326m ($332m) to reach CHF356m ($362m).
The airfreight part of the business had mixed fortunes. Shrinking demand and excess capacity were reported, but K+N nevertheless handled 1.3% more air cargo over the initial six months of this year than in the same half-year period of 2015.
Moreover, there was a particular improvement during the second quarter, 2.9% greater airfreight tonnage volumes being handled year on year over those three months.
The first quarter of this year saw a slight decline in K+N’s airfreight volumes, down by 0.3% year on year, due in part to the industrial action at US west coast ports which pushed sea cargo to airfreight and provided a one-off boost in 2015.
A K+N statement attributed these improvements in large degree to an “expansion of customer-specific services and industry solutions” provided by the company’s airfreight business.
Other positive air cargo trends were reported in relation to strong export traffic out of Asia, the Middle East and Africa.
Earnings in relation to K+N’s air cargo business rose year on year by 8.1% to reach CHF147m ($150m).
Detlef Trefzger, K+N International’s chief executive, commented: “The first half of 2016 has been shaped by different regional economic development trends.
“Global trade showed a lack of growth momentum. Our strategy to focus on organic growth and gaining market shares by offering industry-specific solutions once again led to increases in volumes and results.
“Our Group delivered a strong performance and has significantly improved gross profit, and therewith increased profit,” Trefzger added.
His enthusiasm was shared by Joerg Wolle, chairman of K+N International, who noted: “In the second quarter, the Kuehne + Nagel Group improved its performance and managed to expand market shares in a heterogeneous economic environment.”
Looking forward, he assessed: “Based on its successful strategic focus, we are confident that we can continue the momentum in volume and profit into the second half of the year from today’s perspective.”
As revealed in the 25 Global Freight Forwarders List from consultant Armstrong & Associates, K+N is the world’s second-biggest airfreight forwarder (after DHL Supply Chain & Forwarding). In 2015, it handled 1,250,000 tonnes of air cargo. 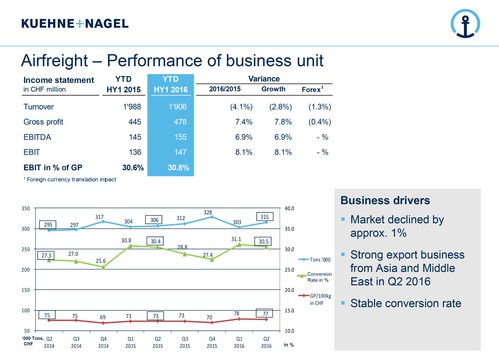 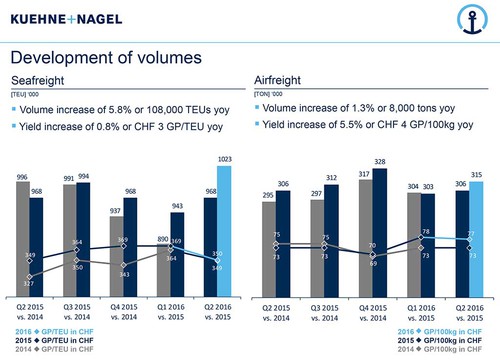 Source for both graphics: K+N