Cargo bosses fear reputational risk from trade sanctions as US imposes $1.3bn in penalites for 2019 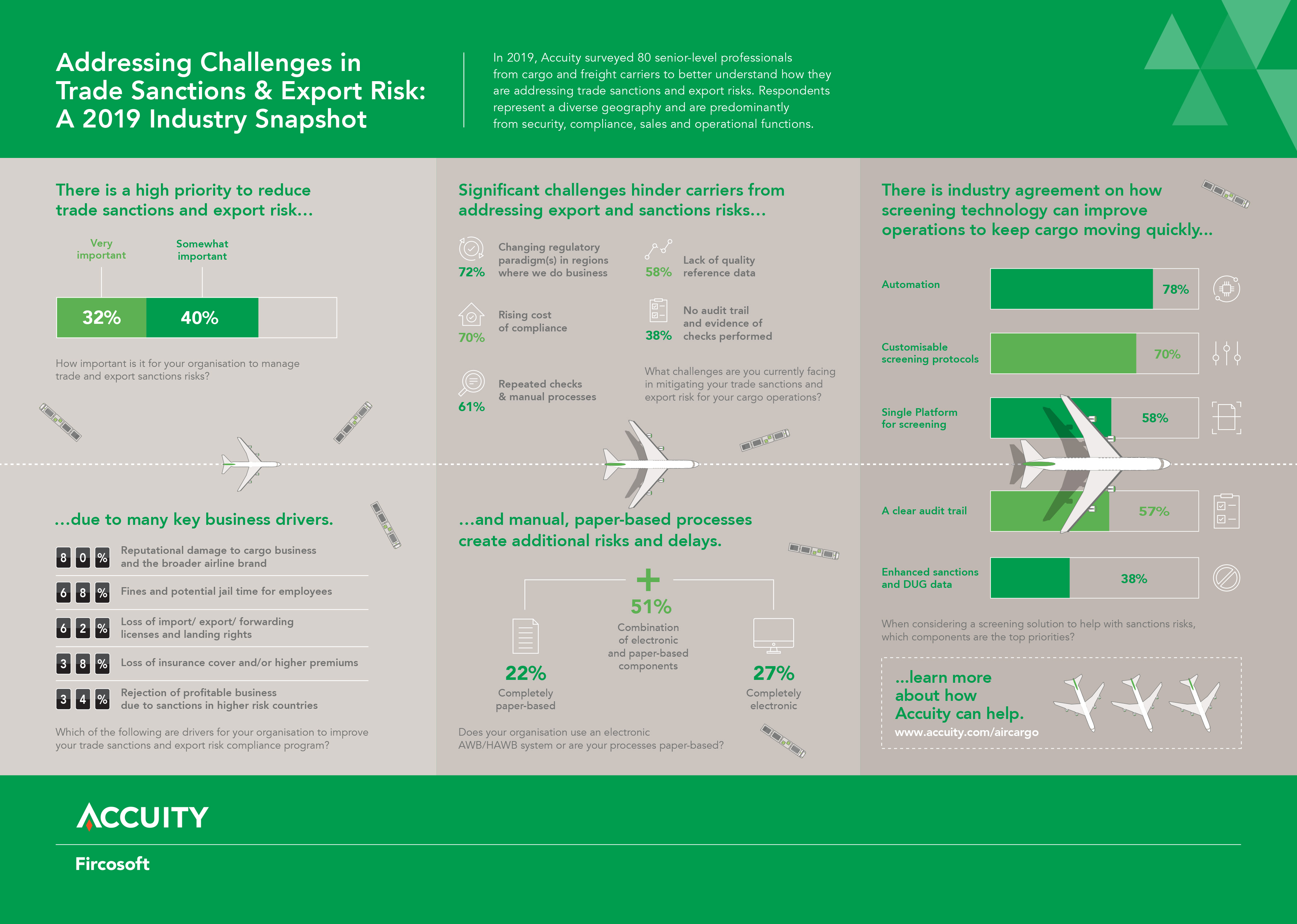 Around 80% of cargo businesses named reputational risk as driving their trade sanctions and export risk compliance programmes as the US authorities have already imposed a record $1.3bn in penalties this year.

Accuity, the provider of financial crime screening and payments solutions, said that its survey made it clear that “the cargo sector cannot afford to be a weak link in the supply chain”.

The penalties by the US Treasury Department’s Office of Foreign Assets Control (OFAC) have spanned a range of industries.

The survey also found that 73% of organisations still use at least some paper-based systems to deal with air waybills and house waybills.

In addition, while 72% find challenging the changing regulatory paradigms in the regions they do business. However, 78% list automation as a high priority when considering a screening solution.

According to Accuity, the vast majority of cargo firms are concerned about protecting their brand and reputation when it comes to trade sanctions and export risk.

Said an Accuity spokesperson: “The poll of senior managers from security, compliance, sales and operational functions, shows that the industry is increasingly aware of the risks of non-compliance and is beginning to take proactive steps to address them.”

When asked about the importance of effectively managing sanctions risk, 72% classified it as “somewhat” or “very” important.  The most significant threats that drive this urgency include damage to brand and reputation (80%), fines and potential jail time for staff (68%), and loss of import, export, or forwarding licences and landing rights (62%).

Cargo firms have an obligation to screen documentation, such as air waybills and house waybills, to check whether the entities listed as part of a shipment are subject to sanctions and whether the cargo described contains dual-use goods (goods that can have both civilian and military purposes).

A guidance paper published by IATA said this was “a priority for airlines which are all doing their utmost to develop appropriate due diligence procedures to manage shipments of so-called dual use goods, military cargo or embargoed/prohibited/restricted items.”

David Loeser, senior director of product strategy at Accuity, said: “Dual use goods are incredibly difficult to spot. For example, what we know commonly as ‘tear gas’ could be listed on a document as ‘bromobenzyl cyanide’, by its chemical formula ‘C8H6BrN’, or even its CAS number ‘5798-79-8’.

“We cannot expect cargo operators to act as scientists, but they do have a responsibility to check their shipments for what could potentially be very controversial cargo. The only way they can fulfil this obligation is by implementing intelligent screening technology to automate the process.”

Speaking to Air Cargo News, Loeser said that one element of the survey that surprised him was that companies saw the benefits compliance could bring as well as the risks of failing to comply.

The survey showed that 34% of respondents said that one of the key business drivers to improve trade sanction and risk compliance was the rejection of profitable business.

“I used to think [the driver to improved compliance] was more of the stick, rather than the carrot,” he said.

“But the operation efficiency and the business opportunities that [trade sanction compliance] might represent, that is different to what I went in thinking.

“A lot of the drivers in the regulatory space are around fines and negative reputation, which was still a concern for 80% of the respondents, but the other side is that companies felt they may be missing out on some operational improvements or profitable business opportunities.”

He continued: “[Compliance] gives the opportunity to open up new business opportunities where there are not full blown embargoes on an entire county or region, but there are nuances.

“If you are not able to identify that nuance in a programmatic/systematic way, you might say ‘actually, we are not going to engage in business in that region or that country what so ever’.”

The survey also revealed some of the challenges that air cargo carriers and freight forwarders face when trying to achieve comprehensive sanctions compliance:

“Exacerbating these challenges,” said Accuity, is that  73% of those surveyed stated they still rely on at least some paper-based processes when managing air waybills and house waybills – “a major hindrance for a sector that positions speed as its competitive advantage”.

Yet, firms are starting to realise that using technology to drive efficiency is the best way to address business risks, improve the efficiency of their operations, and moderate the cost of compliance.

Added Accuity: “An overwhelming 78% listed automation as a high priority when considering a screening solution, with 70% prioritising a single system to streamline compliance checks”.

“Not only does a robust screening strategy protect them from reputational risk or loss of their licences, but it can give them a competitive edge, by equipping them to do business with confidence in areas their peers cannot.”