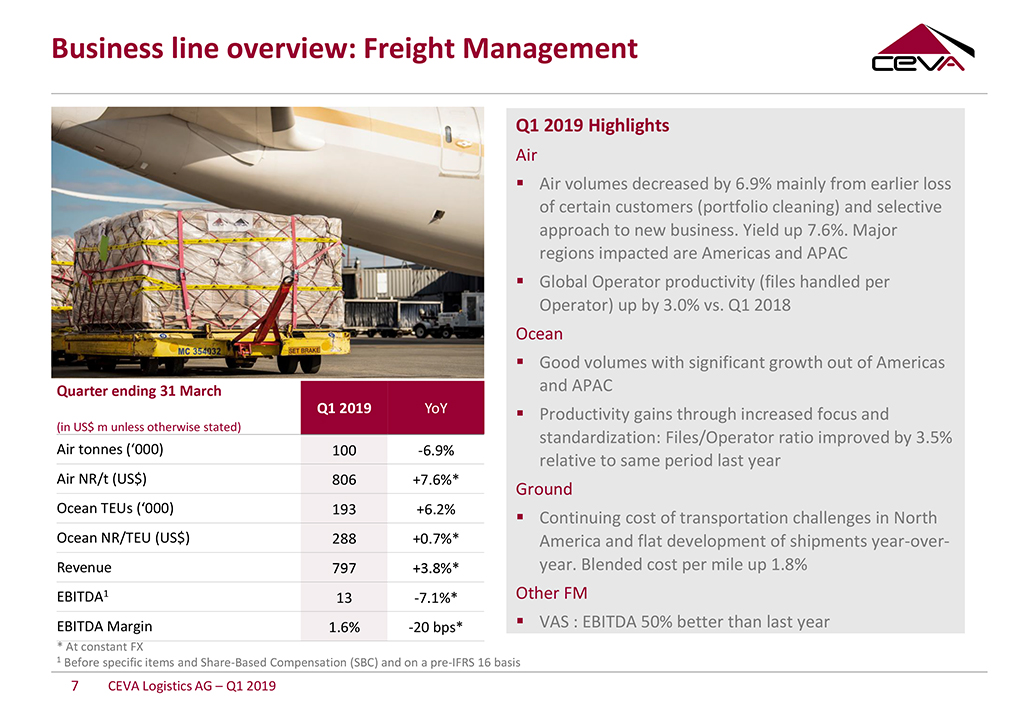 CEVA Logistics saw a decline in airfreight volumes during the first quarter of 2019 and the parent group has announced a series of top management changes in line with the takeover by French shipping giant CMA CGM.

Air cargo volumes in the first quarter fell 6.9% year-on-year to 100,000 tonnes, mainly from “downtrading of some trade lanes” and a “selective approach to new business” whilst yield (net revenue per ton) increased by 2.2% to $806 per ton.

Airfreight experienced “a relatively slow start” to 2019, with weaker volumes than in the same period last year. Productivity actions “continued to deliver improvement” as the operator ratio rose 3% in air.

Total group revenue increased by 1.1% in constant currencies to $1.7bn in the first three months of 2019, but declined 5.2% on a reported basis due to negative translation of some foreign currencies into the US dollar. The group’s EBITDA was $134m.

In what was described as CEVA Logistics’ “new governance to accelerate its strategic transformation,” CMA CGM chairman and chief executive Rodolphe Saadé was elected as chairman of the CEVA board of directors.

Announcing the appointment, a CEVA spokesperson said that Sartini will bring “his experience and expertise to CEVA as it embarks on a new journey” which will also see CEVA delist from the Swiss stock exchange.

CMA CGM now holds more than 98% of the share capital and voting rights of CEVA, building up its previous minority stake after logistics player DSV launched an unsolicited takeover bid for CEVA in October 2018, later withdrawn as the Denmark-based forwarder then entered successful takeover talks with Swiss rival Panalpina.

Rolf Watter, Daniel Hurstel and Emanuel R. Pearlman were re-elected for a one-year term of office until the AGM 2020. Three new Board members have been elected: Farid Salem, Michel Sirat and Béatrice de Clermont-Tonnerre.

The three independent directors are Rolf Watter, Manny Pearlman and Béatrice de Clermont-Tonnerre. Finally, KPMG has been elected as the independent auditor for the next one year term of office until the AGM 2020.

Revenue in CEVA’s Freight Management arm decreased by 0.7% to $797m in the first quarter. In constant foreign exchange, revenue increased by 3.8% year-on-year.

Said the spokesperson: “CEVA continued to experience good volume growth in ocean, up 6.2 % year-on-year to 192,900 TEUs, ahead of market growth. Ocean yield (Net revenue/TEU), was a robust $288/TEU, which represents a strong increase compared with the fourth quarter of 2018 ($226 /TEU).

In its outlook, the logistics provider stated: “Despite a challenging global environment in the beginning of the year, CEVA has performed in line with its roadmap and targets and achieved a number of productivity improvements. The implementation of CEVA’s new strategic plan, prepared jointly with CMA CGM, and the close cooperation between the teams of the two companies are going to drive an improvement in CEVA’s financial performance and help it turn around quickly.

“This cooperation will be further improved with the opening of a CEVA operational center in Marseilles to bring together CEVA’s management teams and support functions, i.e. 200 jobs (creation and transfer).” 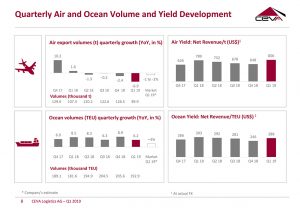