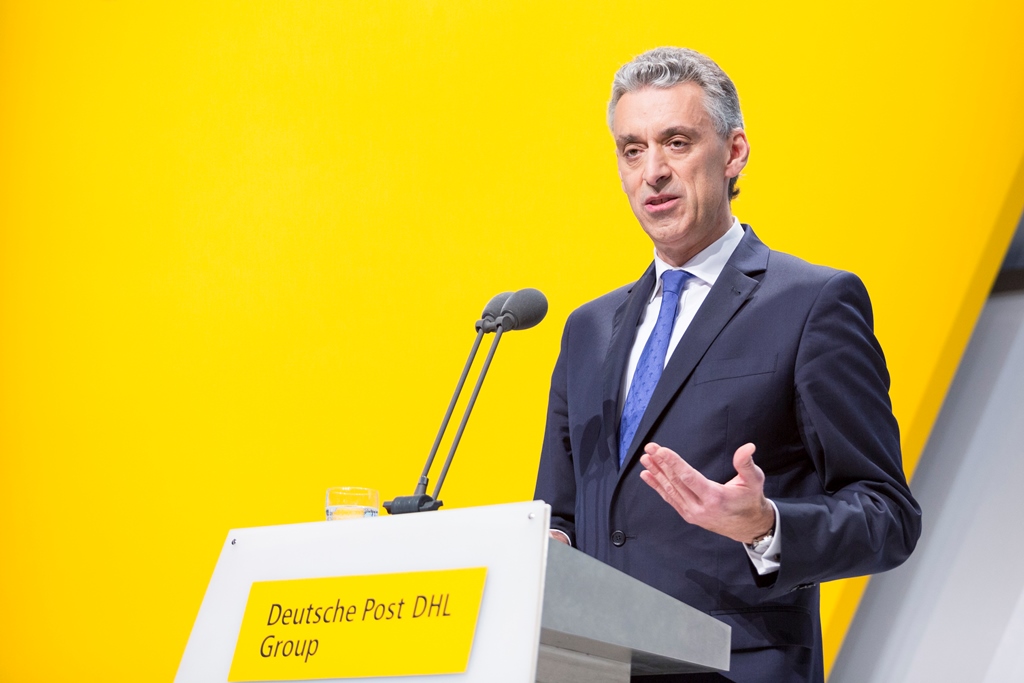 Deutsche Post DHL Group (DP-DHLG) saw operating profit climb by 7.2% to €3.7bn in the 2017 financial year, revenues were up by 5.4% to €60.4bn, with all four divisions contributing to the increase.
The German logistics giant and the world’s largest purchaser of airfreight capacity said that its DHL Express division and the German and international parcel and e-commerce businesses “continued to see particularly dynamic growth”.
There was also a strong end to the year, with a 2017 fourth quarter increase of 4.5% in total group revenue to €16.1bn.
The performance of Global Forwarding, Freight improved over the course of 2017 said the company in its full year results statement. Revenue increased by 5.4% to €14.5bn in 2017.
“The division registered significant volume growth in both air and ocean freight. Road and rail transport also developed positively in Europe, particularly in Germany.
“The division’s EBIT increased by 3.5% to €297m, although margins in air and ocean freight came under appreciable pressure particularly in the first half of 2017 due to the considerable increase in freight rates.
"In the second half of the year, the division was increasingly able to pass on the higher prices to its customers and with this significantly improve earnings in the last six months."
Full year revenue in the post, e-commerce and parcel (PeP) division increased by 6.4% to €18.2bn in 2017. The division’s positive performance was primarily attributable to growth in volumes and revenue in the e-commerce-parcel business unit.
The most substantial gain was posted by Parcel Europe, where revenue grew by 65.4%. A key driver of the increase was the first-time inclusion of the UK Mail results (2017 revenue: €536m).
In the PeP division, operating profit increased by 3.9% over the prior-year level to €1.5bn. The principal factors contributing to the increase were growth in the German Parcel business, stable post revenues and "disciplined cost management," while earnings growth was held back by further investments in the international parcel network and the e-commerce business.
The upward revenue and earnings trend in the express division continued in 2017. Revenue rose by 9.5% on the prior year to €15bn.
Said DP-DHLG of express: “Particularly encouraging was the fact that the division registered growth across all regions. This dynamic performance was driven once again by the international time-definite (TDI) delivery business, where daily volumes increased by 9.9% year on year.
“The volume increase will enable the division to utilize its unique global express network even more efficiently. Operating profit grew by 12.4% to €1.7bn on the back of strict yield management and continuous improvements in the network. The operating margin rose to 11.5%, up from 11.2% in the prior year.
Revenue in the supply chain division increased by 1.4% to €14.2bn in 2017. Adjusted for negative currency effects, the year-on-year increase in revenue amounted to 4.6%.
Said the company: “Once again, supply chain successfully generated new business. The division concluded additional contracts worth €1.5bn with both new and existing customers during 2017.”
Frank Appel, chief executive of DP-DHLG, said: “Thanks to successful business development in all four divisions, especially outside Germany, our company has registered another very good year.
“In 2017 we took another major step on the road to achieving our strategic and financial goals for 2020.
“With our international focus and our firm orientation towards the fast-growing e-commerce market, we implemented the right measures early on and are now positioned better than ever for future growth.”
Appel added: “At the same time, we are increasingly leveraging the digitalization opportunities that present themselves in all four divisions and expanding our foundation for a successful future.”
The logistics operator expects that the “solid pace of economic expansion," further business growth and operational improvements in the individual divisions will lead to increased earnings in 2018, with a forecast rise in EBIT to approximately €4.15bn.