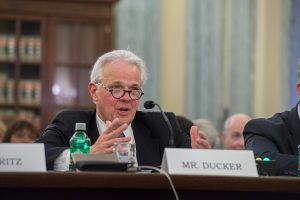 Mike Ducker, president and chief executive of Fedex’s forwarding arm, FedEx Freight, is to retire on August 15. Ducker, a 40-year FedEx veteran, took the helm at FedEx Freight in 2014. His successor will be named later.
FedEx Corporation chairman and chief executive Fred Smith said: “For more than 43 years, Mike Ducker has answered the call when FedEx asked him to lead in each new opportunity and role.”
Smith added: “His leadership and strategic instinct have been integral in growing the global business we have today. There is no way to pinpoint his greatest accomplishment, but I can tell you it is hard to imagine FedEx without Mike Ducker, and that is the mark of a truly transformational leader.”
Ducker joined FedEx Express’s frontline operations team at its Memphis Hub in 1975. After rising through the ground operations ranks in the US in the 1980s, he became vice president of Southern Europe based in Milan, Italy, in 1991.
He became the vice president of the South Pacific and Middle East region in 1992, and then senior vice president of the Asia/Pacific region in 1995.
He returned to the US in 1999 as executive vice president/president, international and in 2009 he also became the chief operating officer of FedEx Express before assuming his current role at FedEx Freight.