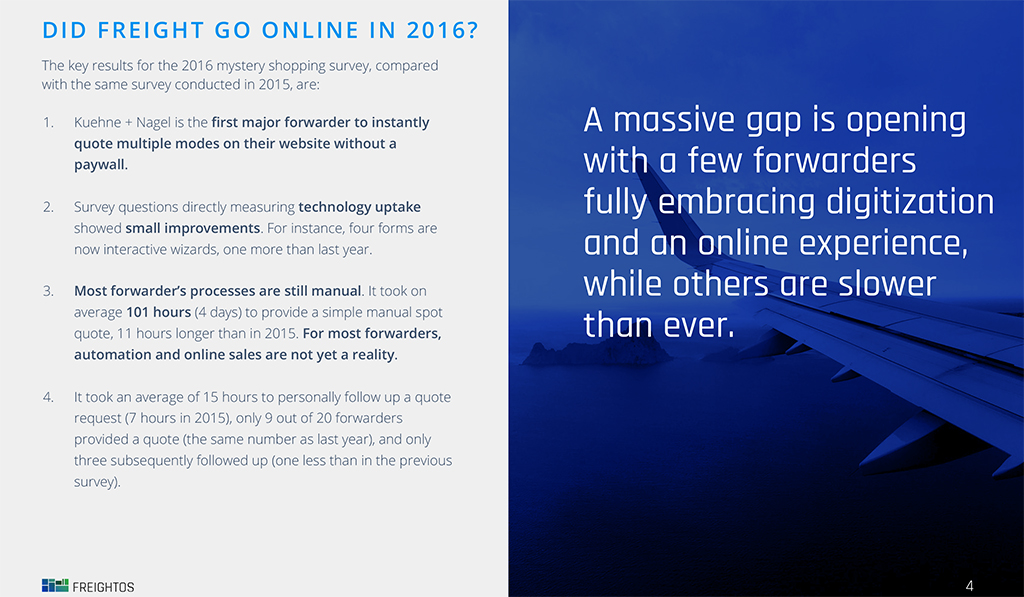 A secret shipper survey of the twenty top forwarders found that it was “mostly talk, but also a little action” when it comes to developing online freight sales.
Online booking portal Freightos repeated a mystery shopping survey in late 2016, comparing the results with the first one in 2015.
The online freight marketplace described “a massive gap is opening with a few forwarders fully embracing digitization and an online experience, while others are slower than ever”.
The survey found that Kuehne + Nagel is the first major forwarder to “instantly quote multiple modes on their website without a paywall”.
According to the survey, most forwarder’s processes are still manual: “ It took on average 101 hours (four days) to provide a simple manual spot quote, 11 hours longer than in 2015”.
Also, it took an average of 15 hours to personally follow up a quote request (seven hours in 2015), only nine out of 20 forwarders provided a quote (the same number as last year), and only three subsequently followed up (one less than in the previous survey).
Freightos found that selling online is “much more successful when potential buyers are being drawn to the website via digital marketing techniques”.
A supplementary digital marketing research survey of the same forwarders, revealed that only 30% use paid search (PPC) to drive website traffic, and only 20% publish blogs.
Freightos suggests that top forwarders may be focusing on other priorities for now, adding that there are some signs of change behind the scenes.
However, warned Freightos: "Competitors are already making their moves to digitize freight sales, and gain market share at the expense of top forwarders, including online forwarder startups, mid-sized forwarders, carriers and more ominously the tech giants, Amazon, Alibaba and Uber."
Zvi Schreiber, chief executive and founder of Freightos, said: “While it’s true that freight may be incredibly convoluted; other industries, like banking, faced tougher challenges in their transition.
“The top forwarders have the inside running for now, but there are winners and losers. It’s not yet clear how the race will end, but it is clear that the online race is well and truly on.”
In January this year Freightos said that interest in using airfreight instead of ocean freight improved as 2016 progressed.
In November 2016, Freightos launched its Freight Rate Calculator for international multimodal logistics that includes air cargo.
The methodology employed by Freightos for the secret shipper survey saw identical quote requests for an LCL shipment from China to Chicago were submitted, purportedly from a rapidly growing mid-sized US-based wholesale company.
When dedicated quote request pages were lacking, contact forms on websites were used. When those were lacking, no quote requests were submitted.