Forwarders to face margin challenge after year of volume growth 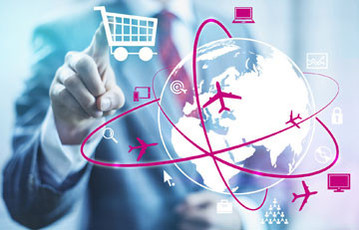 The global freight forwarding market is estimated to have grown by 2.7% last year, but revenues were down and margin pressure is expected to intensify over the next five years.
Analyst Transport Intelligence’s (Ti) Global Freight Forwarding 2017 report found that the global forwarding market is estimated to have grown by 2.7% in real terms on the back of demand growth in 2016.
The report found that there regional and modal variances in volume performance, with airfreight growth in China thought to have been robust, while maritime cargo growth was much weaker.
Conversely, the US saw moderate expansion in seafreight as airfreight growth faltered.
However, the report also found that collapsing air and seafreight rates – on the back of excess capacity and lower oil prices − caused revenues to “fall significantly”.
These findings mirror the key takeaways in Air Cargo News’ annual wrap-up of the world’s largest airfreight forwarders published last week.
While revenues were down, gross profits were up as the decline in forwarders’ buy rates was larger than that of the sell rates they offered to customers.
A survey contained within the report also found that forwarders expect margin pressure – excluding rate and volume effects − to intensify over the next five years.
Investment in technology and offering new/more value-added services is thought to be the best way to try and sustain margins, the survey found.
The report also looks at technologies that are changing the industry and the impact of digitalisation.
Ti analyst Alex Le Roy said: “The research we have conducted indicates that there is substantial demand for online interfaces which allow forwarders to better serve shippers.
"Nonetheless, it is clear that the scope of these solutions, in terms of geographic coverage for example, needs to broaden in order for them to deliver value.
“This will occur, but we are now bearing witness to a race for scale among the start-ups.”
The report also found that despite the perception that start-ups will have to dethrone incumbent logistics providers in order to succeed, the reality is that most of these emerging companies are set up to enhance or support today’s successful forwarders.
“Nonetheless, a few of the more ambitious companies pose a direct threat, and their disruptive potential should not be taken lightly,” Ti said.
In a foreword to the report, Ti chief executive Professor John Manners-Bell, asserted that the forwarding sector is facing a challenging time, not least because the global economic environment has remained volatile and difficult to anticipate, though this was nothing new and the sector had always coped well in such circumstances.
He cautioned however that structural challenges such as trends towards regionalisation and near-sourcing coupled with greater technological demands will prove more difficult to deal with.
“Political, economic and technological pressure will continue to shape the industry in the coming year," he said.
“One thing is certain, whether large or small, freight forwarders will need to remain agile if they are to flourish in an uncertain and complex world.”