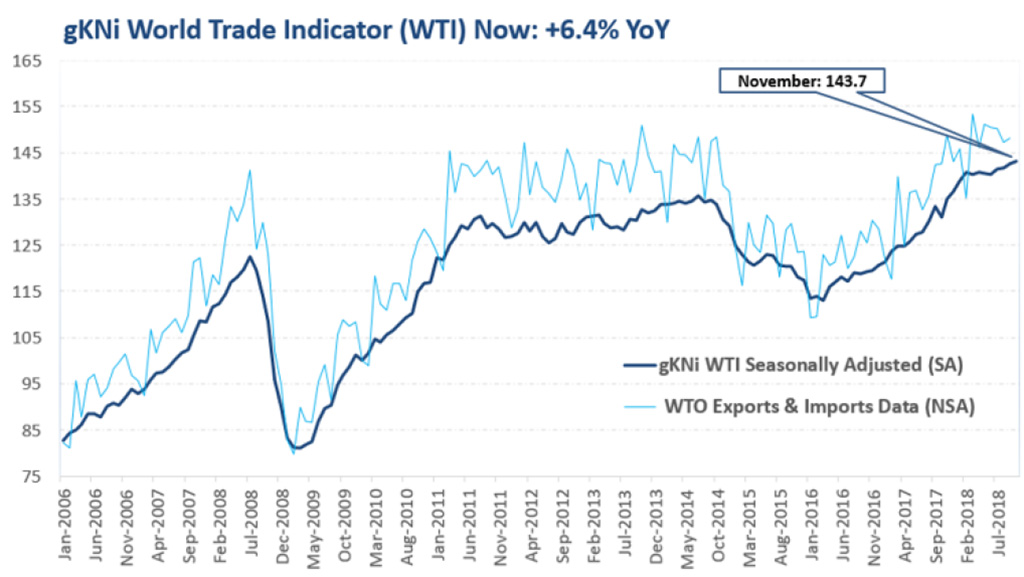 World trade experienced a slight upswing in recent months and reached a new high in November, while international merchandise trade has risen by 10.6% so far this year.
Emerging markets and North America are the main growth drivers. Despite new tariffs on exported products, China is benefiting from the strong US economy and this is expected to continue throughout December.
Those are the key findings of the latest trade analysis from the gKNi World Trade Indicator powered by LogIndex AG, the data company of Kuehne+Nagel (K+N).
The indicator stood at 143.7 at the end of November, up 0.3% on the previous month and 6.4% from last year. The World Trade Indicator not only reached a new record high, but this was also the fifth sequential increase since June.
The November trade report stated: "A main driver is strong domestic demand in the US but also in China. For China, we expect import growth of 21.2% YoY in the second half of the year (first half: +20.2% YoY in US$). Export estimates are at 10.6% (first half: +14.3%).
"Imports also overtake exports in the US at an annual rate of 9.1% and 7.1% respectively (first half: 8.1% versus 8.6%). The analyses show a particularly robust demand for consumer goods: In November, imports of furniture were over 10% higher than in the previous year.
"Even vehicles imports tend to be higher as do electronic products and capital goods. So far, the figures point to an extraordinarily dynamic fourth quarter."
In ocean freight, measured by the live throughput of ports, the unit volume declined slightly in November (-0.3% MoM), after a jump in October (+1.0%). Seafreight has still risen by +2.9% since the beginning of the year. The cargo and container throughput in US ports increased by +4.5% year-to-date and in Chinese ports by +2.6% year-to-date (compared with the same period in 2017).
Processing over 200m data sets every day, the indicator combines proprietary K+N anonymised, aggregated shipment data across different transport modes with external sources, such as throughput of ports, daily customs data, as well as detailed vessel and aircraft movements in real time.