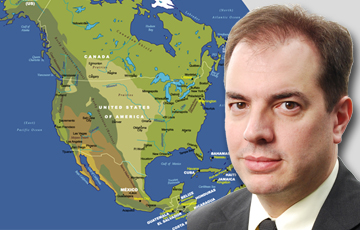 INADEQUATE airport, road and rail infrastructure is threatening the promising economic growth Latin America has enjoyed in recent years.
The continent should be building on those gains by augmenting its competitiveness across international markets and global supply chains – but instead it is plagued by excessive internal transport and logistics costs.
Average freight transport prices for trade between the USA and all its (trade) partners are usually less than double the tariff (trade taxes) costs – but when only its Latin American and Caribbean partners are considered, that ratio leaps to almost 9:1 reveals a report by the Organisation for Economic Cooperation and Development (OECD).
Also heavily criticised are archaic, non-import-friendly Customs laws, which differ from country to country in Latin America.
Francesc Casamitjana, chief executive of Agility GIL in the Americas, says these are some of the reasons why experience and knowledge of local laws can make or break an entire supply chain.
“If a shipment has incorrect documentation, for example, it will get stuck in Customs indefinitely and, potentially, incur substantial penalties,” he warns.
Local intelligence means that the Kuwait-based global logistics company continues to enjoy significant growth from inbound traffic, notes Nevino Rocco, vice-president of sales and marketing for Agility Americas.
“The majority of our cargo in Latin America is inbound traffic of higher value goods, such as industrial and manufactured goods and pharmaceuticals.
“Exports from the region are largely low-value commodities such as agricultural products, minerals and construction materials,” he points out.
Between 2007 and 2010, Agility made significant investments in the region, growing its footprint both through acquisitions and organic expansion, with special emphasis in the larger markets of Chile, Mexico and Brazil – “the engine of the region” – where the appetite for consumer goods among the growing middle classes seems “pretty resilient and consistent,” notes Casamitjana.
“The 2014 World Cup in Brazil and the 2016 Summer Olympics – only two years apart and requiring significant investments – are expected to continue to drive economic growth and, with it, trade growth from manufactured goods,” he predicts.
(Although, it must be noted, that anticipated pre-world cup spike in inbound traffic did not materialise.)
According to Rocco, Agility has been busy improving its presence in the other core countries in the region, such as Argentina and Colombia, through strategic partnerships.
“[But] over the last three years, the focus is less on geographic expansion through acquisition and more on consolidating and expanding our global capabilities into these local emerging markets,” he reveals.
This includes monitoring oil, gas and mining investments in the region as well as adding new experts to the team to meet the growing demand for logistics services.
Integrating data systems to give customers cargo visibility across the supply chain, as well as the ability to retrieve and review vital documents, such as mandatory local Customs entries and certificates, has become a big priority.
Developing niche markets is also on Agility’s to-do-list. “Another market we continue to develop is perishables (fish and seeds), particularly in Chile and Peru. This involves developing cool chain solutions,” says Rocco.
However the continent’s weak ground infrastructure casts a shadow over the future. It is a situation which has been fuelling a new trend over the last 12 months, whereby customers are increasingly requiring an all-in-one, integrated delivery service.
“More and more we see customers pushing us to invest where they see poor infrastructure, or shifting their capital risk to us providers. For example, in Brazil, we have received many requests from our customers to provide not only the forwarding and Customs brokerage services, but also local trucking and contract logistics business too,” Rocco reveals.
“While these investments can easily be contemplated in developed markets like the USA, the risk-return is much different in the emerging Latin America market, given the lack of infrastructure and immaturity of these markets,” he concludes.