Kuehne + Nagel registered a slight decline in airfreight volumes during the first quarter of the year on the back of a slowdown in market demand.
The Switzerland-based forwarder, which last year saw air cargo tonnage grow ahead of the market, reported a 0.3% year on year first-quarter demand decline to 304,000 tons with the overall market slipping by around 5%.
Part of the reason for the decline on the previous year was the industrial action at US west coast ports which pushed cargo to airfreight and provided a one-off boost in 2015.
However, the forwarder also reported tough market conditions, although there were some areas of growth.
“In the global airfreight market no significant positive growth stimuli were recorded; as a result, volumes declined towards the end of the quarter.
“In the previous year’s period, volumes were additionally increased by a temporary shift of goods from sea to airfreight due to the harbour strike on the US west coast.
“Kuehne + Nagel counteracted the unfavourable volume development in North and South America with strong export business in Asia, the Middle East and Africa, and thus, managed to keep overall tonnage stable at the previous year’s level.”
With volumes down on last year, it comes as no surprise that airfreight revenues were also behind the 2015 levels, declining by 5.5% to SFr944m.
But while revenues and volumes were down on a year earlier, Kuehne + Nagel did manage to improve airfreight profitability.
Gross profits climbed by 6.3% year on year to SFr235m and earnings before interest and tax (ebit) jumped 7.4% to SFr73m.
The overall company, including its ocean and overland segments, saw net turnover decline by 2.1% on a year earlier to SFr4bn.
Ebit climbed by 14.2% year on year to SFr217m. Earnings for the period increased by 10.5% to SFr169m.
Kuehne + Nagel chief executive Detlef Trefzger said: “The result of the first quarter 2016 confirms the successful implementation of our group strategy.
“We consider our market proximity and our understanding of current and future customer requirements as a solid basis for the further, positive development of our business.” 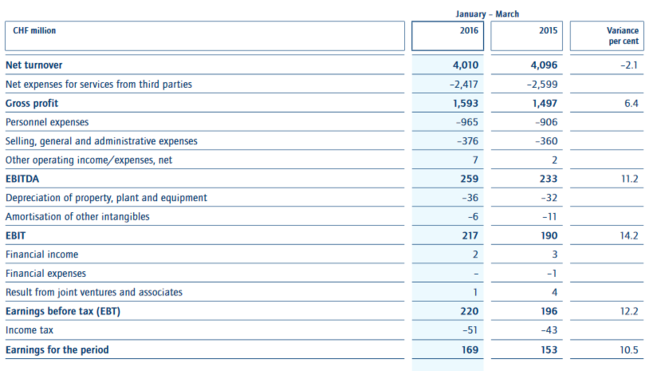