The transport and logistics industry remains optimistic about future growth in emerging markets despite concerns the world could retreat from free trade.
The 2017 Emerging Markets Index from Agility and Transport Intelligence (Ti) showed that 53% of respondents agreed with the International Monetary Fund’s estimate that emerging markets would grow by 4.6% in 2017, 4.2% said it was too pessimistic and 42.8% felt it was too optimistic.
The survey also revealed that 21.1% of the 800 respondents were ‘very concerned’ about threats to free trade, while 47.6% were ‘somewhat concerned’.
The survey results were revealed the day after US president Donald Trump signed an executive order to withdraw from the Trans-Pacific Partnership trade deal that would have cut 18,000 tariffs between 12 nations accounting for 40% of the world’s economic output.
However, Ti chief executive John Manners Bell said that despite concerns over free trade deals there was “more confidence than in the past”.
He said: “I think there was a broad level of optimism. When we have done the survey in the past Europe has been in a bad place in terms of economics and we are now seeing far more stability there.
“We are also seeing more growth in the US and like Donald Trump or not, he is very focused on economic growth and wants to double it. That will inevitability have a big impact on drawing in volumes from around the world, regardless of withdrawing from TPP.
“I do see that there is a stronger economic position that is inevitably going to have an impact on emerging markets.
“Even with withdrawing from the TPP, a lot of people see that as an opportunity for supply chains to focus around China instead.
“There may be some doom and gloom in some parts of the industry and some parts of the world but I don’t think the executives in Asia are going to be crying in the corner. They will be focussed on their own growth story. If that’s not with the US, it may well be with China instead.”
Agility Global Integrated Logistics chief executive Essa Al-Saleh added: “Trade is not going to suddenly stop because of a change in policy.
“The routes may shift from one market to another, but certainly the growth rates will remain positive, may be not as positive, but we will see.”
Looking at the index itself, Al-Saleh said that India was once again the standout country.
It was now ranked second in the overall index, which takes into account market size and future growth, market compatibility and market connectedness, climbing one place above the United Arab Emirates.
It also topped separate lists of countries with the most logistics potential and where respondents are most likely to invest.
“In addition to investment in road infrastructure, the [Indian] government has done a lot around reforming goods and service taxes that provides a consistent tax regime across the whole of India by not having different tax situations in different states.
“Having said that, one note of caution is on the government’s move to remove high denomination note rupees. The intention was right but maybe the execution was not as robust as we would have liked to have seen.”
China once again topped the overall list as its economy continues to grow at 6% even though growth rates have slowed down in recent years.
In total, 66% of respondents said they intended to continue with expansion in the country.
On the airfreight front the fastest growing emerging markets to the European Union (EU) and US (see charts below) last year were Mexico to the EU, Bangladesh to the EU and Cambodia to the EU.
In the opposite direction, EU to Vietnam, EU to Pakistan and EU to Colombia topped the list.
Other highlights saw Iran gain the most places in the index, rising eight places as sanctions begin to be lifted, just ahead of Uganda and Bahrain.
The biggest losers were Nigeria, which dropped nine places as commodity prices take a hit, and Tunisia.
Syria, Libya and Iraq had the least potential for investment, while India, Chain and Brazil had the most potential for investment.
The UAE, Malaysia, China, Chile and Saudia Arabia were ranked highly for their logistics and transport infrastructure, while Angola, Myanmar, Nigeria, Bangladesh and Venezuela did the least well.
The biggest problems with doing business in emerging markets were corruption, poor infrastructure, government policies, Customs procedures and security. 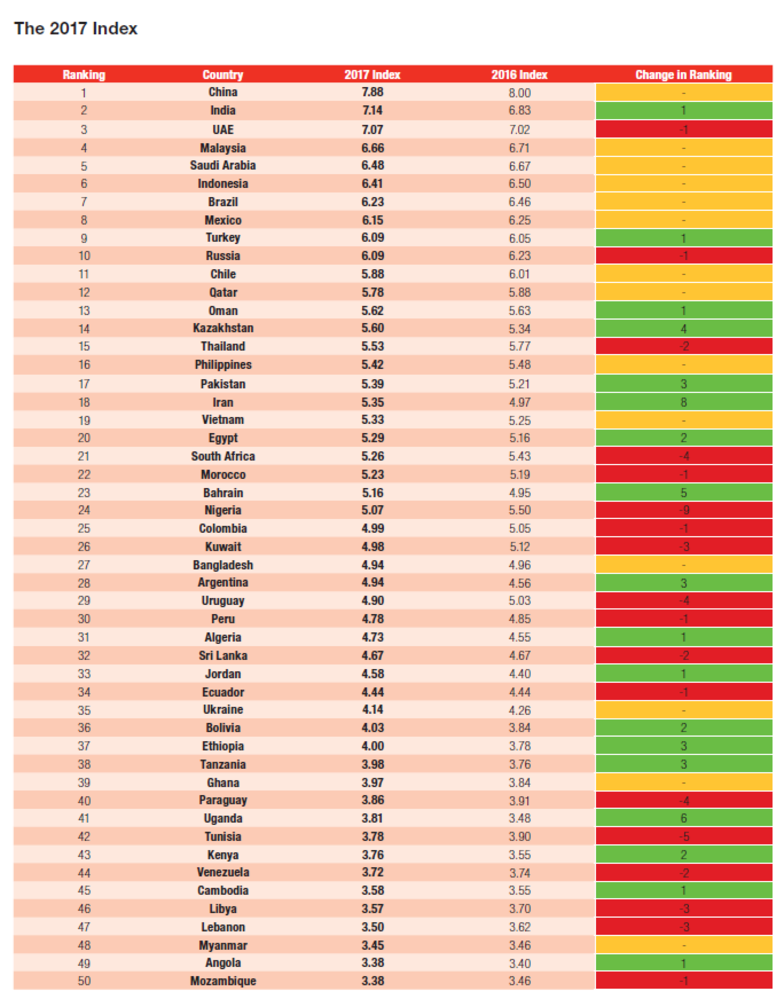 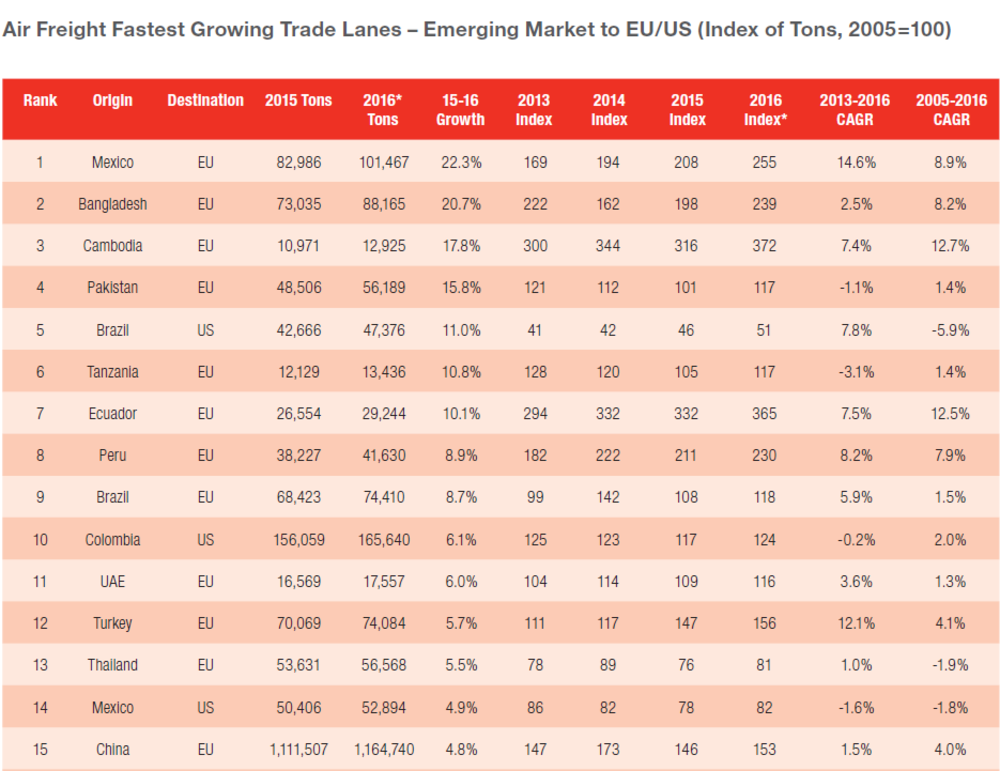 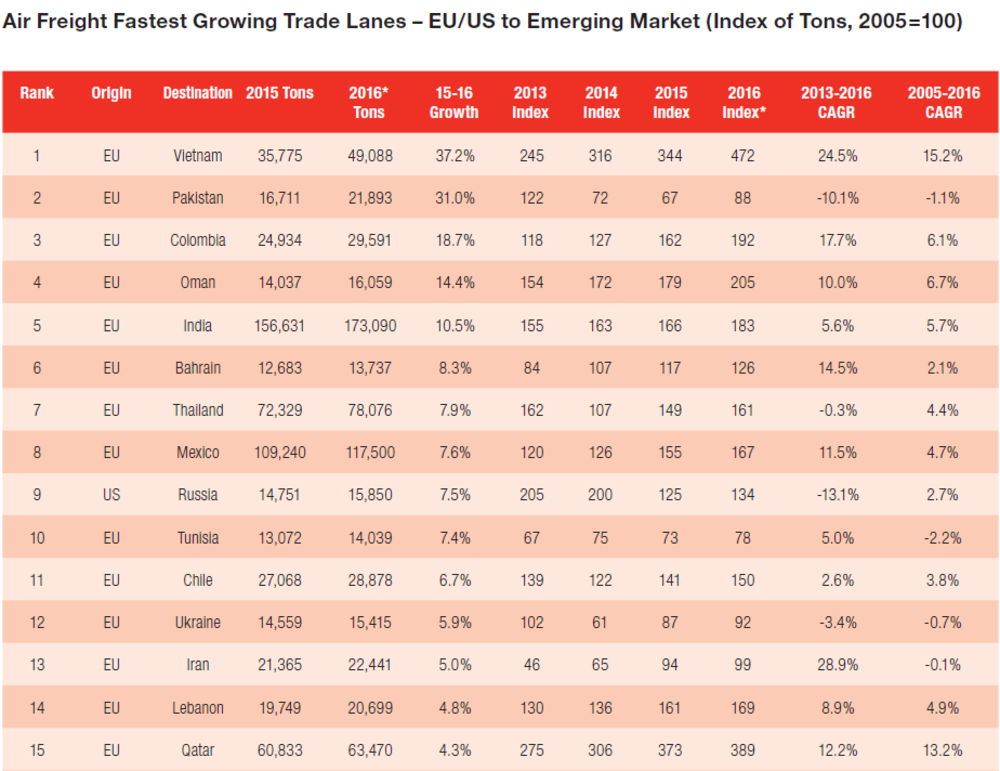