Europe’s leading airfreight forwarders had a mixed year in 2015, with Panalpina and DHL Global Forwarding reporting demand decreases and Kuehne+Nagel (K+N), DSV Sea and Air and DB Schenker benefitting from increases.
The forwarder that recorded the largest decrease in airfreight volumes was DHL Global Forwarding, which had a tough time of it in 2015.
The Deutsche Post-owned forwarder recorded a 7.3% year-on-year decline in airfreight demand to 2.1m tonnes. The overall market is estimated to have been flat in 2015. 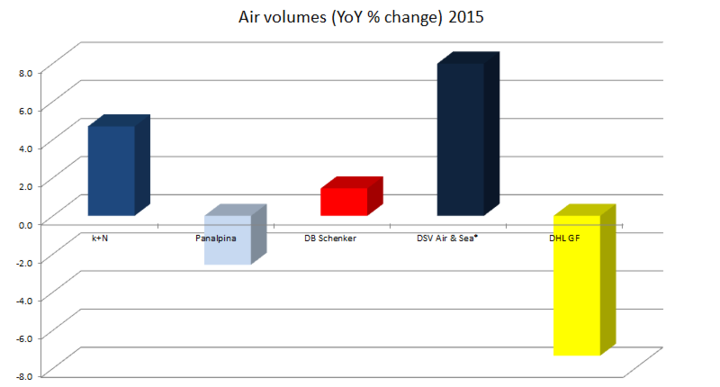 However, DHL still maintained its position as the world’s largest airfreight forwarder.
While the weak market conditions contributed to the forwarder’s volumes decline, recent years have seen it adopt a “selective growth” strategy where it turns away low margin business as it looks to improve profitability.
During DHL’s end-of-year results conference, Deutsche Post DHL chief executive Frank Appel indicated that there may be a change to this strategy in the future.
Appel said: “On the one hand I can say that our selective market strategy has been successful; we witnessed a good trend in our gross profit in second half of the year. We did accept that this went at the expense of volumes but now we are ready to grow again.”
The selective market strategy certainly appeared to result in improved gross profits for its airfreight business, which climbed by 1.2% year-on-year to €930m.
However, its gross profit margin on revenues remains lower than that of K+N, DSV and Panalpina at 18.6%.
Airfreight revenues were also down on last year, declining by 2.4% to €5bn as currency effects, volume declines and lower market rates took their toll.
The performance also comes against a backdrop of a well-publicised re-organisation at the forwarder.
The overall freight division recorded an earnings before interest and tax loss of €181m, primarily because of €336m it wrote off because of its decision to abandon the implementation of its troubled New Forwarding Environment (NFE) IT system.
Also, in late April, the company announced that Roger Crook, chief executive of the global freight forwarding arm, had stepped down for personal reasons, although industry rumours suggest his departure was linked to the roll-out of the transformation programme.
Since then, Appel has taken over as interim chief executive of DHL Global Forwarding, freight, and Renato Chiavi has been appointed interim chief executive of DHL Global Forwarding.
Looking ahead, Deutsche Post has announced a new plan to upgrade to its IT system that it said will help improve performance in 2016.
The new plan will use a step-by-step replacement of systems. This will rely on a “flexible IT architecture” that enhances existing systems whilst incorporating advanced “off-the-shelf ” solutions that have been proven within the freight forwarding sector.
The number two airfreight forwarder K+N recorded above market growth in its air cargo demand, which increased by 4.7% year on year to 1.2m tons.
This was the second largest increase of the forwarders analysed.
“A key factor in the good performance was the focus on industry-specific airfreight solutions, which led to significant business wins in the pharmaceutical, aerospace and perishables sectors,” the forwarder said.
K+N added that its FreightNet online booking portal, which provides instant quotes for airfreight services and freight tracking, also proved to be “an effective new sales channel”.
Airfreight revenues declined by 4.6% on 2014 levels to Sfr4bn as a result of currency effects and lower market rates.
K+N’s air gross profits increased by 2.7% to Sfr904m, while its gross profit return on revenues was the second best of the four forwarders. 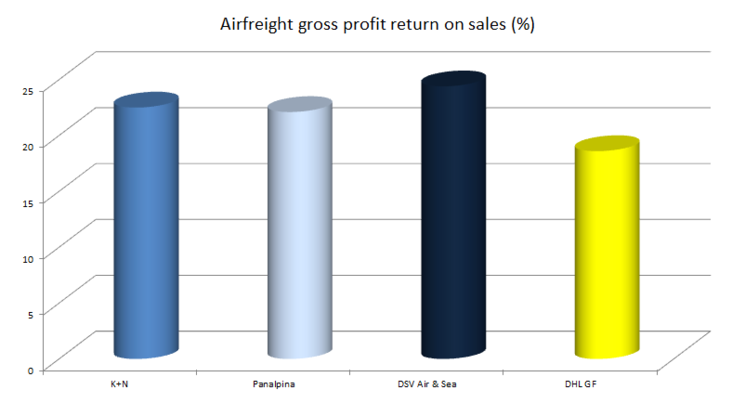 K+N chief executive Detlef Trefzger said: “We are proud that in a challenging environment we were able to further increase profitability and once again achieve a new record result.
“This positive performance was driven by both the effectiveness of our efficiency programmes and the successful implementation of strategic initiatives.
“It is our customer proximity and understanding of future customer requirements, that enables us to innovatively expand our service portfolio in line with the market.”
The fastest growing of the five forwarders was DSV Sea and Air, which recorded an airfreight demand increase of 8% to 311m tonnes. 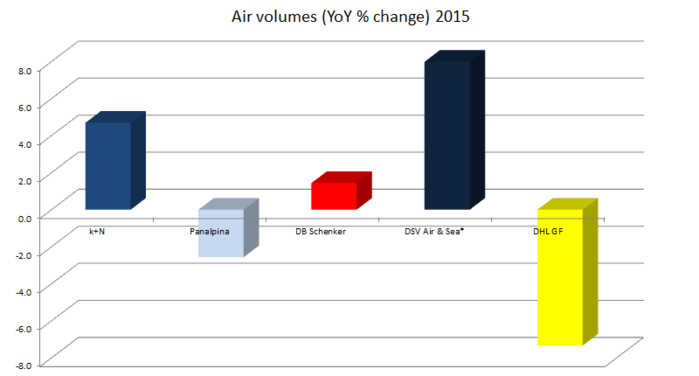 Airfreight revenues climbed by the lower amount of 2.7% to Dkr9.2bn, with the extra volumes having a positive impact but lower market rates taking their toll. However, DSV was the only one of the four forwarders to record an increase in revenues.
Airfreight gross profits also increased, jumping by 16.8% to Dkr2.2bn, while its gross profit margin of 24.4% was higher than the others.
Gross profits were positively affected by exchange rate effects and growth in airfreight volumes.
An increasing number of value-added services per shipment also had a positive effect on earnings per shipment, the forwarder said.
DSV also noted a trend towards larger customers using its airfreight services.
“Having for many years focused on small and medium-sized customers, who still make up the major part of our customer base, we have in recent years seen an inflow of large, global customers,” the company said.
DSV will receive a boost this year from its $1.35bn takeover of UTi, a move which will create the world’s eighth largest airfreight forwarder.
However, UTi has struggled with profits in recent years. DSV has said this is down to its network exceeding the volumes it carries, but it will be interesting to see the takeover’s effect on the Danish group’s profitability.
Last year also ended up being a tough 12 months for Switzerland-based Panalpina as it saw airfreight demand decline by 2.6% year on year to 836m tons.
As a result of currency effects, weaker market rates and the volume declines, air revenues slipped by 15.8% on the previous year to €2.6bn. This was the largest percentage drop of the four forwarders that reports air revenues. 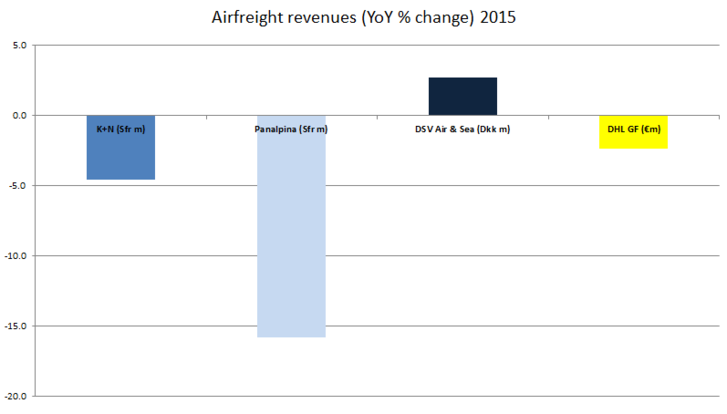 Panalpina was also the only of the four forwarders to record a decline in air gross profits, which slipped by 8.2% to Sfr€584m.
Looking forward, Panalpina expects the tough market conditions to remain, but it was optimistic about its own strategy.
Panalpina aims to boost marketshare by optimising its charter network still further and building volumes in areas such as the perishables sector, which should lessen dependence on cyclical business.
The acquisition of Airflo, Kenya’s second-largest air freight forwarder and one which specialises in the export of flowers and vegetables, should not only increase Panalpina’s perishables tonnages but also ensure substantial volumes on routes northbound out of Africa.
It also hopes to benefit from a new IT system which is currently in the process of being rolled out across the business.
Finally, DB Schenker, which does not release airfreight financial figures, grew just ahead of the market with a demand increase of 1.4% year on year to 1.1m tons.
While growth in percentage terms lagged behind DSV and K+N, the German forwarder remains the world’s third largest airfreight forwarder.

2020 in numbers: The year of freighters and preighters

By Chris Seymour, head of market analysis, Ascend by Cirium

The airfreight sector had just come out of its worst year for traffic in a decade, driven by weak global…