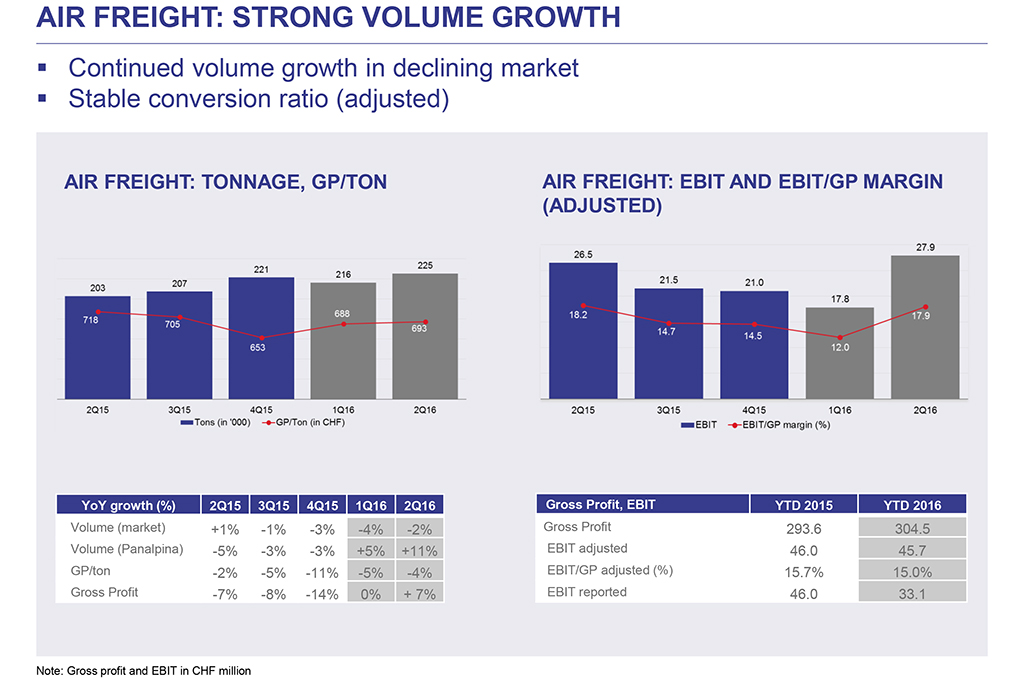 Panalpina has reported on a challenging six months of operations for its airfreight arm, and right across its business.
Airfreight volumes rose by 8% year on year over the first six months of 2016, although the market had – the Switzerland based logistics player said – shrunk by 3%.
However, much of that growth in airfreight – 6% in fact – came from companies acquired by Panalpina.
The perishables market proved a lucrative one, growing year on year in terms of tonnages handled, although lower volumes across the oil and gas sector hit the bottom line.
Profitability across Panalpina’s air cargo business, as measured in terms of gross profit per ton of airfreight, fell by 4% from CHF720 ($729) in the first half of 2015 to CHF690 ($699) in the first half of this year.
However, gross profit across the company’s airfreight business still rose, from CHF293.6m ($297m) in the January–June period of 2015 to reach CHF304.5m ($308m) in the first half of this year.
Over the course of that period, the global supply chain services provider’s total net forwarding revenue amounted to CHF2,596.5m ($2,630m), down on the figure of CHF2,941.4m ($2.979m) achieved in the same period of 2015.
Gross profit rose very marginally year on year, however, from CHF736.1m ($745.6m) to CHF736.3m ($745.8m).
The forwarder’s business over the first six months of 2016 was hit hard by the depressed oil and gas market. And, explains Panalpina chief executive Peter Ulber: “During the second quarter it became evident that the oil and gas business will not bounce back any time soon.
“Therefore we decided to realign our capabilities with the current volumes and not wait for the market to recover. We took the full restructuring costs in the second quarter instead of later,” he observed.
More positively: “The encouraging news is that the rest of the business continued to show considerable robustness against the backdrop of receding markets in air and ocean freight.
“The underlying profitability remained stable for the first half year,” Ulber added, continuing: “We still consider the oil and gas industry as a strategic business and are confident that we have taken the right measures in a market that is steadily stabilising.
“In all other industries, our business has shown good momentum and we expect this to continue throughout the year.”
Finally, Ulber noted: “Cost control remains a key priority as we continue to balance our business and product mix.”
Panalpina came sixth on the list compiled by consultant Armstrong & Associates of the world’s top freight forwarders as measured by airfreight volumes handled during 2015. Second on that list was Kuehne + Nagel (K+N), another Switzerland-headquartered logistics giant.
K+N reported its half-year results yesterday (19 July), and they make for interesting comparison with those offered by Panalpina.
Both forwarders managed to increase their airfreight volumes year on year, Panalpina more so because of the companies that it acquired that are active in this sector.
Both logistics services providers also saw the profitability of their air cargo businesses improve slightly in what they agreed was a challenging period.
Both companies’ senior executives also offered a positive outlook on this second half of 2016, despite the pressure on margins being experienced right across the freight forwarding industry.